Matter is our surrounding of Class 9

Everything in this universe is made up of material which has been named ‘matter’ by scientists. The air we breathe, the food we eat, the water we drink, stones, clouds, stars, plants and animals or a particle of sand – everything around us is matter. 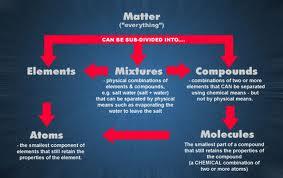 Since early times, human beings have been trying to understand their surroundings. Early Indian philosophers classified matter in the form of five basic elements – the “Panch Tatva” – air, earth, fire, sky and water. According to them, everything living or non-living, is made up of these five basic elements.

There are a large number of things around us which we see and feel. For example, we can see a book in front of us. A book occupies some space. The space occupied by the book is called it volume. If we pick up the book, we can also feel its weight. So, we conclude that the book has some mass. We cannot see the air around us, yet if we fill a balloon with air and then weight it carefully, we will find that not only does air occupy space (bounded by the balloon), but is also has mass.

Things like a book and air are examples of matter. Other examples of matter are wood, cloth, paper, ice, steel, water, oil etc. Further, that matter offers resistance is borne out by the fact that we cannot displace an object from one place to another without applying some force. We have to apply force to pick up a stone from the ground. Thus, matter can be defined as follows:

“Anything that occupies space, has mass and offer resistance is called matter.”

Plasma: The fourth state of matter, It is a hot ionized gas consisting of equal number of +ve and –ve charged ions and electrons because it is made up of electrically charged particle so influence by electric and magnetic fields.

Matter exists in three physical state Solid, liquid and gas. In Solid the molecule are closely packed, In Liquids lossely packed where as in Gas there is no force of attraction between molecules

Particle Nature of Matter – Matter is made up of particles:

To show the particle nature of matter, we perform the following experiment:

Experiment: Take about 50ml water in a graduated cylinder and dissolve small amount of common salt (NaCl) or sugar in it with the help of a glass rod. 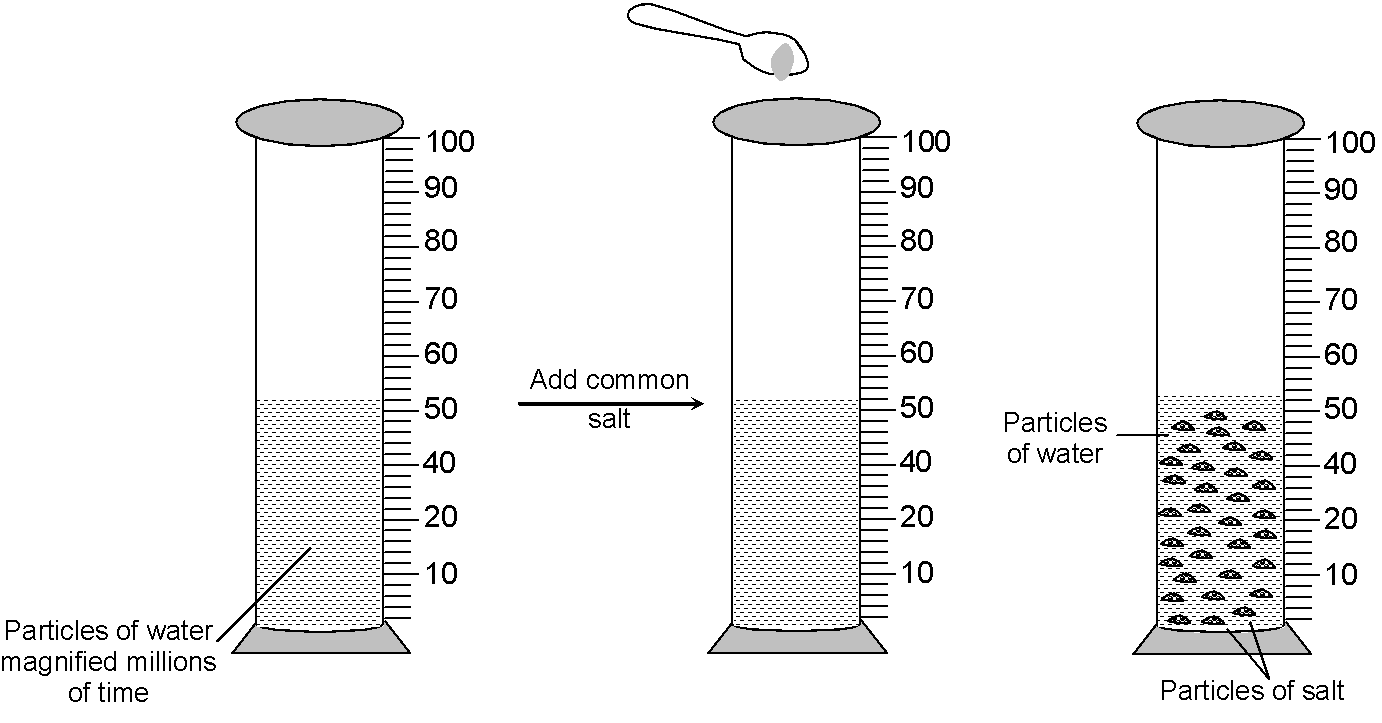 Conclusion : From above experiment, we led to conclude that, there are some spaces between the particles of matter, or in other words matter is made up of particles.

How small are these particles of matter?

To know how small are the particles of matter from which they are made up of, let us perform the experiment:

Estimating how small are the particles of matter. With every dilution, though the colour becomes light, it is still visible.

Conclusion : From above experiment we conclude that “matter is made up of extremely small particles which can not be seen even with a powerful microscope.

Characteristics of Particles of Matter :

The important characteristics of particles of matter are the following :

(i) The particles of matter are very, very small : It can be explained by performing the following experiment. We will dissolve 2 or 3 drops of indigo dye in 100 ml of water. We will get a deep blue coloured solution. Now we will keep diluting the solution and we will observe that intensity of blue colour of indigo dye solution goes on decreasing.

(ii) The particles of matter have spaces between them :

(A)Experiment : We take about 100 ml of a water in a beaker and mark the level of water. We will also take 50 g of sugar. Now we will dissolve the sugar by stirring and we get 3 sugar solution.

(B) Conclusion : The level of sugar solution in the beaker is at the same mark where water level was initially in the beaker.

It shows that particles sugar go into the spaces between various molecule of water due to which there is no change in the volume. Thus, from this experiment it can be concluded that, the molecules in water are not tightly packed, they have spaces between them.

(iii) The particles of matter are constantly moving : This property can be explained by diffusion.

Diffusion : “Intermixing of particles of two different types of matter on their own is called diffusion.” It is the phenomenon in which the movement of molecules or particles occur from their higher concentration towards their lower concentration.

e.g. : When a perfume bottle is opened in one corner of a room, its fragrance spreads in the whole room quickly. This happens because the particles of perfume move rapidly in all directions and mix with the moving particles of air in the room.

Cohesive Force : The force of attraction between the particles of different substances is called adhesive force.

NCERT solutions for class 9 Science prepared by pw will help you to solve your NCERT text book exercise.