Most common frog  found in India is the Indian bullfrog Rana tigrina found in or near freshwater lakes, streams and ponds. Found all over world except Australia, New Zealand.

Being cold-blooded or poikilothermous (the body temperature changes with environment) frogs undergo aestivation or ‘summer sleep’ in summer and hibernation ‘winter sleep’ in winter. They become metabolically inactive and stop feeding, respire only with skin, i.e., cutaneous respiration. It never drinks water, absorbs water through skin.

The dorsal surface of frog is spotted olive green and ventral pale yellow; this protective colouration help to camouflage, i.e., escape the detection by enemies.

Male and female frogs are distinguishable externally only during breeding season when the males develop roughened nuptial pads on the bases of the thumb. Nupital pads help male in holding female, a sexual embrace called amphlexus (false copulation).

The characteristic noise or sound produced by frogs is called croaking. Males produce louder sound as compared to the females due to the presence of a pair of distensible balloon-like vocal sacs, which act as resonators.

The body of a frog is dorsoventrally flattened. It is somewhat spindle-shaped and streamlined so as to get least resistance during swimming in water or hopping in air. The size of body is also helpful in its movement. The body is spotted olive green on the dorsal side & is pale yellow on the ventral side. Its body colour offers  it protection from the enemies (protective colouration camouflage).

The frog body is divisible into two parts : head and trunk. Neck is absent to help in hopping. Tail is present only with its larval form (tadpole larva).

The head is flat and triangular with blunt snout. These features help it in burrowing in mud during hibernation (winter sleep) or aestivation (summer sleep).

Mouth is terminal with wide gap. Cheeks and lips are absent.

A pair of small circular external nares/nostrils are located at the tip on dorsal side. It leads into nasal chambers which open by internal nares/ choanae into anterior part of the buccal cavity. 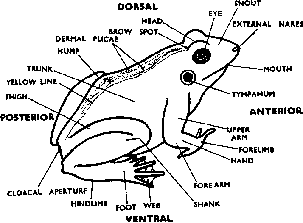 Fig. External morphology of frog
External nares are guarded by a membranous valve. These valves keep the external nares closed while in water or during hibernation/aestivation.

A pair of large spherical & protruding eyes are located almost laterally upon top of the head. There are no bony sockets in the skull. Eyes are located in large depressions of the soft skin of the roof of buccopharyngeal cavity. The frog can rotate its eyes in different directions. This compensates the absence of neck.

Eyes are provided with a pair of eyelids. Upper eyelid is thick and immovable. The lower eyelid is movable. The main distal part of it is a thin transparent nictating membrane which completely covers the eyes to protect them from water or mud without affecting normal vision.

A vestige of a functional third eye is present as a small, circular and light coloured brown spot in between two eyes.

Behind each eye is present a deep pigmented circular patch of tough membrane-like skin, called eardrum or tympanic membrane. It receives sound waves from the environment. There is no external ear in frog.

Trunk bears two pairs of legs. The forelimbs are smaller but stronger. It consist of:

(i) Upper arm or brachium

(ii) A forearm or antebrachium

(iii) A hand or manus bearing 4 digits or fingers. Thumb or pollex is absent.

Hindlimbs are long and consist of (i) thigh (ii) shank or crus (iii) and a foot or pes bearing 5 digits or toes.

During rest, hindlimbs are flexed in the form of Z with knee pointing forward and outward and feet resting upon the ground toes of hind limbs are joined together by a thin web of skin fold which is an adaptation for both leaping and swimming. The swift straightening of the fully flexed hindlimbs give a jerk or thrust and acceleration required for progression.

Forelimb has four digits and hindlimbs have five digits. Forelimbs take no part in swimming. 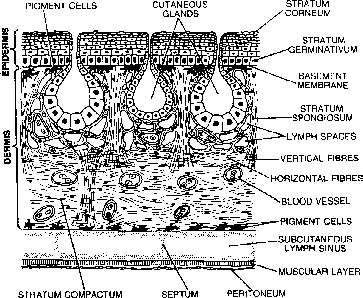 Fig. V.S. of the Skin of Frog (generalised)

Life cycle of cockroach is simple.

Copulation : Female secretes yellow coloured pheromones for attracting males. During copulation spermatophore of male is attached with spermatheca of female.

Fertilization : Fertilization takes place in female genital chamber. From 16 ovarioles, 16 ova are released, which are arranged in ootheca after fertilization.

Formation of ootheca : Secretion of collaterial glands form ootheca. Wall of ootheca is formed of scleroproteins.

Developement : Eggs are polylecithal, centrolecithal and cleidoic. Cleavage begins in ootheca. Cleavage is meroblastic and superficial. Within ootheca, 16 nymphs develop in 5 to 12 weeks. Ootheca ruptures and nymphs are liberated.