Theories of Origin of Life

Origin and Evolution of life of Class 12

There are many theories about how life arose on earth.

A few historical ideas which gained acceptability in their times are :

Van Helmont (1642) claimed rat to arise from sweat-soaked dirty clothes if kept in dark bran-house for 20 days with wheat grains.

Francesco Redi (1621–1697); Spallanzani (1729–1799) tried to disprove this theory experimentally but their plea were rejected by people like Leeuwenhoeck, Buffon, Huxley, Newton & others

Louis Pasteur (1862) finally disproved it by his experiment of “Swan necked flask”; in sterilized sugar syrup the microorganisms could grow only when polluted air (with spores) passed into it.

Cosmozoic theory or Extraterrestrial theory or Theory of Panspermia:

But it seems illogical as life can not survive while passing through cold, dry and radiating space.

Theory of catastrophism (or cataclysmus) :

Lucretius, a Roman philosopher believed in gradual change in living being similar to Greek thoughts.Empedocles was called “Father of concept of evolution” by Osborn (1896). Buffon (1707-1788), the father of modern concept of evolution was the first serious naturalist to talk about “evolving living forms”. Erasmus Darwin (1731–1802), the grand father of Charles Darwin, proposed about “species changing by modification” in his book Zoonomia on evolution.

Theory of Terrestrial or Abiogenic Origin:

Life arose by series of “sequential chemical reaction” from nonliving (inorganic) matter. There is general consensus of scientific opinions hence also called as Modern Theory or Scientific hypothesis or the Naturalistic Theory or Theory of chemical origin. Charles Darwin (1857), Joseph Hooker, A.I. Oparin (1923) and J.B.S. Haldane (1929) supported it Oparin named it as materialistic theory in his book, Origin of Life (1938).

A.I. oparin (1923) a Russian and J.B.S. Haldane (1929) a British said that first life originated from nonliving things at some point of time in very long past when conditions on earth would have been very different. Hence it was first by abiogenesis and then biogenesis ever since. Primitive earth had no oxygen (in free gaseous form) but only as bound in water and some metallic oxides on surface of rocks, hence it was reducing atmosphere.The sequence of change, an 8-step process, begins right from the formation of earth. 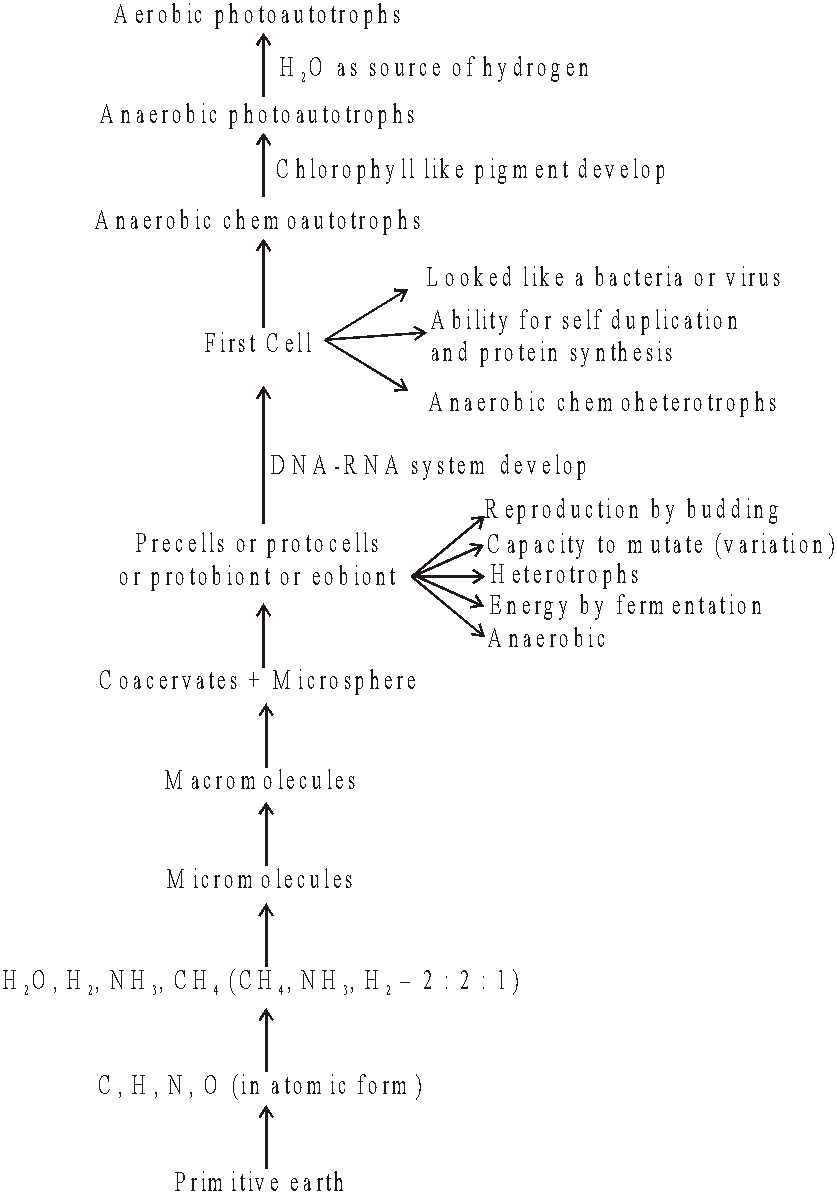 The hot (5000–6000ºC) rotating clouds of atoms got condensed and segregated in 3 concentric layers due to rotational and gravitational forces and gradual lowering of temperature. The heaviest metallic atoms like Fe, Ni, Cu, Au, Ag etc. came in the centre to form core (hot boiling), the next heavy elements like Ca, Mn, Na, K, Si, Al, S & P deposited around the core as shell and lightest like C, O, H, N etc. remained in outermost layer to form the gaseous atmosphere.

Atoms coming closer formed molecules, the outer layer got solidified while inner core remained boiling which used to erupt as volcanoes at times; the hot lava combined with C & N of atmosphere and formed carbides and nitrides appearing as rocks (lithosphere). H2 being most numerous combined with all O2 to form water molecules (initially as vapour). Similarly NH3, CO2, CO were also formed. With further decrease in temperature, water drops began forming, resulted in rains → further cooling of earth surface → resulted in stay of water on earth surface → covered with water (hydrosphere) containing chlorides and phosphates formed by erosion of rocks.

Interaction of chemicals in atmosphere, hydrosphere and lithosphere led to formation of various organic molecules, and energy for this came from heat, lightening, radiation (cosmic rays), gravitational forces etc.