Since torque is a rotational analog of force, therefore, Newton’s second law for rotational motion is given by

Note that the above equation (10.21) is not a vector equation.

It is valid in two situations:

(i)The axis is fixed in position and direction.

(ii)The axis passes through the center of mass and is fixed in direction only.

is valid even if the center of mass is accelerating.

(a)What is the angular velocity of the pulley 3 s after the block is released?

(b)Find the speed of the block after it has fallen 1.6m. Assume the system starts at rest. 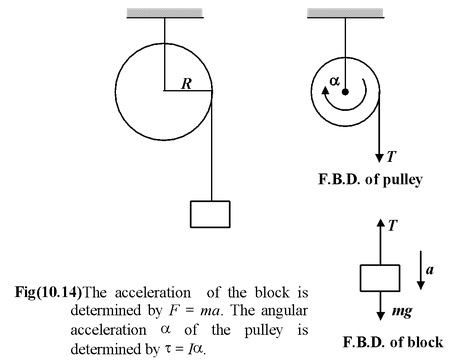 Since the string is tangential to the pulley, the torque on it due to the tension is τ = TR. The two forms of Newton's second law for the block and the pulley yield

Since the block and the rim of the pulley have the same speed (the string does not slip), we have v = ωR and a = αR. Thus, from equation (i) we find

Adding (ii) and (iii) leads to

(b)To find the speed of the block we use

Since the string is tightly wrapped over the pulley, therefore,

We choose the initial sense of the angular velocity as positive. The force of friction is
f = μkF and its (counterclockwise) torque is τ = -fR.

The angular rotation θ of the wheel is given by

Net torque about the point O is

This is greater than the acceleration of an object in free-fall.