We know by experience that all bodies in nature interact in some way with one another. Force is a measure of the interaction of bodies or of the particles of which the bodies consist. The force may produce either deformation (change in the size or shape of bodies) or acceleration (change in magnitude or direction of velocity). Force is a vector quantity. Every force has a definite direction and the result of its action depends on the direction and the magnitude of the force.If several forces are applied to a particle, they can be replaced by a resultant force. This resultant is the vector sum of the forces and can be found by any of the methods illustrated earlier.

A force is defined as an external cause which, when applied, changes or tends to change the state of a body; if the body is in motion, it is brought to rest, and if it is at rest, then it is set in motion. It can also cause a change in the direction, shape, size, etc. Example: Pushing or pulling a door using force.

Force is a vector quantity, meaning it has both magnitude and direction. Newton's second law states that force is "the product of the body's mass and acceleration." 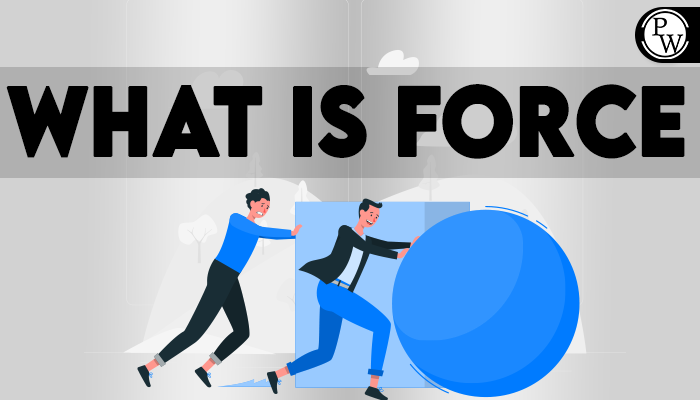 "Newton(N)" is the SI unit of Force. The basic units are:

Energy is defined as the rate at which a force changes. With a constant weight, this equals the speed of x.

What are the Effects of Force?

In physics, motion is known as the change in position with respect to time. In simpler terms, motion refers to the movement of the body. Movement can usually be described as:

The force has different effects, and here are some of them.

The Force is expressed by the vector product of (m) mass and (a) acceleration. The formula of Force can be expressed as:

Acceleration a is given by

So Force can be calculated as:

The inertia formula is p = mv which can also be articulated as Momentum.

Thus, Force can be calculated as the rate of change in Momentum.

There are two types of forces:

Contact Forces is defined as the force that act on a body either directly or through a medium.

The weight of a body is a force that pulls the body directly towards the earth. The force is due to gravitational attraction between two bodies. We will discuss this in detail later. Here, we consider an object of mass m located at a point where the free fall acceleration has magnitude g. Then the magnitude W of the weight is

Its direction being vertically downward (toward the centre of the earth).

The normal force is the component of the contact force that is perpendicular to the surface. It is a measure of how strongly the surface in contact are pressed together. Example push your hand straight down on the table. The force you feel resisting your push is the normal force of the table pushing up on your hand.

As you may have discovered for yourself, springs resists attempts to change their length. In fact, the more you alter a spring’s length, the harder it resists. The force exerted by a spring may be represented as:

where x is the change in length, and k is the stiffness constant or simply, the spring constant. Unit of spring constant is N/m. This equation is also known as Hooke’s law. The minus sign in Hooke’s law shows that the direction of the force exerted by the spring is opposite to the displacement that produces it.

The spring constant depends on geometry of the spring and on the material property. For us, it is important to know that the spring constant is inversely proportional to its length, other things remaining the same. i.e. k is inversely proportional to l(everything else constant) Therefore if you cut a spring into two parts whose length are in ratio 1 : 2, their spring constants will be in ratio of 2 : 1. As in case of rope, we will usually deal with a massless spring, the force at each point of which is the same. Such spring and ropes are normally referred to as ideal.

Non-contact forces are defined as the forces that act through spaces without making direct contact with the body. Example, a ball is thrown up in the air; it will come back due to the gravitational force, that is Non-contact force. There are three types of Non-Contact Force:

Q2. Annie has a toy car mass of 4 kg. How much force should she apply to the car so that it should travel with an acceleration of 10 m/s2?

Q3. A hammer with a mass of 2 kg and a speed of 4 m/s hits a wall and then comes to rest in 0.2 sec. Calculate the obstacle force that makes the hammer stop.

Q1. What is force in physics?

Ans. In Physics, force is defined as the pull or push on an object with mass causes it to change its velocity. Force is an external agent capable of changing a body's state of rest or motion. It has a magnitude and a direction.

Q2. What are some examples of force?

Ans. Some examples of force are:

Ans. Gravity is known as the force by which a planet or other body draws objects toward its center. The gravity keeps all of the planets in orbit around the sun.

Q4. What is the unit for force?

Ans. Newton is the S.I unit of force, that is represented by N.

Q5. How is force calculated?

Ans. It is calculated by the equation: Force (N) = mass (kg) × acceleration (m/s²). Thus, an object of constant mass accelerates in proportion to the force applied.