Area Related To Circles of Class 10

The set of points which are at a constant distance of units from a fixed point O is called a circle with centre O and radius = r units. The circle is denoted by C(O, r).

The fixed point O is called the centre and the constant distance r units is called its radius.

(i) If two circles touch internally, then the distance between their centers is equal to the difference of their radii.

(ii) If two circles touch externally, then the distance between their centers is equal to the sum of their radii.

(iii) Distance moved by a rotating wheel in one revolution is equal to the circumference of the wheel.

(iv) Number of revolutions completed by a rotating wheel in one minute:

(v) Angle described by minute hand in one minute = 6o.

The perimeter (or length of boundary) of a circle is called its circumference.

A continuous piece of a circle is called an arc of the circle.

In the given figure, PQ is an arc of a circle, with centre O, denoted by

. The remaining part of the circle, represents

An angle subtended by an arc at the centre of a circle is called its central angle.

In the given figure of a circle with centre O, central angle of

is called the minor arc and the arc

is called the major arc.

A diameter divides a circle into two equal arcs. Each of these two arcs is called a semicircle.

In the given figure of a circle with centre O, 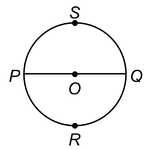 A segment of a circle is the region bounded by an arc and a chord, including the arc and the chord.

The centre of the circle lies in the major segment.

SECTOR OF A CIRCLE:

The region enclosed by an arc of a circle and its two bounding radii is called a sector of the circle.

In the given figure, OPRQO is a sector of the circle with centre O.

If arc PQ is a minor arc then OPRQO is called the minor sector of the circle.

One-fourth of a circular disc is called a quadrant. The central angle of a quadrant is 90º.

Circumference and area of a circle

For a circle of radius r, we have

(i) Circumference of the circle = 2πr

Area of a ring

Let R and r be the outer and inner radii of a ring.

(ii) Number of rotations in 1 minute =

Rotation of the hands of a clock

It is given that : diagonal of rectangle = diameter of a circle

Question 2. What is the ratio of the areas of a circle and an equilateral triangle whose diameter and a side are respectively equal?

Solution: Length of the fence

So, circumference of the field

Therefore, if r metres is the radius of the field,

Therefore, area of the field

So, total cost of ploughing the field

Question 4. A circular park, 42 m in diameter, has a path 3.5 m wide running round it on the outside. Find the cost of gravelling the path at Rs. 4 per m2. 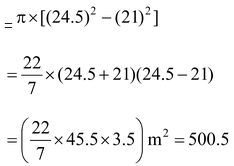 Question 5. The radii of two circles are 8 cm and 6 cm respectively. Find the radius of the circle having area equal to the sum of the areas of the two circles.

Solution: The area of the circle having radius 8 cm

The area of the circle having radius 6 cm

Sum of the areas of the two circles

Let, if r be the radius of the circle which has area equal to the sum of the areas of the two given circles, then

Hence, the required radius is 10 cm.

Question 6. A bicycle wheel makes 5000 revolutions in moving 11 km. Find the diameter of the wheel.

Solution: Distance covered by the wheel in 1 revolution

Let the diameter of the wheel be d cm.

Hence, the diameter of the wheel is 70 cm.

Question 7. The diameter of the wheels of a bus is 140 cm. How many revolutions per minute must a wheel make in order to move at a speed of 66 km per hour?

Solution: Distance covered by a wheel in 1 minute

Circumference of a wheel

Number of revolutions in 1 min

∴ Circumference of the circle = Length of the wire = 44 cm

Let the radius of the circle be r cm