Control And Coordination of Class 10

The human nervous system can be further divided. 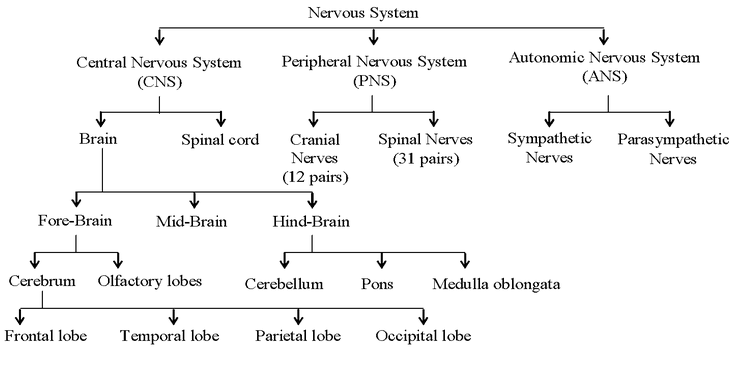 Within the central nervous system is a system of hollow cavities called ventricles. The network of linked cavities in the brain (cerebral ventricles) is continuous with the central canal of the spinal cord. The ventricles are filled with cerebrospinal fluid which is produced by specializedepitheliumlocated within the ventricles called the choroid plexus. Cerebrospinal fluid surrounds, cushions, and protects the brain and spinal cord from trauma. It also assists in the circulation of nutrients to the brain.

The brain is the control center of the body. It consists of three main components: the forebrain, the brainstem, and the hindbrain. It is soft, whitish, large sized structure present inside cranial cavity of cranium of the skull. In man, it is about 1200-1400 gm in weight and has about 10,000 million neutrons.

Cranium protects brain from external injuries. The brain is also protected by the meninges and the cerebrospinal fluid. Meninges are made up of three layers i.e., duramater, arachnoid and piamater from outside to the inside.

It consists of two cerebral hemispheres joined together by a broad curved thick band of nerve fibres called corpus callosum. It has an outer thick layer of grey matter, called cerebral cortex, made of cell bodies of billions of nerve cells.

Olfactory lobes: A pair of bodies covered by cerebrum. It is not so developed in humans. It is concerned with olfaction (smell).

Cerebrum: It forms about two-third of the brain. Different areas of cerebrum perform different functions. Association areas control learning, reasoning, intelligence, personality, thinking, memory, etc. Sensory areas give us sensation by receiving information from eyes, ears, nose, tongue, skin. Motor areas give instructions to muscles for various voluntary actions. However, certain sensations are distinct from seeing or hearing, for example, how do we know that we have eaten enough? The sensation of feeling full is because of a centre associated with hunger, which is in a separate part of the fore brain.

Thehindbrainextends from the spinal cord and contains structures such as theponsandcerebellum. These regions assist in maintaining balance and equilibrium, movement coordination, and the conduction of sensory information. The hindbrain also contains themedulla oblongatawhich is responsible for controlling such autonomic functions as breathing, heart rate, and digestion. 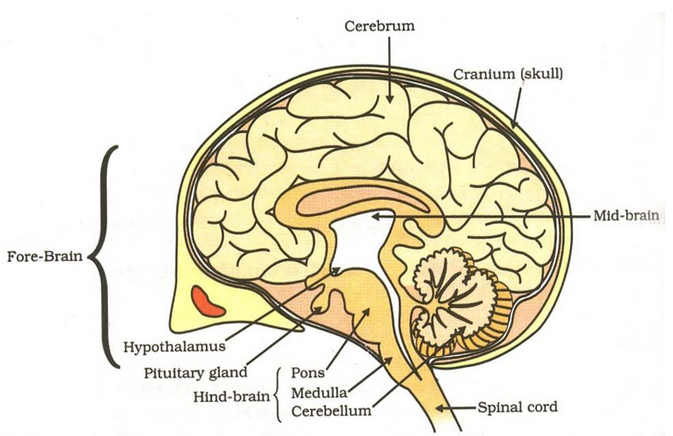 Neuronsare the basic unit of the nervous system. All cells of the nervous system are comprised of neurons. Neurons contain nerve processes which are "finger-like" projections that extend from the nerve cell body. The nerve processes consist of axons and dendrites which are able to conduct and transmit signals. Axons typically carry signals away from the cell body. They are long nerve processes that may branch out to convey signals to various areas. Dendrites typically carry signals toward the cell body. They are usually more numerous, shorter and more branched than axons. Axons and dendrites are bundled together into what are called nerves. These nerves send signals between the brain, spinal cord, and other body organs via nerve impulses. Neurons are classified as either motor, sensory, or interneurons. Motor neurons carry information from the central nervous system to organs, glands, and muscles. Sensory neurons send information to the central nervous system from internal organs or from external stimuli. Interneurons relay signals between motor and sensory neurons.

Reflex action: A reflex action may be defined as a spontaneous, involuntary and unconscious (without will) response of the effectors to a stimulus.

Reflex action was first discovered by Marshall Hall in 1833.

Best and Taylor defined action as an automatic involuntary and often unconscious action.

Reflex action is a elementary function discharged by the nervous system. It is important in protective behaviour such as the withdraw also of the limbs from pain and in locomotion and is standing.

”A reflex action works in the following ways :

lReceptor organ : It receives the stimulus and initiates a sensory nerve impulse.

lSensory nerve fibre : It conducts impulses from receptor to the spinal cord.

lSpinal cord : It acts as modulator and changes sensory impulses into the motor impulse.

lEffector organ : It gives the response. This produces either the movement of some muscles or secretion from a gland.

” Reflex travels in the following sequence :

It controls involuntary activities of internal organs such as heart, blood vessels, glands & smooth muscles of alimentary canal & uterus. It is subdivided into

Organs receive nerves from both sympathetic and parasympathetic nerve fibres. They have opposite effects on the organs if one is stimulatory, the other is inhibitory.

Effects of Sympathetic and Parasympathetic System : 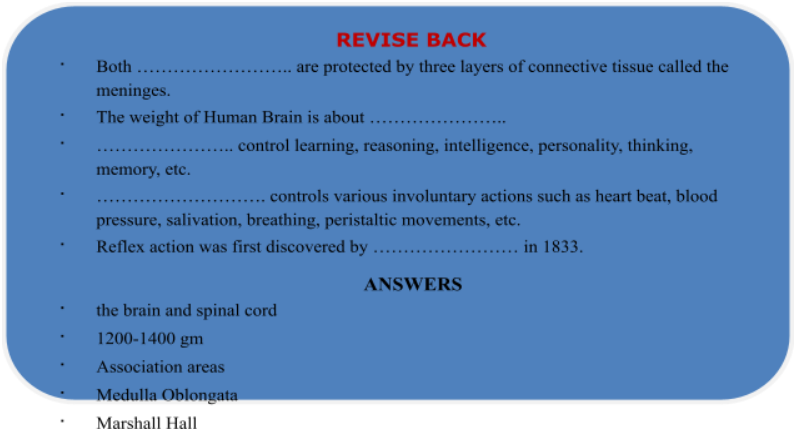