Human Health and Diseases of Class 12

Abnormal uncontrolled cell division in any part or tissue of the body causing its extra growth, is called Neoplasia or tumour.
Neoplasm defined as the abnormally grown mass of cells.
According to their nature and effects tumour are of two types :- (i) Benign (ii) Malignant (cancer).
Oncology — Study of cancer.

Following are the contrasting features of both types:
Benign tumour  Malignant tumour

Other features of cancer cells

Cell division is uncontrolled in any part of the body
Generally detected in metastatic (or 2nd stage) stage.
Loss of contact inhibition, do not follows Hay-flick limit and proper cell cycle phases.
Highly complex in nature, no certain cause can be attributed Occurs primarily due to wrong expression of genes, the oncogenes formed from protooncogenes which is responsible for the normal growth and maintenance of all cells.

Any agent that induces a cancer is called carcinogenic or oncogenic agent. Radiation, sunlight, UV rays cause Xeroderma pigmentosum, the skin cancer.
Virus also cause cancer 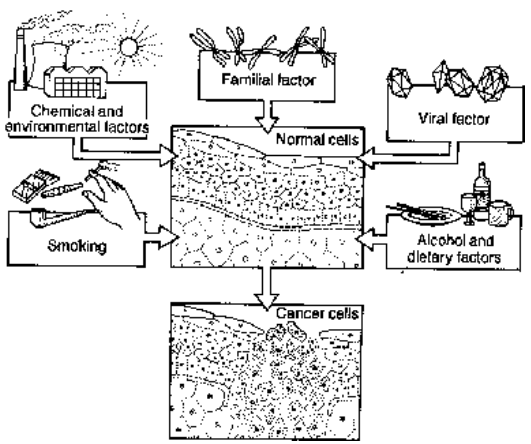 The name is generally coined by adding suffix ‘oma’ to the type of tissue it affects.
Carcinoma - Epithelial tissue (ectodermal and endodermal origin)


Surgery; Radiation therapy; Chemotherapy Gleevec, a new drug approved in May 2001 for the treatment of Leukemia and also effective in the cancer of lung, stomach and prostate.

A plant Catharanthus (or Vinca rosea) also called as Sadabahar is the source for vincristin and vinblastin. Cytochalasin B is anti-cancerous drug.