Reproduction In Flowering Plants of Class 12

It is the development of mature embryo from zygote or oospore. Development of embryo is endoscopic or on inner side due to presence of suspensor.

The zygote divides transversely, producing a vesicular suspensor cell towards micropylar end and embryo cell towards the chalazal end. The embryo cell divides transversely again into a terminal cell and a middle cell. The terminal cell divides vertically and transversely into globular embryo. It forms a massive cotyledon and plumule. Growth of cotyledon pushes the plumule to one side. Remains of second cotyledon occur in some grasses. It is called epiblast. The single cotyledon of monocots is alled scutellum. It is shield shaped and appears terminal. The middle cell gives rise to hypocotyl and radicle. It may add a few cells to the suspensor. Both radicle and plumule develop covering sheaths called coleorhiza and coleoptile respectively. They appear to be extension of scutellum.

Discovered by Leeuwenhoek in case of Citrus. It is the phenomenon of development of more than one embryo in same seed.

Morphologically, ripened ovule is known as seed. Seed can also be defined as a mature integumented megasporangium.It is a unit containing an embryo plant in which the primordia of future structures are already established and embedded in nutrient and protective tissue derived from previous generation.

Seed Coat : It is protective covering of the seed and is made up of two layers : (a) outer, called Testa, Which is usually hard, and (b) inner, called Tegmen, which is thin and papery. There is a small opening at one end of the seed coat called micropyle through which water enters. There is a depression like concavity at middle of one edge, where the seed breaks from the stalk of funiculus; this is called hilum. There is a ridge beyond the hilum opposite the micropyle. It represents the base of the funiculus which is fused with the integuments and is called raphe.

Embryo : Embryo is a young plant enclosed in a seed coat. It has two parts :

Endosperm : It is food-laden tissue, either present on one side of embryo or surrounding the embryo on all sides. In some seeds, the endosperm is present until maturity. Such seeds are called endospermic (albuminous) seeds. In some seeds it is consumed in young stages by the delveloping cotyledons and such seeds do not have endosperm at maturity. Such seeds are called non endospermic (ex-albuminous) seeds. All parts enclosed by seed coat are called kernel.

Pea seed (Pissum sativum) : Pea seeds are round. Each is attached to the placental tissue of the fruit by a stalk called funicle. The point of attachment of funicle to seed is called hilum. Near the hilum is an opening of the size of a pinhole, called micropyle. The seed is covered by seed coat which outer layer is called testa and the inner thin and delicate layer is called tegmen. Enclosed by the seed coat is present the kernel. The kernel enclose two thick cotyledons with stored food. The two cotyledons are hinged to an axis (tigellum) so that they open like a book. One end of the cotyledons lies next to the micropyle. It is radicle or rudimentary root. The protuding radicle lies under the pouch-like expansion of seed coat. The other end of the tigellum is the feathery plumule which develops into shoot. The plumule lies enclosed by two cotyledons The portion of the tigellum just below the cotyledonary node (between radicle and node) is called hypocotyl and the portion just above (between plumule and node) is called epicotyl. e.g.Gram (Cicer arietinum) Bean (Hindi – sem) (Dolichos lablab). Tamarind (Tamarindus indica) Cucurbits gourd, Cucumber, etc., are almost similar in organization.

Albuminous Seeds : In these seeds food is not stored in two cotyledons, but in endosperm which is present even in mature seed and the cotyledons are thin only as food sucking organs., e.g., Castor (Ricinus communis), Papaya (Carica papaya), Cotton. These seeds are common among the monocots.

Castor Seed : The seed coat is hard shell of mottled black or brown colour. The hilum almost hidden by an outgrowth, the caruncle. Caruncle is a proliferation of tip of outer integument. It is spongy and absorbs water readily. There is a distinct raphe running longitudinally down the seed from hilum. Inside the hard seed coat, there is a white papery membrane which is a remnant of the nucellus and is called perisperm. Inside the perisperm is present a fleshy, slightly flattened, oily, oval mass of tissue, the endosperm. The endosperm encloses the embryo. The embryonic axis is called tigellum, to the central part of which are attached two thin papery cotyledons. One end of the tigellum called plumule is enclosed by two cotyledons and another end called radicle protrudes out of the cotyledons. 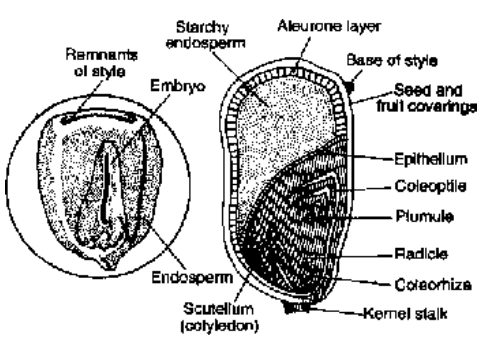