Given: A triangle ABC in which a line parallel to side BC intersects other two sides AB and AC at D and E respectively.

(Taking AD as base) 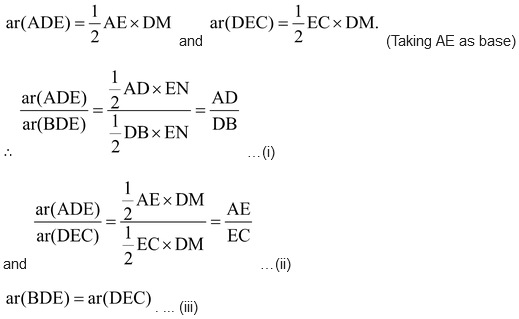 [Δ BDE and DEC are on the same base DE and between the same parallels BC and DE.]

Corollary: From above equation we have

Adding '1' to both sides we have

(Converse of BPT theorem) If a line divides any two sides of a triangle in the same ratio, prove that it is parallel to the third side.

Given: In ΔABC, DE is a straight line such that

Construction: If DE is not parallel to BC, draw DF meeting AC at F. 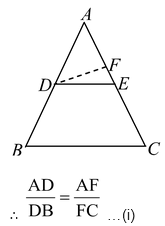 [∴ A line drawn parallel to one side of a Δ divides the other two sides in the same ratio.] 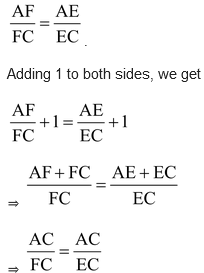 It is possible only when E and F coincide

SOME IMPORTANT RESULTS AND THEOREMS:

(i) The internal bisector of an angle of a triangle divides the opposite side internally in the ratio of the sides containing the angle.

(ii) In a triangle ABC, if D is a point on BC such that D divides BC in the ratio AB : AC, then AD is the bisector of ∠A.

(iii) The external bisector of an angle of a triangle divides the opposite sides externally in the ratio of the sides containing the angle.

(iv) The line drawn from the mid-point of one side of a triangle parallel to another side bisects the third side.

(v) The line joining the mid-points of two sides of a triangle is parallel to the third side.

(vi) The diagonals of a trapezium divide each other proportionally.

(vii) If the diagonals of a quadrilateral divide each other proportionally, then it is a trapezium.

(ix) If three or more parallel lines are intersected by two transversal, then the intercepts made by them on the transversal are proportional.

If any students need to take the online test to check their concepts or undertstanding then they can visit Question for Basic Proportionality Theorm.

Solution: In ΔABC, we have 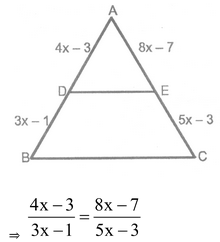 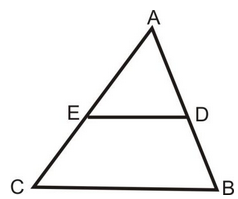 Thus, DE divides sides AB and AC of ΔABC in the same ratio. Therefore, by the converse of basic proportionality theorem we have DE||BC.

Question 3. In a trapezium ABCD AB||DC and DC = 2AB. EF drawn parallel to AB cuts AD in F and BC in E such that 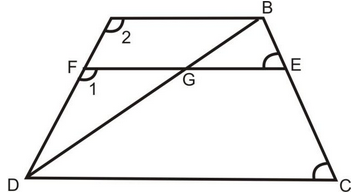 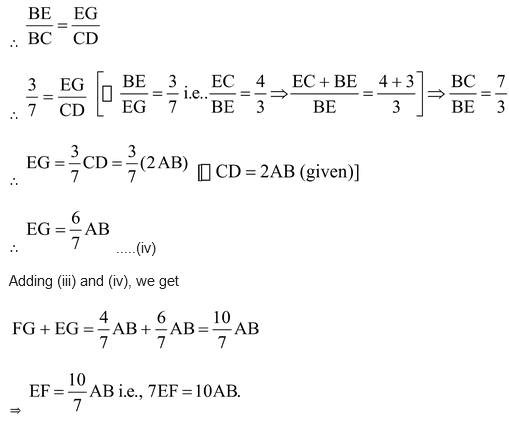 Question 4. In ΔABC, if AD is the bisector of ∠A, prove that 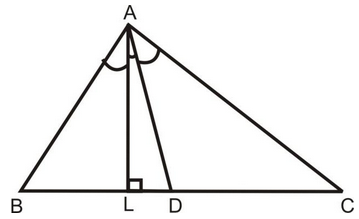 Solution: In ΔABC, AD is the bisector of ∠A.

Solution: It is given that AD is the bisector of ∠A of ΔABC. 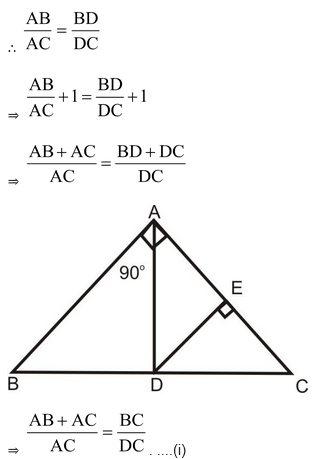 In Δ’s CDE and CBA, we have

So by AA-criterion of similarity 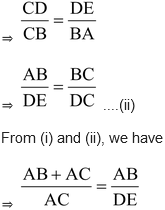 Question 6. In the given figure, PA, QB and RC are each perpendicular to AC. Prove that 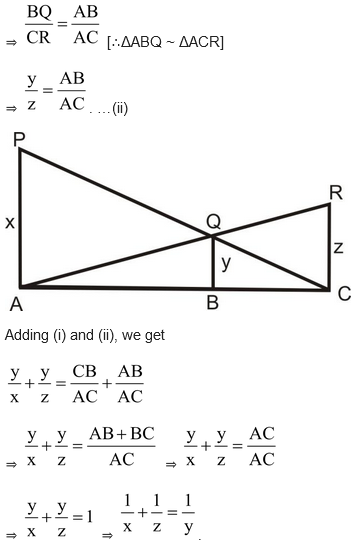 Question 7. In the given figure, AB||CD. Find the value of x.

Solution: Since the diagonals of a trapezium divide each other proportionally. 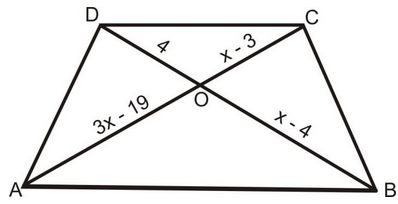 CRITERIA FOR SIMILARITY OF TWO TRIANGLES

Thus, two triangles ABC and A'B'C' are similar if

In this section, we shall make use of the theorems discussed in earlier sections to derive some criteria for similar triangles which in turn will imply that either of the above two conditions can be used to define the similarity of two triangles.