Plant tissues are of two types

This differentiation is based on the ability of the mature cells of the tissue to divide and produce new cells. Meristematic tissue cells are capable of dividing, while permanent tissue cells are not.

Meristematic tiss ue, commonly called meristem (Gk. meristos: divisible) is composed of cells which possess the power of cell division. The term ‘meristem’ was introduced by C. Nageli (1858) for a group of continuously dividing cells.

Cytoplasm is dense, granular with a central, large and prominent nucleus.

Vacuoles are either very small or absent. The cells of cambium are, however, vacuolated.

Metabolic activity is high, so is the rate of respiration.

Cytoplasm has all the cell organelles, but instead of plastids there are proplastids.

Ribosomes are abundant, ER is simple.

Meristems have been classified on the basis of origin, position, function and plane of cell division.

Meristems based on position

The Meristem situated at the growing tips of root, shoot and their branches is called Apical meristem.

The meristem situated on the sides of the axis of plants is called lateral meristem and is responsible for secondary growth.

The meristem present at the nodal region of stem and its branches and intercalated between permanent cells is called intercalary meristem.

It may be present either at the base of internodes (e.g., grasses, bamboo, wheat) or nodes (e.g., mint) or leaves (e.g., Pinus)

It is responsible for the elongation of internodes, increase in length and formation of lateral appendages.

It is short lived and very soon becomes permanent.

Differences between apical and lateral meristems :

Fig. : Different types of meristem on the basis of position in plant body

In vascular plants the meristem which first appears in the embryonic shoot or embryonic root is known as apical meristem. All primary tissues of the plant body originate from the shoot and root apical meristem.

It is the terminal meristem of the shoot. It continuously gives rise to new cells and tissues from which new organs are formed.

The root apical meristem is relatively simple than the shoot apex. It is sub-terminal in position because root cap is present at the apex.

It is not associated with the formation of lateral appendages and differentiation of nodes and internodes.

Root apex does not show any distinction of tunica and corpus. It has central group of permanent initials, promeristems, produces 3−4 bands of temporary initials, called histogens. 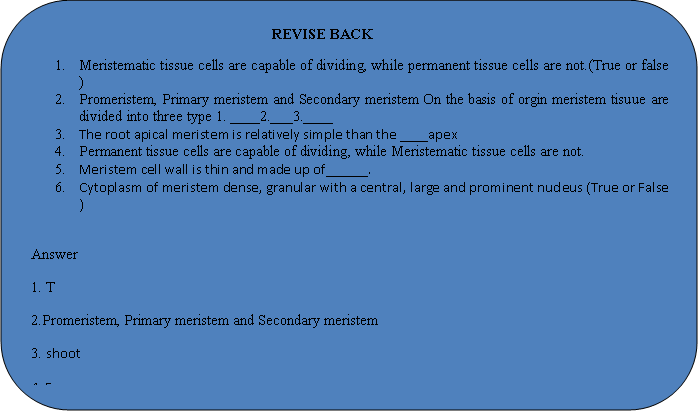