STRUCTURE AND WORKING OF HUMAN EYE

The human eye is one of the most sensitive sense organs of sight which enables us to see the wonderful world of light and colour around us. It is like a camera having a lens system and forming an inverted, real image on a light sensitive screen inside the eye. The structure and working of the eye is as follows :

Structure and Working of Human Eye

The eye is essentially a closed sphere into which light passes through a lens and strikes a light sensitive surface. A simplified anatomy of the eye is shown in the diagram below. 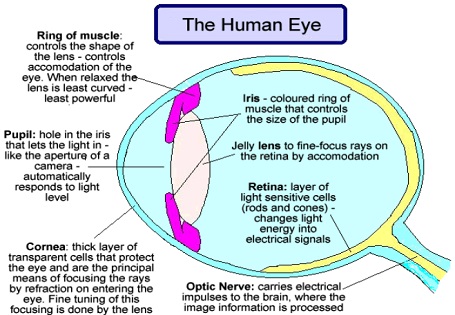 NCERT solutions for class 8 Science prepared by pw will help you to solve your NCERT text book exercise.

You should also know that the Retina is the coating of the interior surface at the back of the eye. It consists of an array of light-sensitive receptors called rods and cones which convert the light energy into electrical signals. It plays the role of the film in a camera. Rods are sensitive to dim light and do not respond to colour. They allow us to see in dim light conditions. Cones are sensitive to bright light and colour (blue, red and green).

The images of the objects at different distances from the eye are brought to focus on the retina by changing the focal length of the eye-lens, which is composed of fibrous jelly-like material, can be modified to some extent by the ciliary muscles.

NEAR POINT AND FAR POINT:

The nearest point at which a small object can be seen distinctly by the eye is called the near point. For a normal eye, it is about 25 cm and is denoted by the symbol D.

With advancing age, the power of accommodation of the eye decreases as the eye lens gradually loses its flexibility. For most of the old persons aged nearly 60 years, the near point is about 200 cm and corrective glasses are needed to see the nearby objects clearly.

The farthest point upto which our eye can see objects clearly, without any strain on the eye is called the far point. For a person with normal vision, the far point is at infinity. You can refer NCERT solutions for class 8 science for this chapter for more detail.

Function of Iris and Pupil 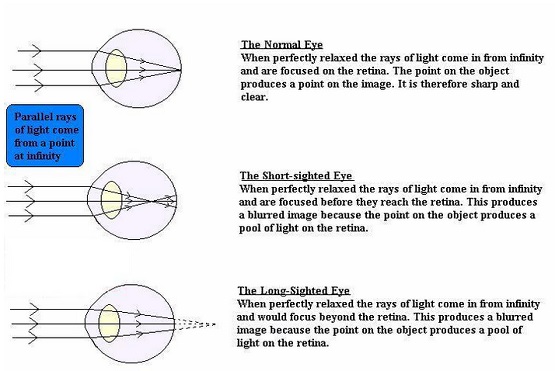 N.B.: Refraction is only shown at the air/cornea boundary 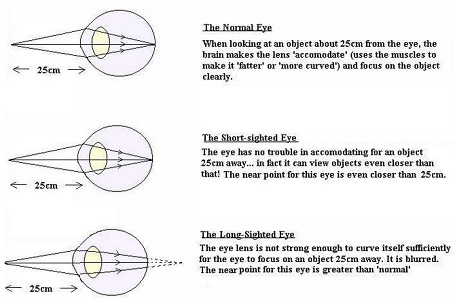 N.B.: Refraction is only shown at the air/cornea boundary

Q1. Give some sensory organs.

Ans. Some sensory organs of the human body are the eyes, ears, nose, tongue, and skin.

Q2. What are the parts of the human eye?

Ans. Parts of the human eye are:

Ans. The junction of the retina and optic nerve where no sensory nerve cells are found is known as a blind spot. No vision is possible in the blind spot.

Ans. A lens is a transparent structure found behind the pupil.

Q5. What are the types of optic nerves?