Chromosomal Basis of Inheritance of Class 12

The salient features of Chromosomal theory (Sutton and Boveri) of inheritance are as follows:

Every chromosome or chromosome pair has a definite role in the development of an individual. Loss of a complete or part of the chromosome produces structural and functional deficiency in the organism. Like the hereditary traits the chromosomes retain their number, structure and individuality throughout the life of an organism and from generation to generation. Both chromosomes as well as genes occur in pairs in the somatic or diploid cells. A gamete contains only one chromosomes of a type and only one of the two alleles of a trait. The paired condition of both chromosomes as well as Mendelian factors is restored during fertilization. Genetic homogeneity and heterogeneity, dominance and recessiveness can be suggested by chromosomal type and behaviour. Homologous chromosomes synapse during meiosis and then separate or segregate independently into different cells which establishes the quantitative basis for segregation and independent assortment of hereditary factors.

Chromosomes (G.K. Chroma - Colour, Soma - body, because of deep staining with certain dyes) are oval, rod or thread like DNA complexes which function as hereditary vehicles.Chromosomes store, replicate and transcribe coded hereditary information (i.e. hereditary vehicles) They were first seen by Hofmeister (1848) as nuclear filaments in pollen mother cells of Tradescantia .Present name was given by Waldeyer (1888)

In Prokaryotes hereditary material is not associated with proteins. Histones are absent i.e. naked Genetic material contained in a prokaryotic cells is equal to a single chromosome of eukaryotes. It is called nucleoid, genophore, prochromosome or chromonema.

It consists of a single double stranded circular molecule of DNA. In Escherichia coli about 1.2 mm long DNA molecule is accommodated in a space of 1-2 µm. DNA duplex is covalently closed circular structure having several loops each of which is super coiled. Coils are stabilised by RNA and polyamines. Histones are absent but other basic proteins or polyamines are present. Degree of folding is 250-700 times.

A number of genes have been mapped in certain bacteria e.g., 2500 genes in E.coli. The bacterial chromosome attached to mesosome by two closely placed replicating forks.

Plasmids which can get temporarily integrated to genophore and replicate with it are called Episomes. Integration with chromosomal DNA is possible if the plasmid carries some DNA portion similar to chromosomal DNA. The same is called Chromosomal Memory.

These factors are becoming important tools for genetic engineering.

In eukaryotes, DNA occurs inside both in nucleus and semi-autonomous organelles (viz. mitochondria, plastids). Eukaryotic chromosomes are DNA-histone complexes. The best time to observe and count the number of chromosomes of a cell is late prophase and metaphase.

These are two chromosomes of the same type, size, morphology and arrangement of gene loci.

These are those chromosomes which singly or in pair determine the sex of the individual in dioecious or unisexual organisms. They are called allosomes or idiochromosomes. A sex chromosome that determines male sex is termed androsome, e.g., Y-chromosome in humans. The normal chromosomes, other than the sex chromosomes if present, of an individual are known as autosomes. 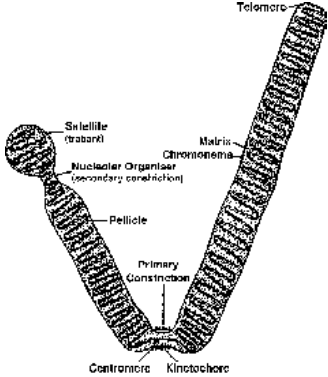 Fig. Structure and parts of chromosome (sat) at anaphase 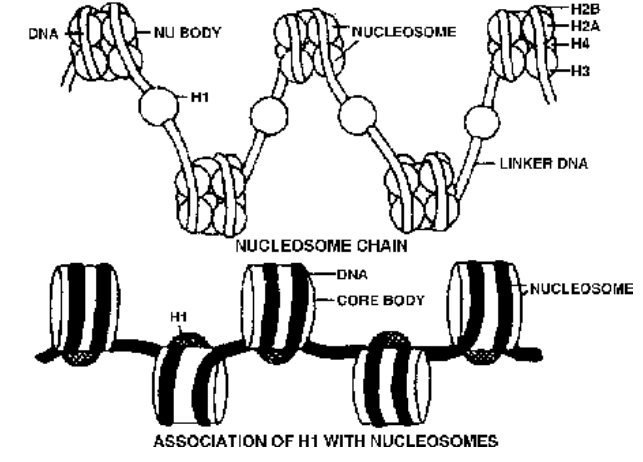 H1, H2A, H2B, H3 and H4. Four of them (H2A, H2B, H3 and H4) occur in pairs to produce histone octomer, nu body or core of nucleosome. They are one of the most conserved proteins, being similar in different species. Their charged ends (+vely) are towards outside. DNA is wrapped over the nu body almost twice to form nucleosome with a diameter of about 100 Å (10 nm). DNA connecting the two adjacent nucleosomes is called interbead or linker DNA. It bears H1. H1 is not conserved but is quite specific for different tissues. Length of linker DNA is also varied.

Secondary constrictions are of two types.

Giant Chromosomes Polytene Chromosomes (Kollar, 1882) Polytene chromosomes were first reported by E.G. Balbiani in 1881. They are quite common in salivary glands of insects and are, therefore, popularly called salivary chromosomes.

Lampbrush Chromosomes : The lampbrush chromosomes are highly elongated special kind of synapsed mid-prophase or diplotene chromosome bivalents which have already undergone crossing over. 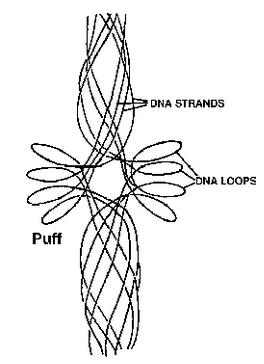 It is of three types

Stevens (1902) discovered Y-chromosome. Mc Clung (1902) observed that in Squash Bug (Anas), male has 21 chromosomes while female has 22 chromosomes. He stressed that X-chromosome has a role in sex determination.

Wilson and Stevens (1905) put forward the chromosome theory of sex with X and Y chromosomes being named as sex chromosomes.

Correns (1906) put forward the theory of heterogamesis. According to this theory one of the two sexes has different types (heteromorphic) of sex chromosomes. It produces two different types of gametes. The other sex has homomorphic sex chromosomes. It produces one type of gametes or homogametes. Sex of the offspring is determined by the type of heterogamete fusing with the homogamete.

It occurs in mammals and many insects with females having homomorphic XX sex chromosomes and males possessing heteromorphic XY-chromosomes. Y is shorter, may be hooked (as in Drosophila).

Genes present of differential region of X-chromosome also find expression in males (sex-linked traits) whether they are recessive or dominant because males are hemizygous for these genes, e.g., red-green colour blindness, haemophilia. Male is heterogametic (A + Y, A + X, in human beings 22 + Y and 22 + X) while female is homogametic (A + X, in human beings 22 + X). The two types of male gametes or sperms are called androsperms (22 + Y) and gynosperms (22 + X). XY sex determination is found in many bryophytes (females A + X, males A + Y) and angiosperms Melandrium (Lychnis), Coccinia, Salix, Elodea, etc. Sex is decided at the time of fertilization. It is known as syngametic sex determination.

In roundworms and certain insects (true bugs, grasshoppers, cock-roaches), the females have two sex chromosomes, XX while the males possess a single sex chromosome, X. The females are homogametic (A + X). The males are heterogametic producing androsperms (A + Zero) and gynosperms (A + X). Amongst angiosperms, Dioscorea sinuata has XX-XO sex complement.

Haplodiploidy (Honey Bee Method) It is chromosomal sex determination in which one sex is haploid while the other is diploid. Queen Bee picks up all the sperms from a drone during nuptial flight and stores the same in its seminal vesicle. It does not fertilise the eggs which are to develop into drones or males. The phenomenon is called arrhenotoky or arrhenotokous parthenogenesis. Sex determination is progamic in drones and epigamic in females. Drones produce sperms directly without meiosis while queen develops haploid eggs through oogenesis (meiosis). Haplodiploidy also occurs in wasps and ants.

It was propounded by Bridges (1926) and is based on his work on Drosophila. According to genic balance theory of Bridges, sex is determined by the balance or ratio between number of X-chromosomes and autosome genomes. Accordingly (XXY + 2A) genotype in Drosophilia produces female phenotype.This is the main proof genic balance theory. 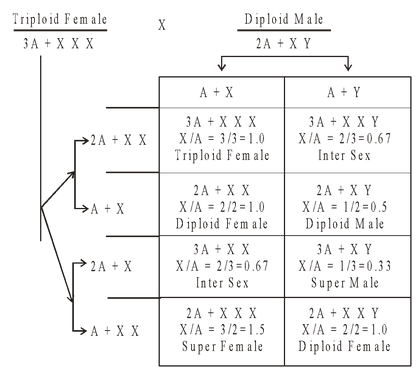 Table : Genic balance concept of sex determination in Drosophila as proposed by Bridges

Chromosomes are stained with special fluorescent dyes that have differential affinity for different parts of the chromosomes. It brings about specific banding pattern. Bands are segments of stand chromosomes that appear lighter, darker or stained as compared to adjacent parts. There are many types of staining techniques which show different banding patterns.

Morgan and Bridges were the first to experimentally prove that genes are located on the chromosome. The evidence came from two sets of experiments performed independently by them. Morgan searched thousands of Drosophila flies and found a white eyed male fly instead of the normal red colour.

He made three types of crosses. 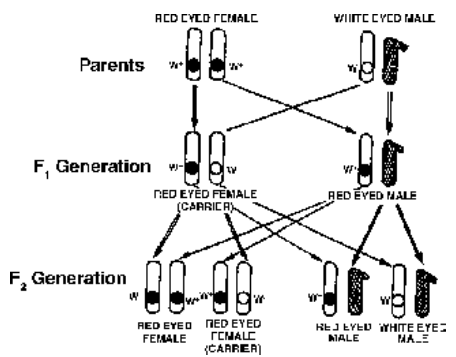 Fig. Cross 2 of Morgan or test cross in Drosophila where red and white eyed traits appear in both males and females in equal proportions 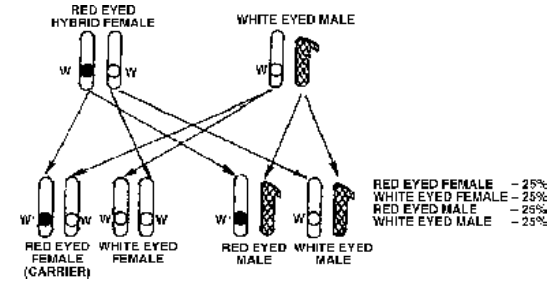 Taking all the crosses into consideration Morgan came to the conclusion that eye colour gene is linked to sex and is present on the X-chromosome.

Bridges (1916) was the first to find out nondisjunction in XX chromosomes in Drosophilia.