The unit of charge, in S.I. system is coulomb, which is equivalent to the charge of nearly 6.25 × 1018 electrons. If charge is measured in coulomb, then the flow of 1 coulomb/second gives us the unit of current, which is called Ampere named in the honour French scientist, Andre - Marie Ampere (1775 – 1836).

SI unit of current is Ampere (A)

Therefore, 1 ampere of current is said to be flowing through the conductor if one coulomb of charge flows through it in one second. 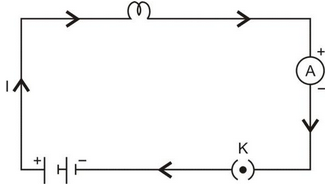 HOW THE CURRENT FLOWS IN A WIRE : 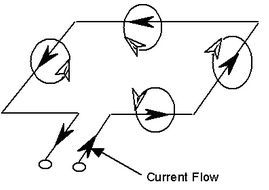 When a source of electricity like a cell or a battery is connected between the ends of the metal wire, then an electric force acts on the electrons present in the wire. Since the electrons are negatively charged, they start moving from negative end to the positive end of the wire and this flow of electrons constitutes the electric current in the wire.

HOW TO GET A CONTINUOUS FLOW OF ELECTRIC CURRENT: