Relative Strength Of Acids And Bases

Relative Strength Of Acids And Bases

(i) Predict the relative acidic strength among the following

1. Volume available for the charge is increasing from left to right.

3. Basic character of the ions is decreasing from left  to right.

4. Acidic character of the conjugate acids is increasing from left to right.

(ii)  Predict the relative acidic strength among the following :

It can be easily seen that the volume available for the negative charge is increasing from HO− to HTe−, therefore the following conclusion can be derived:

1. Volume available for the negative charge is increasing from left to right.

3. Basic character is decreasing from left to right.

4. Acidic character of conjugate acids is increasing from left to right i.e.

(iii) Predict the relative acidic strength among the following:

We shall qualitatively analyse the charge density in each of the species and we shall follow the rule given below:

1. Larger the volume over which the charge is spread.

2. Smaller is the charge density.

3. Smaller is the basic character of the ion to attract a proton.

4. Larger is the acidic character of the conjugate acid.

1. Volume available for the negative charge is increasing in the conjugate bases from left to right.

2. Charge density of the conjugate bases is decreasing from left to right.

3. Basic character of the conjugate bases is decreasing from left to right.

4. Acidic character of the acids is increasing from  left to right.

(iv) Predict  the relative acidic strength among the following :

The species that have more than one oxygen atoms show resonance.

It can be clearly seen that more the number of oxygen atoms, more the resonance and more is the volume available for the  negative charge. Therefore the following conclusion can be derived:

1. Volume available for the negative charge is increasing from left to right.

3. Basic character of the anion is decreasing from left to right.

4. Acidic character of the conjugate acid is increasing from left to right.

(v) In general, for oxo-acids with different central atoms of same oxidation states, acidic character  increases with the decrease in size of the central atom.

This is because, smaller the size of the central atom of an oxo- acid of the type HOY, larger is the electronegativity of Y, more is the pull of the electrons of O-Y bond towards  Y. This would result in a more positive character on O which would consequently help the H−O electrons to be pulled by O and release H as H+.

For oxo-acids having the same central atom at different oxidation states, the rule to be followed is :

The factors responsible for influencing the acidity of an organic compound, H−X are

(b) The electronegativity of X

(d) The nature of the solvent.

The most important factors among all is (c). Now let us see using any of these factors, how we predict the order of acidic strength for organic acids.

If we were to predict the order of acidic strength of ethanol, isopropanol and tertiary butanol, we can proceed as

As alkyl groups (methyl group) have a +I effect, the electron density at the oxygen atom will increase. More the number of alkyl groups, more will be the intensity of negative charge on oxygen. The greater the negative charge on the oxygen atom, the closer is the electron pair in the O−H bond driven to the hydrogen atom and consequently separation of a proton becomes increasingly difficult. Thus, the acidic strength of given alcohols will be in the order

(iii) Phenols and substituted phenols: Phenols are stronger acid than alcohols. This is attributed to the fact that in phenoxide (anion obtained by the loss of proton from phenol), there is possibility of the delocalization of its negative charge through interaction with the π−orbitals of the aromatic nucleus while alkoxide cannot be stabilized by such effect. Thus phenoxide is a weaker base than alkoxide. Consequently, the phenol would be stronger acid than alcohol.

Delocalization also occurs in the undissociated phenol but as it involves charge separation, it is less effective than in the phenoxide. Thus, phenoxide shows some reluctance to take up proton and the equilibrium lies to the right, indicating greater stabilization of phenoxide and more acidity of phenols with respect to alcohols.

Now, let us compare the acidic strength of o−, m− and p− nitrophenols. The corresponding phenoxide ions obtained from the three nitrophenols would be stabilized by delocalization as 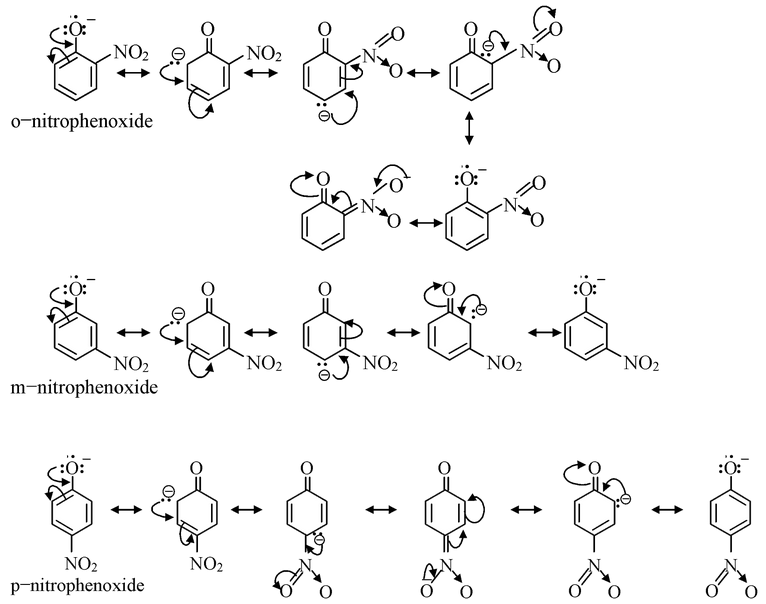 The order of acidic strength of the nitrophenols is

The presence of electron−with drawing substituents in simple aliphatic acids increases their acidity while the electron−releasing substituents have reverse effect. For instance, let us compare the acidic strength of fluoroacetic acid and acetic acid.

As we know that unsaturated α−carbon atom in propionate ion is sp2 hybridised, which means that electrons are drawn closer to the carbon nucleus than in a saturated, sp3 hybridised α−carbon atom, due to greater s−contribution in the sp2 hybrid orbital. The result is that sp2 hybridised carbon atoms are less electron−donating than saturated sp3 hybridised ones. thus, propanoate ion will be comparatively less stabilized than prepenoate ion, thereby making propenoic acid stronger than propanoic acid (but propenoic will still be weaker than methanoic acid). 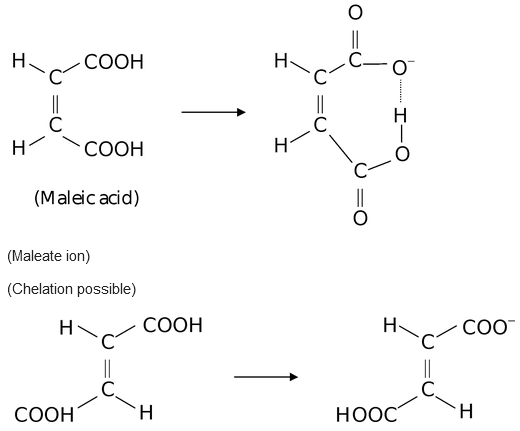 Now let us consider substituted benzoic acids. At this point, we will consider the effect of substituents from m− and p−position only. First let us take methyl substituted benzoic acids. As the methyl group has +I effect, so the net result will be to increase the +R effect in the m− or p−tolyl group. Since, the inductive effect decreases with distance, so the +I effect of CH3 from para position would be less than the +I effect of CH3 group from meta position. Thus, the electron−density in the O−H bond of m−methyl benzoic acid would be greater than that in p−methyl benzoic acid. Accordingly, the p− isomer should be more acidic than the m−isomer. But in real practise, the order is reverse. Actually, we have ignored the hyperconjugation effect of CH3 group. Due to hyperconjugation effect of CH3 in p−isomer, the electron density in the O−H bond would be increased greatly with respect to that in m−isomer. 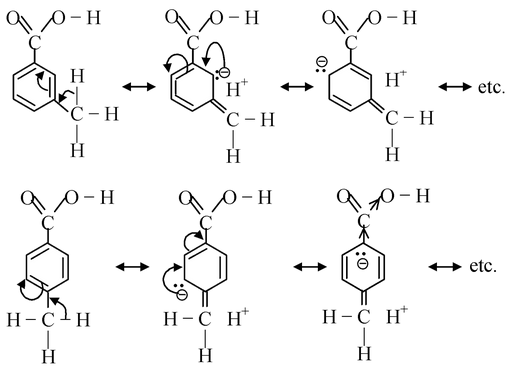 Secondly, let us take nitro substituted benzoic acids. As the −NO2 group exerts −I and −R effect (both reinforming each other), the electron−density from the O−H bond would be withdrawn, thus destabilizing the O−H bond and making m− and p− nitro benzoic acids stronger than benzoic acid. 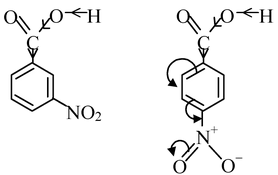 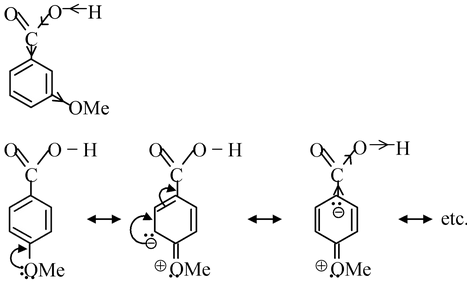 There is a special effect shown by o−substituents called ortho−effect. It has been observed that irrespective of the nature of the group present at ortho position in benzoic acid, nearly all o−substituted benzoic acids are stronger than benzoic acid. As we have seen benzoic acid is a resonance hybrid and so the carboxyl group is coplanar with the ring. Introduction of any o−substituent tends to prevent this coplanarity. Thus, resonance is diminished (or prevented) and so the oxygen atom of the OH group has a greater positive charge, resulting in increased acid strength. Thus, it follows that greater the steric inhibition of resonance, the stronger is the acid.

As increasing strength in nitrogenous bases is related to the readiness with which they take up protons and which inturn depends on the availability of the unshared electron pair on nitrogen, we expect an increase in basic strength on going from NH3 → RNH2 → R2NH → R3N, due to the increasing inductive effect of successive alkyl groups making the nitrogen atom more electron rich.

Thus on going along the series, NH3 → RNH2 → R2NH → R3N, the inductive effect will tend to increase the basicity but progressively less stabilization of the cation by hydration will tend to decrease the basicity. The net effect of introducing successive alkyl groups thus becomes progressively smaller, and an actual changeover takes place on going from a secondary to a tertiary amine. If this is assumed to be the right explanation, no such changeover should be observed if measurements of basicity are made in a solvent in which hydrogen−bonding cannot take place. This is indeed found to be true. In chlorobenzene, the order of basicity of the butylamines is BuNH2 < Bu2NH < Bu3N while their basic strength in water follows the order Bu3N  < BuNH2  < Bu2NH.

Tetraalkylammonium salts, e.g. R4N⊕ I−on treatment with moist silver oxide (AgOH) to yield basic solutions comparable in strength with the mineral alkalis. This is readily understandable as R4N⊕ −OH formed is completely ionized to give R4N+ and free OH−.

The amides are also found to be only very weakly basic in water [pKa for ethanamide(acetamide) is ≈ 0.5], because of the −I and −R effect of RCO group which makes the electron pair very slightly available on nitrogen atom.

If two C = O groups are present the resultant imides often become sufficiently acidic to form alkali metal salts. For example, benzene−1,2−dicarboximide is not basic but is acidic in nature because of the presence of two electron-withdrawing CO groups.

Aniline is a weaker base than ammonia or cyclohexylamine. It is because of the fact that the electron pair on nitrogen is involved in delocalization, making it less available for donation.

If aniline accepts a proton, the anilinium cation formed cannot be stabilized by delocalization as the electron pair on nitrogen is no longer available. Thus, it is 'energitically unprofitable' for aniline to take up a proton. Thus it functions as a base with utmost reluctance.

and triphenylamine (Ph3N) is not basic at all by ordinary standards.

Introduction of alkyl group (like Me) on the nitrogen atom of aniline results in small increase in the basic strength.

Unlike such introduction in aliphatic amines, this small increase in basic strength is progressive, indicating that cation stabilization through hydrogen−bonded solvation, here has less influence on the overall effect.

Let us compare the basic strengths of o−, m− and p−nitroanilines. The electron withdrawing NO2 group exerts its −R effect from o− and p−positions while its −I effect from all positions.

Since, the electron pair on nitrogen in o−  and p−nitroanilines is delocalized extensively by −I and −R effect combindly, so they are less basic than m−nitroaniline in which only −I effect operates. Out of o− and p−isomers, ortho is less basic than para because −I effect of NO2 from ortho position is stronger than from para position. Thus the basic strength of nitro anilines follow the order

Now if we take o−, m− and p−methoxy anilines. The OMe group exerts −I and +R effects (only from ortho and para position).

As OMe group exerts +R from ortho and para position, so o− and p−methoxy anilines are stronger base than m−methoxy aniline, in which OMe exerts only −I effect. 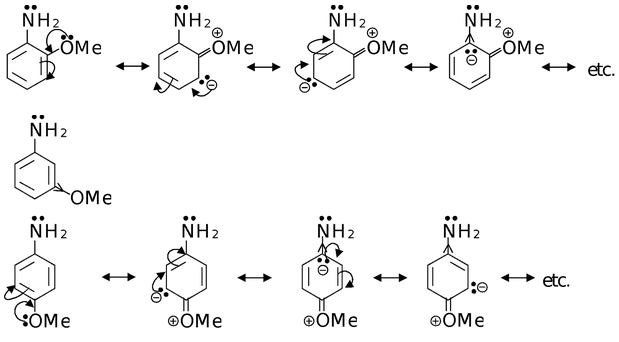 −I effect of OMe from ortho position is stronger than from para position, thus decreasing the electron density on nitrogen in o−methoxy anilne than in p−methoxyaniline. Thus, the order of basic strength would be