The similarities and differences between mass and weight are discussed as follows :

The mass of a body is the quantity of matter contained in it.

Mass is a scalar quantity. The unit of mass is kilogram.

A body contains the same quantity of matter whether it be on the earth, moon or even in outer space. Thus, the mass of a body is constant and does not change from place to place.

Mass of a body is usually denoted by the small letter ‘m’.

Mass of a body is a measure of inertia of the body and hence it is also known as inertial mass. The mass of a body cannot be zero.

We know that the earth attracts every object with a certain force and this force depends on the mass (m) of the object and the acceleration due to gravity (g).

The weight of an object is the force with which it is attracted towards the earth.

The force of attraction of the earth on an object is known as the weight of the object. It is denoted by W.

As the weight of an object is the force with which it is attracted towards the earth, the S.I. unit of weight is the same as that of force i.e. Newton (N).

The weight is a force acting vertically downwards; it has both magnitude and direction, so it is a vector quantity.

The mass of an object remains the same everywhere, that is, on the earth or on any planet whereas its weight depends on its location.

Difference Between Mass and Weight:

Weight of a Freely Falling Body 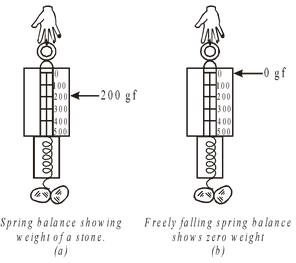 If a stone be suspended from the hook of the spring balance. Note its reading. Suppose it can be 200 g f. Release the spring balance along with hanging stone. Record the reading quickly as the stone is falling down. We shall find that the spring balance will show zero reading. Thus, stone under the condition of free fall experience weightlessness.

Astronaut in a space ship orbiting the earth more than 1000 km above its surface. At that distance from the earth, the force of gravity of earth is still quite strong. Since the acceleration due to gravity is not zero, the weight of astronaut in the space ship certainly cannot be zero.

But we all have seen them on photographs and T.V.,they float in space ship and believe that in this situation they are weightless. This can be explained as follows:

When an astronaut in the space ship is orbiting the earth, then both, the astronaut and the spaceship are in a continuing state of free fall towards the earth with the same acceleration due to gravity.

Since the downward acceleration of the astronaut is the same as that of the spaceship he does not exert any force on the sides of the space ship and a weighing machine kept in the space vehicle will show his weight to be zero.

Though the free fall of a body produces a feeling of weightlessness but a true weightlessness can be experienced by a spaceship in a region of outer space where the acceleration due to gravity ‘g’ is zero.

Weight of an object on the moon:

By applying the universal law of gravitation, the weight of the object on the moon will be

If the weight of the same object on the earth be We. The mass of the earth is M and its radius is R.

Dividing equation (i) by (ii), we get 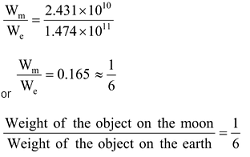 It is an artificial satellite revolving around the earth with the following condition. 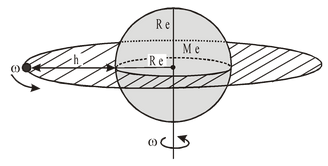 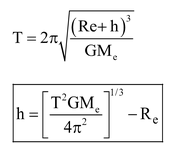 Fluid is a substance that flows under the action of an applied force and does not have a shape of its own. For example, liquids and gases. They take the shape of container in which they are stored.

PRESSURE IN A FLUID:

In case of solids, the force can be applied in any direction with respect to the surface, but in liquids, the force must be applied at right angles to the liquids surface. This is because fluids (liquids and gases) at rest cannot sustain a tangential force. Therefore, we state the pressure acting on the fluid instead of force.

The pressure (P) is defined at the magnitude of the normal force acting on a unit surface area of the fluid. It a constant force of magnitude F acts normally on a surface area A, then pressure acting on the surface is given by P = F/A.

The pressure is a scalar quantity. This is because hydrostatic pressure is transmitted equally in all directions when force is applied, which shows that a definite direction is not associated with pressure.

The total force exerted by a liquid on any surface in contact with it is called thrust of the liquid.

Another unit of pressure is atmosphere (atm).

1 atm. or one atmosphere is the pressure exerted by our atmosphere on earth surface due to the weight of atmosphere.

Pressure is a Scalar Quantity:

Scalar quantities are those which do not have any direction. The physical quantities which have both magnitude and direction are called vector quantities.

Pressure is a scalar quantity because at one level inside the liquid, the pressure is exerted equally in all direction, which shows that a direction is not associated with hydrostatics pressure or pressure due to a static fluid.

Pressure Exerted by a Liquid Column:

Consider a liquid of density ρ contained in a cylindrical vessel of cross sectional area a. Let h be the height of liquid column and g be the acceleration due to gravity. The weight of liquid will exert a downward thrust on the bottom surface of the vessel. Therefore, pressure due to liquid acts on that surface. 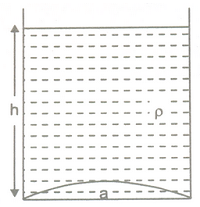 Liquid pressure on the base of vessel is

To understand the term buoyancy, let us perform an activity :

Take an empty plastic bottle. Close the mouth of the bottle with an air tight stopper. Put it in a bucket filled with water.

The weight of an object is the force due to gravitational attraction of the earth. When the bottle is immersed, the upward force exerted by the water on the bottle is greater than its weight therefore it rises up, when released.

To keep the bottle completely immersed the upward force on the bottle due to water must be balanced. This can be achieved by an externally applied force acting downwards. This force must at least be equal to the difference of upward force and the weight of the bottle.

Factors on which up thrust or buoyant force depends:

(i) Take two wooden blocks of different  sizes. Push the small block inside the water in a tub and release it. You will find that the wooden block rises up and come to the surface of water. It rises up because upthrust or buoyant force acting on it is more than its weight.

(ii) Now add some salt in water so that the density of solution (water + salt) increases. Push a wooden block inside the solution and release it. You will find that the block rises up faster in a solution than in pure water. It means, the upthrust or buoyant force acting on a body is more in a liquid having more density than in a liquid having less density.

From the above mentioned actives, we conclude that upthrust or buoyant force depends on :

The tendency of an object to float in a liquid or the power of liquid to make an object float is called  buoyancy.

Archimedes was a Greek scientist. He discovered the principle, subsequently named after him, after noticing that the water in a bath tub overflowed when he stepped into it. He ran through the streets shouting “Eureka”! which means “I have got it”.

This knowledge helped him to determine the purity of the gold in the crown made for the king. This work in the field of geometry and mechanics made him famous. His understanding of levers, pulleys, wheels–axle helped the Greek army in its war with roman army.

“Archimedes’ principle states that when a body is partially or wholly immersed in a liquid, it experiences an upward force that is equal to the weight of the fluid displaced by it.

The elongation is produced in the string or the spring balance due to the weight of the stone. Since the extension decreases once the stone is lowered in water, it means that some force acts on the stone in upward direction.

As a result, the net force on the string decreases and hence the elongation also decreases. This upward force exerted by water is known as the force of buoyancy.

Why objects float or sink in a liquid?

When an object is put in a liquid, then two forces act on it :

Sinking of an object in water:

Floating of an object in water :

If we place a piece of cork on the surface of water in a beaker, then the cork floats. This happens because of the difference in their densities. The density of a cork is less than the density of water. This means that the upthrust of water on the cork is greater than the weight of the cork. So, it floats.

The ratio of mass and volume of the body is known as the density of the material of the body.

or the mass per unit volume is known as the density of the material of the object.

It is pure number having no unit.

Relative density for solids and liquids can also be determined with the help of Archimedes principle.

By definition, we have

Relative density of a solid can be measured by weighing it first in air and then when fully immersed in water.

Let weight of the body in air = W1

Let the weight of a body in air = W

Weight of the body fully immersed in water = W’

Weight of the body fully immersed in liquid = W’’

∴ Relative density of the liquid =

Archimedes principle is used to design :

Tale of densities and relative densities of some substances:

Law of floatation is an extension of Archimedes principles.

When a body is immersed partially or wholly in a fluid, then the various forces acting on the body are (i) upward thrust (B) acting at the centre of buoyancy and whose magnitude is equal to the weight of the liquid displaced and (ii) the weight of the body (W) which acts vertically downwards through its centre of gravity.

Thus law of floatation is defined as follows :

Relation between Density of Solid and Liquid :

= Fraction of volume of body immersed in liquid