Variation is concerned with the difference between the individuals of same species and also between the offsprings of the same parents.

Variation could be of two types:

Mutations that occur in the somatic cells are called somatic variations .New mutations occur twice as frequently in sperm as in eggs(germ cells), probably because so many more cell divisions are required to make sperm than eggs.

These variations are non-heritable and affect the somatic cells. They are acquired by the individual during the life time. Hence these are also called acquired variations.

They are produced by three kinds of factors : environment, use and disuse of organs and conscious efforts. e.g., muscular body of the wrestler (use of muscles), boring of pinna, beard and moustache style (conscious efforts).

These variations are the basis of Lamarck ‘s theory of evolution.

(B) Use and disuse of organs: Continuous use of an organ makes it better developed whereas constant disuse makes it reduced.

Germinal variation is the type of variation that occurs only in germplasm of organisms. So,only the variations from the germplasm and the gametes are passed on the offsprings.It may be apparent from the birth of the individual or may develop at any stage of life of the organism.

Germinal variations could be of two types :

Continuous variations are small, indistinct differences from the normal conditions (average) and are called fluctuations. These are not stable and non-heritable. There are of two types:

(B) Discontinuous variations :Such variations are large distinct differences from the parents and are termed as mutations or sports. These are stable and heritable. It is a jerky process. These variations are further classified into two types:

2. Meristic. These variations bring about change in number of certain parts in organisms. e.g.Polydactyly (more digits in fingers or toes)

Mutation was the basis of de Vries theory of evolution. 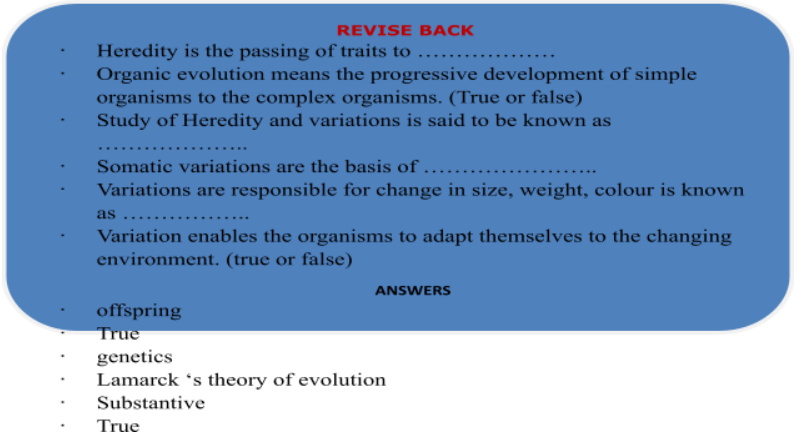