Human Health And Diseases of Class 10 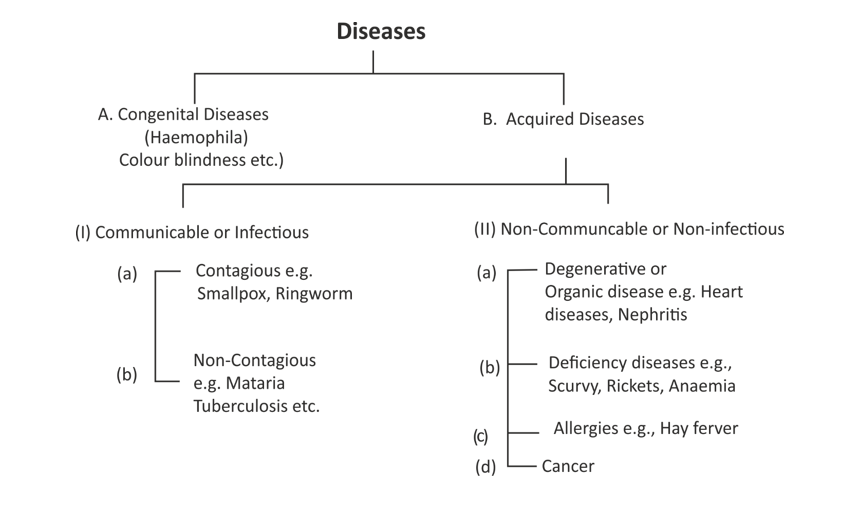 (a) Congenital Diseases: Congenital diseases are present right from the birth. They are caused due to either genetic disorders or environmental factors during development or due to combination of these factors. These diseases pass on from generation to generation e.g. haemophilia, colour blindness, sickle cell anaemia, down's syndrome, albinism etc.

(b) Acquired Diseases :These disease are acquired by an organism after birth and are not inheritable i.e., do not pass on from one generation to another. These are further classified into two categories:

(ii) Viruses: They are submicroscopic organisms. They cannot reproduce by themselves because they do not have their own metabolic machinery. They utilize the metabolic machinery of the host cell and multiply. The various diseases caused by viruses are common cold, influenza, dengue fever, AIDS, measles, mumps, polio, small pox, chicken pox, etc.

(v) Fungi: They are also muiticellular, eukaryotic, heterotrophic organisms. They cause ringworm, athlete's foot and other skin infections.

(b) Means of Spread: Infectious diseases are called communicable diseases because they can spread from affected persons to a healthy person. The means of communication or spread are different for different pathogens.

The diseases are spread to the healthy person in two ways :

Pathogens are transmitted from an infected person to a healthy person directly without an intermediate agents.

Its occur in following ways :

Transplacental transmission : The viruses of German measles and AIDS; and bacteria of syphilis can be transmitted from the maternal blood into foetal through placenta.

When the pathogens can be transmitted from the reservoir of infection to a healthy person through some intermediate agents.

It occurs in following ways :

Carriers are organisms which harbour disease causing germs without showing any signs of the disease themselves, but have the ability to infect other individuals.

Carriers of specific germs are called vectors. e.g., female insect Anopheles is the vector of Plasmodium (which causes malaria).

Treatment: The basic concept behind the treatment process is to target the biochemical pathways occurring inside an organism. For this certain drugs like antibiotics are prepared to alter or stop the biochemical reaction of the microbes at some stages to stop them to produce infections, toxins or to kill them or to check their further growth and multiplication. There are two ways in which these diseases are treated they are:

(i) Reducing the symptoms: By this, infection is not cured but some of the symptoms like fever, pain, aches, inflammation can be reduced to make the patient comfortable. This is done by medicines like painkillers etc.

Specific preventive measures :This can be done by two ways :