In a system of extended bodies there is one special point that has some interesting and simple properties no matter how complicated the system is. This point is called the center of mass.

where M = Σmi is the total mass of the system.

The components of equation (9.18) are defined as

Find the center of mass of the four point masses as shown in figure (9.10).

The position of the cm is 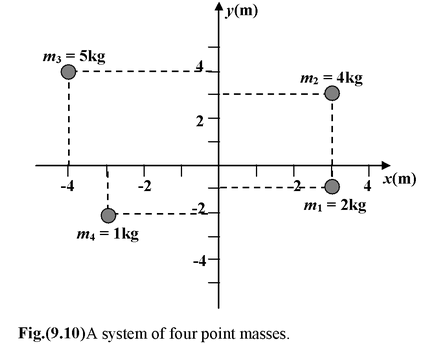 A thin rod of length 3L is bent at right angles at a distance L from one end. Locate the c.m. with respect to the corner. Take L = 1.2 m

Find the center of mass of a uniform solid cone of height h and semiangle α, as shown in the figure(9.14).

Motion of the Center of Mass

The instantaneous velocity of the center of mass is given by

Using the concept of center of mass, we may deal with the translational motion of extended objects or systems of particles, as if they were point particle with all the mass concentrated at the center of mass.

Differentiating equation (9.22), with respect to time, we get

Since the internal forces cancel in pairs, therefore,

The center of mass accelerates as if it were a point particle of mass M = Σmi and the net external force were applied at this point.

If the net external force on a system on particles is zero, the velocity of the center of mass remains constant.

A man of mass m1= 60 kg is at the rear of a stationary boat of mass m2= 40 kg and length 3 m, which can move freely on the water, as shown in the figure. The front of the boat is
2 m from the dock. What happens when the man walks to the front? Treat the boat as a uniform object.

The initial position of the c.m. is indicated by a star as shown in the in figure. Since there is no net external force, xc.m.is fixed. We treat the boat as a point particle at its center. In terms of the initial positions,

After the man walks to the front, let us say the front is at a distance d from the dock as shown in figure. In terms of the new positions, 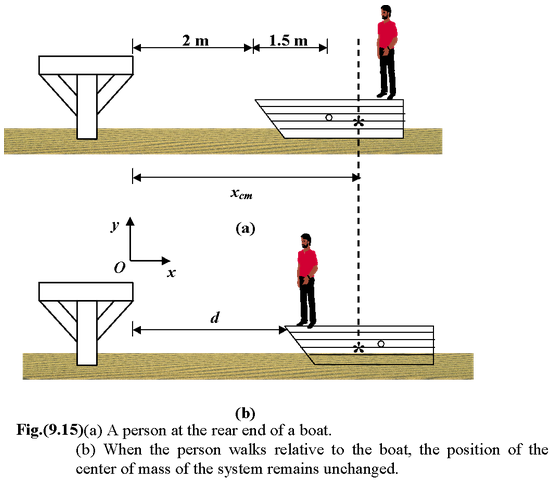 (a)The given time is of no consequence since vcm is constant for all times.

(b)Since the collision occurs at the origin, the position of the center of mass 2 s later is 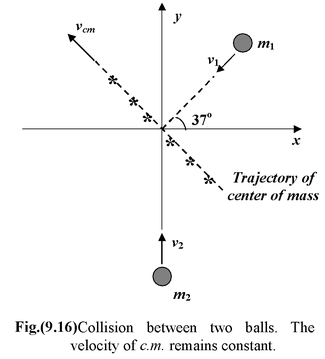 A 75 kg man stands at the rear end of a platform of mass 25 kg and length 4m, which moves initially at 4

m/s over a frictionless surface. At t = 0, he walks at 2 m/s relative to the platform and then stops at the front end. During the period of walking, find the displacement of

(c) the center of mass

Initially the man, the platform, and the cm have the same velocity, 4

m/s, as shown in the figure(9.17). When he begins to walk forward, his increase in momentum must be compensated for by a decrease in the platform's momentum. Let us say that the velocity of the platform relative to the ground while he is walking i.e.

The velocity of man relative to the ground is then

From the conservation of momentum, we have

Since the velocity of man relative to platform is 2 m/s,

to walk from the rear to the front.

Displacement of platform is

Displacement of the man is

Displacement of the center of mass 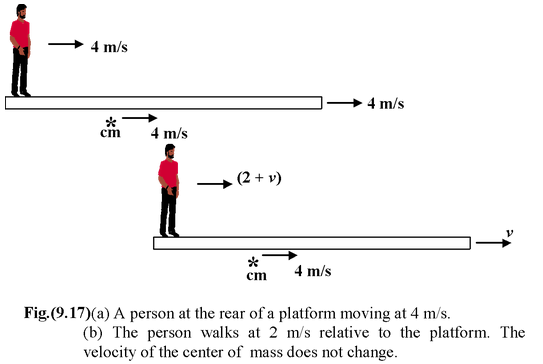 The kinetic energy of a system of particles is given by

, kinetic energy of the c.m. relative to the fixed origin O.

, kinetic energy of the particles relative to the c.m.

The term K′ may involve translation, rotation or vibration relative to the center of mass.

(b)the kinetic energy with respect to center of mass.

The velocity of the cm is obtained by using equation (9.22).

The figure (9.18) shows, the velocities relative to the cm are

The two terms for the total kinetic energy are