The process of removal of toxic wastes from the body of an organism is called excretion. The process of maintaining the right amount of water and proper ionic balance in the body is called osmoregulation.

The mode of excretion is different in different organisms. Many unicellular organisms remove these wastes by simple diffusion from the body surface into the surrounding water, while complex multicellular organisms use specialized organs for excretion. The organs that are involved in this process constitute the excretory system

In different animals, different organs of excretion are present. These are as follows:

”In organisms like Amoeba and Paramecium, most of the metabolic wastes are removed through the general surface of the body by the simple process of diffusion. Specialized organs of excretion are lacking.

Various organs are present in human to get rid of wastes.

CO2 from the surface of the lungs is removed by exhalation during breathing. 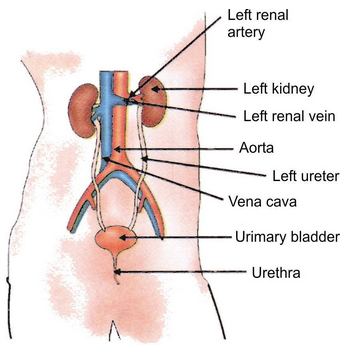 Kidneys are bean- shaped structures, about 10 centimetres long. They are located just above the waist on either side of the backbone. The right kidney is placed slightly above the left.It measures about 10 cm long, 5 cm wide and 4cm thick, weighing about 135 to 150 gms., constituting 1% of body weight.Its inner concavity called hilum.Ureter, Blood vessels, nerve etc. enter or leave the kidney through hilus (hilum).Remains covered by peritoneium only on the ventral or front side hence termed as retroperitoneal. A narrow tube called the ureter runs from the inner side of each kidney.

Leading from the bladder is another muscular tube called the urethra, which works as the outlet passage.

The end of the urethra is normally held closed by means of a ring of muscle (a sphincter), which controls the release of urine from the bladder.

Urine drains continuously out of the kidney into the ureters where it is forced downwards into the bladder by wave-like contractions of the ureter walls. The bladder stretches and expands in volume as it fills with urine, and when it is nearly full the stretching stimulates sensory nerve endings in its walls so that nerve impulses are sent to the brain. This is how a person knows when his bladder must be emptied. The sphincter muscle around the urethra is then voluntarily (i.e., consciously) relaxed to let urine drain from the bladder, through the urethra, and out of the body. This is called urination.

A kidney in section shows a dark-coloured outer zone called the cortex, and a pale-coloured inner zone called the medulla. Each kidney is made of a large number of excretory units called nephrons.Each nephron consists of two parts - a rounded, cup-shaped body called the Bowman’s capsule, and the tubular part or the collecting tubule. Bowman’s capsule contains a ball of finely-divided and intertwined blood capillaries which are formed by the repeated branching of the renal artery. These structures are called glomeruli (singular glomerulus). The blood capillaries bring waste and excess water from body to the kidneys.The medulla is distinct by the presence of 15-16 conical pyramids with broader end towards cortex. Each pyramid ends as renal papilla where many ducts of Bellini converge to open. The renal papilla fits over small funnel-like minor calyx, 2 to 3 minor calyces together open in still wider funnel called major calyx. Bowman’s capsule is made of two layered squamous epithelium, glomerulus and together called as Malpighian body or renal corpuscle. Podocytes are the cells of inner membrane with long process closely applied to the walls of capillaries (squamous cell layer with basement membrane). These 3 layers make the sieve like separation wall. Filtration slits are formed by the association of podocytes and capillaries wall. Blood enters glomerulus through afferent arteriole (of larger diameter) and leaves through via efferent arteriole (smaller diameter). Difference of diameter of both the arteriole generates the glomerular pressure. The tubular part is highly coiled. The collecting tubules of many nephrons join to form the collecting duct. Collecting ducts collect urine from the nephrons and transport in the medulla of the kidney.

· The function of tubular part of nephron is to allow the selective reabsorption of useful substances into the blood capillaries.

Formation of urine: The purpose of excretion is to filter out waste products from the blood.

1. The waste material is brought to kidneys by the renal arteries.

2. Blood is filtered, from the blood capillaries into Bowman’s capsule.

3. As this filtrate passes through the tubular parts of nephron, some useful products, such as glucose, amino acids, salts and major amount of water are selectively reabsorbed by blood capillaries surrounding the nephron.

4. The nephrons drain the remaining liquid waste (urine) into the collecting duct which eventually enters a long tube, the ureter. Human urine contains water and nitrogenous substances, most of which is urea.

Plants use completely different strategies for excretion than those of animals. Some of the important plant wastes and the methods by which they are removed are as follows :

1. The gaseous waste products are CO2 and O2 produced as a result of respiration and photosynthesis respectively. These gaseous wastes are removed through stomata in leaves and lenticels in stem and released in air.

2. Plants get rid of excess water by the process of transpiration.

For other solid and liquid waste, plants use the fact that many of their tissues consist of dead cells and that they can even lose some parts such as leaves.

3. Many plants waste products are stored in cellular vacuoles.

4. Some waste products are removed along with falling leaves and other plant parts.

5. Other waste products are stored as resins and gums in old Xylem tissue.

6. Plants also excrete some waste substances into the soil around them.

Important waste products of plants which are useful to humans are

Rubber is a significant article of plant origin which has unusual properties of elasticity, plasticity, resistance to electric currents, impermeability to water and adhesiveness. Most of the natural rubber is obtained from the latex of Heveabrasiliensis(Hevea or Para Rubber, Fam, Euphorbiaceae), Partheniumargeritatum(Guayule Fam. compositae), Manihotglaziorii(Leara Rubber) and the inferior quality rubber is produced by Ficuselastica(Assam or India Rubber, Fam. Moraceae).

Pine resin is obtained from species of Pinus. It is distilled to yield turpentine (25%) and resin (75%). Turpentine is an antiseptic solvent from paints and polishes. It is also used medicinally as anthelmintic. Resin is used in preparing writing paper, water proofing, sealing joints of pipes, soap, wheel greese, etc.

Damar (from Shorearobustaor Sal and related trees) is employed in the manufacture of varnishes and spirit polishes. 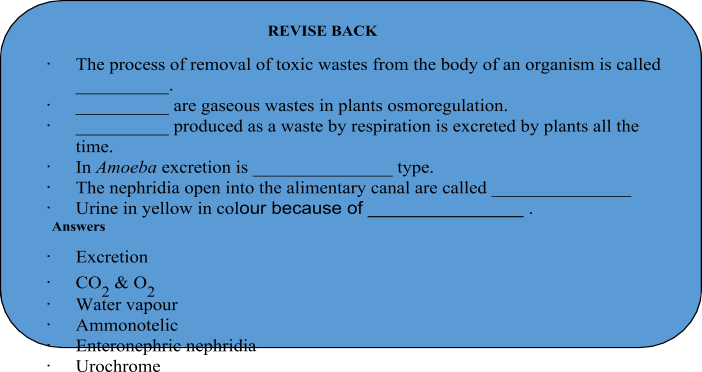