Matter is our surrounding of Class 9

The matter around us exists in three physical states on the basis of physical properties.

A solid is that state of matter which has definite shape, mass and volume.

However, when sugar and salt, are placed in different containers, they take up the shape of the containers, yet they (sugar & salt) are solids. This is because, the shape of individual sugar or salt crystal remains fixed whether we take it in our hand, or put in a jar or in plate.

(b) Solids possess rigidity: The solids have the tendency to maintain shape, when some outside force is applied (known as rigidity). They may break when dropped or hammered.

However some solids like rubber band, changes its shape when stretched under influence of force, but it regains its original position, when force is withdrawn. However, if excessive force is applied, rubber band breaks.

However some solids like sponge can be easily compressed. This is because sponge has minute holes in which air is trapped so that when we press it, air is expelled and the sponge is compressed.

A liquid is a state of matter which has definite mass and volume but no definite shape.


Liquids possess the property of Diffusion : Due to larger inter particle distances in liquids than in solids, the particles of a liquid have more freedom of motion than solids. Thus solids, liquids and gases all can diffuse into liquids as discussed below:

Thus, solids, liquids & gases – all can diffuse into liquids. However, the rate of diffusion of liquids is much higher than that of solids.

The force of attraction between gases molecules is very less

Similarly, gases do not have a definite volume, but attain the volume of container to which they are transferred.


This can be explained by the following experiment.

Experiment to study the compressibility of solids, liquids & gases : Take three syringes (about 100ml) and close their nozzles by rubber corks. Now remove the pistons from all syringes. Fill some water (liquid) in second syringe and chalk pieces (solid) in the third & leaving first syringe untouched. Now insert pistons back into syringes.

(e) The Kinetic energy of particles in the gaseous state is quite high :- Due to large inter particle distances and weak forces of attraction, the particles of a gas can move freely & thus, have large rotational, translational and vibrational motion and due to large translational motion, their kinetic energy is quite high which can be further increased by increasing the temperature of gas.

The motion and inter particle distances in solids, liquids & gases are as shown in fig. 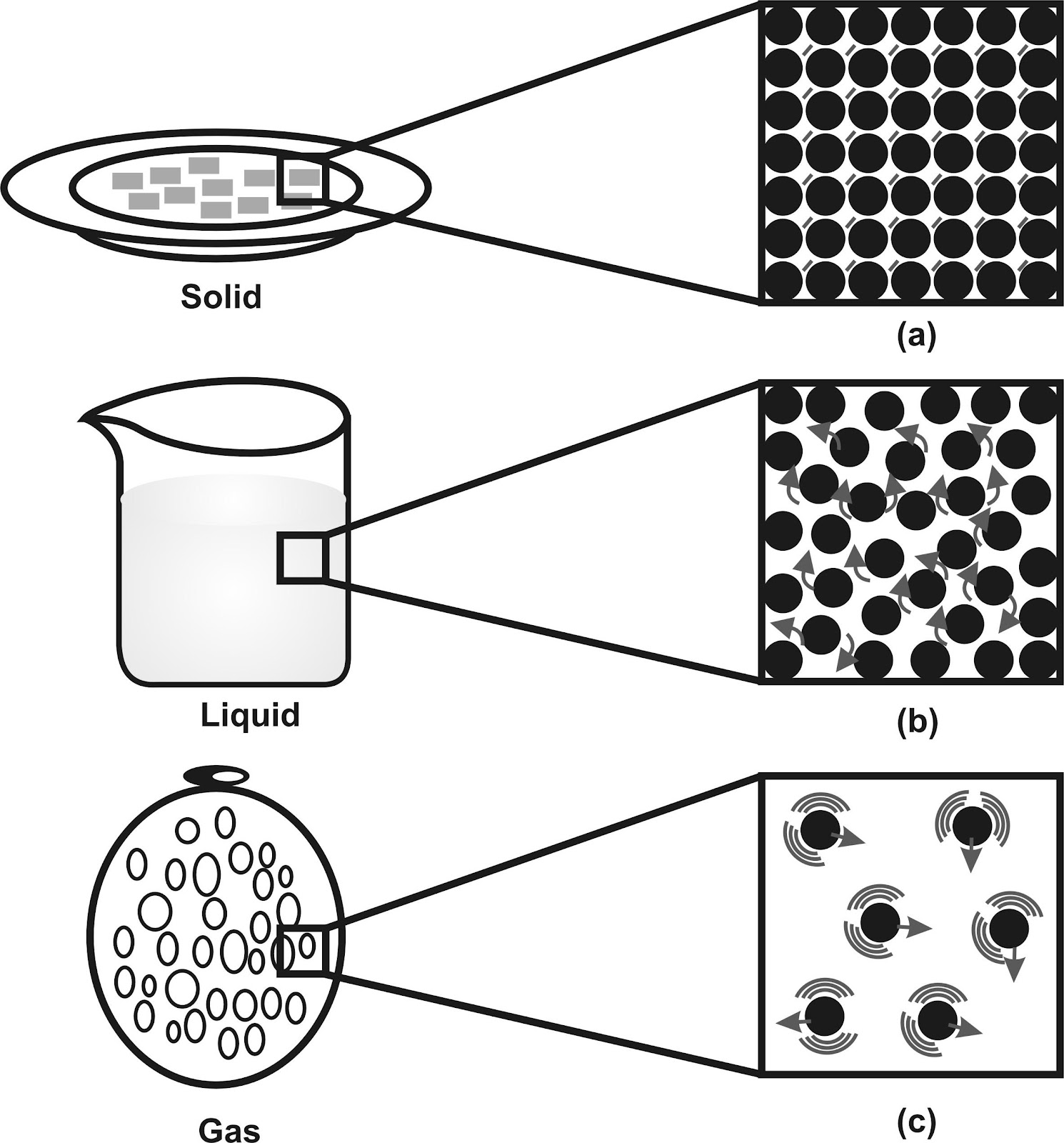 a, b and c show the magnified schematic pictures of the three states of matter.

The motion of the particles can be seen and compared in the three states of matter.

The most familiar example of diffusion of gases is found in our homes, e.g. we come to know what is cooked in the kitchen without even entering there, by the smell due to rapid diffusion. (i.e. rapid intermixing of particles of aroma with particles of air). Since rate of diffusion becomes faster at high temperature the smell of hot cooked food travels faster than that of the cold food.

Comparison of the characteristics of three states of matter.