Cockroaches are world-wide in distribution and found in such places where darkness, warmth, dampness and plenty of organic debris is available. They are nocturnal and omnivorous, cursorial – fast runner.

Three species of cockroaches are commonly found in India. These are :

P. americana : largest and most common. Commonly called as American cockroach, Bombay canary or Ship cockroach. In both the sexes, there are wings which are larger than the body.

B. orientalis (Oriental cockroach or Black beetle) : black or dark brown medium-sized species. The female has rudimentary wings which are not helpful in flight. Male has wings which are short and are not upto the end of the body.

B. germanica (German cockroach or steamfly) : Smallest of the domestic species of the cockroaches, pale yellow-brown in colour.

Body is narrow, elongated, bilaterally symmetrical and flattened, measuring about 3-4½ cm in length and l½ to 2 cm in breadth.

Co1our is reddish brown with a paler yellow area around the edge of pronotum and two dark patches over it. 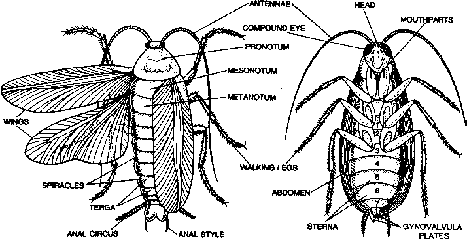 The entire body of the cockroach is covered with a thick, hard, chitinous cuticle, which is secreted by epidermis, forming the exoskeleton.

The exoskeleton of each segment consists of four plate-like pieces called sclerites. Dorsal sclerite is called tergum or tergite, ventral is called sternum or sternite and two lateral are called pleura or pleurites.

The sclerites of each segment are joined with each other and with those of the adjacent segments by means of soft and flexible articular or arthrodial membranes. This gives the

sclerites, some freedom of movement upon each other at their edges.

The stiff, immovable bristles or spines covering the body and its appendages are in fact the outgrowths of the cuticle, the movable hair-like setae occurring at some places are however

secreted by special trichogen cells of the hypodermis lying below the cuticle.

Embryologically, the body of cockroach is formed of 20 segments - 6 in head, 3 in thorax and 11 in abdomen.

Due to complete or incomplete fusion between some segments during development, the number of distinct segments are reduced in the adult.

All segments of the head are fused. Thorax consists of 3 segments. Only 10 segments are retained in the abdomen of the adult. Of these, only the first seven are distinct in females and first

nine in males. The remaining hinder abdominal segments become small and modified into external genitalia that are hidden under the last distinct segment.

When wings are removed, the three regions — head, thorax and abdomen become distinctly visible. A small, soft and mobile neck or cervicum connects the head with thorax.

Small, triangular and its narrow end is bent downwards in hypognathous position i.e. at an angle of 90° from the long axis of the body. 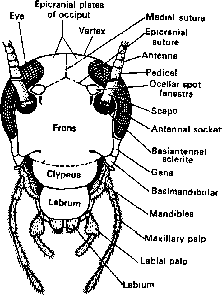 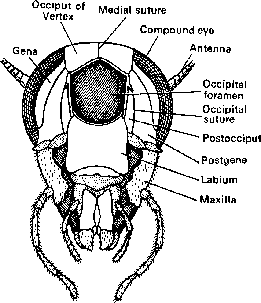 On each lateral side, it bears a large and blackish compound eye.

At the base of each antenna, on inner side, a small rounded and light coloured area called fenestra or ocellar spot representing simple eye is present. Endoskeleton of head is called tentorium.

All sclerites of the head are fused, forming a strong head capsule, exhibiting only faint lines of fusion.

The notum of prothorax called pronotum is very large and covers the neck also. Each of the mesonotum and metanotum bears a pair of wings.

Largest and the broadest, relatively more flattened and softer part behind the thorax.

There are ten tergites. In both males and females, the 8th and 9th tergites are mostly covered by the 7th. The 10th is somewhat bowl-shaped and posteriorly bifurcated into two lobes.

Ventrally the abdomen has 9 sternites in male and 7 in females.

In females, the last sternite (7th) is larger and boat-shaped and together with indistinct 8th and 9th sternites it forms a chamber-like structure called gynatrium, posterior part of this

In males, the 9th sternite bears a pair of spine-like anal-styles.

In both male and female cockroaches, several small chitinous appendages are located around the gonopore. These help in reproduction and hence called gynapophyses.

At several places, certain processes of exoskeleton extend into the body and form endoskeletal elements which provide attachment to muscles and hence called apodemes.

Antennae : These are a pair of long, thread-like appendages, extending forward from an antennal socket located dorsally upon head capsule near the eye. These are very mobile and act as tactile, thermal and olfactory receptor organs. Each is formed of several small segments called podomeres. The first basal podomere, called scape, is largest. The second called pedicel, is narrow and elongated. The remaining long, slender and many-jointed part of each antenna is called flagellum. 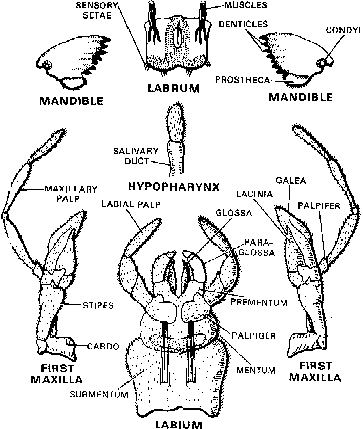 The remaining three pairs of cephalic appendages are small and located around the mouth. Hence together with labrum of head capsule and hypopharynx, these appendages comprise the mouth parts of the cockroach. These help in ‘biting and chewing’ its food.

Labrum : The broad, flattened terminal sclerite of the dorsal side of head capsule, movably articulated to the clypeus acts as upper lip.

Mandibles : Thick, hard and triangular appendages beneath the labrum, one on each lateral side of the mouth, bearing pointed, teeth-like processes called denticles.

First maxillae : Located on each side of the mouth next to mandibles. These serve to hold food particles in between the mandibles for cutting and chewing and also bear olfactory receptors.

Labium: The second maxillae are fused together forming a single large structure which covers the mouth from ventral side, hence called the ‘lower lip’ or labium. It bears tactile and gustatory sensory setae.

Hypopharynx : A small, cylindrical mouth part, sandwitched between first maxillae and covered by labrum and labium on dorsal and ventral sides respectively. It bears several sensory setae on its free end, and the opening of common salivary duct upon its basal part. 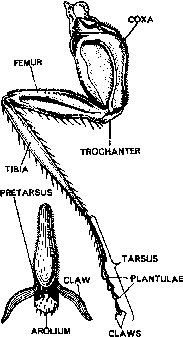 Fig. A leg of cockroach and its pretarsus

Each thoracic segment laterally bears a pair of long locomotory legs articulated to its pleurites.

All legs are structurally similar. Each is formed of 5 main podomeres. These podomeres are —

(i) A long and broad coxa movably articulated to the pleurite of its side.

(iv) A tibia which is longer but thinner than femur.

(v) A long and thin tarsus which is itself formed of 5 segments called tarsomeres.

The apical tarsomere bears a terminal structure called pretarsus, which includes a hook-like claw on each side of a median broad and setae bearing adhesive pad called arolium. A similar but smaller adhesive pad, called plantula, is located at each joint of tarsus. All pads help the cockroach in climbing up smooth walls, doors and other surfaces. Minute spine-like setae are scattered upon the surface of each leg.

The wings of first and second pairs are respectively articulated to the tergites of mesothorax and metathorax.

Wings of the first pair are narrow, thick, hard and leathery and those of the second pair are broad, thin, soft and membranous.

During rest, the hind wings remain folded and completely concealed under forewings. Forewings are called wing covers or elytra, or tegmina

Structurally, the wings are thin folds of skin itself. The skin epidermis later disappears leaving a double layer of cuticle alone.

A network of slender and branched tubules, called veins or nervures is spreaded between the two layers of cuticle. These tubules communicate with haemocoel. Hence, haemocoelomic

fluid circulates in these tubules. An air tube or trachea and a fine nerve are also present in each nervure.

Abdominal segments lack locomotory appendages. There are certain small structures associated with gonopore, which are different in male and female cockroaches.

Cockroach has a wide fluid-filled body cavity in which viscera are contained. This cavity is not true coelom because it is not surrounded by a peritoneal lining. It is a cavity secondarily

formed by merging of large sinuses of tissue fluid. It contains blood and hence called haemocoel cavity. True coelom is represented only in the cavities of gonads.