Heart and Circulatory System of Frog

Heart and Circulatory System of Frog

Opening of sinus venosus into right auricle is guarded by a pair of sinuauricular valves. Left auricle receives oxygenated blood via common pulmonary vein from lungs through a circular pore. 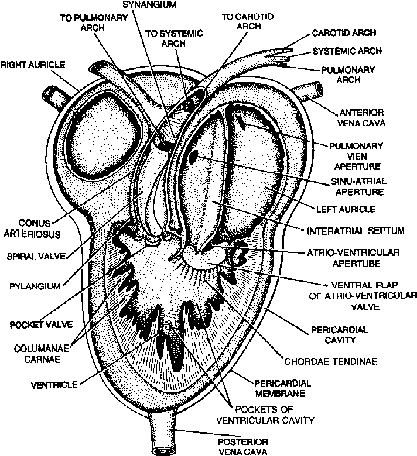 From the right side of ventricle arises truncus arteriosus and the opening is guarded by semilunar valves and consists of two parts : proximal conus arteriosus or pylangium and

Frog has 3 pairs of aortic arches : carotid, systemic and pulmocutaneous.

There are two theories to explain working of heart. Old theory (Brooke, 1858) states that the blood is pumped out in three phases.

Modern theory (Vandervael, 1933 and Foxon, 1958) states that there is complete mixing of blood in the ventricle of frog and mixed blood is pumped out into all the three arches. Hepatic portal system and Renal portal system are present in frog. Hepatic portal system is formed by the union of gastric vein (stomach); intestinal vein (duodenal + splenic + rectal), which enters the liver and ramifies into capillary system. The digested food from the various parts of alimentary canal is passed on to liver for storage. Renal portal system involves renal portal vein which receives sciatic vein and runs along the outer border of the kidney. It opens into kidney after branching into a set of capillaries. As the blood from the posterior part of the body pass through this system, it becomes free from these wastes and it is then put into posterior vena cava by renal arteries.

Squeezed fluid from the blood (Lymph) is collected by the lymph capillaries, which unite to form lymph vessels. Lymph flows in these vessels in one direction only i.e., towards heart. Lymph vessels open into lymph sinuses (about 20 lymph sinuses).