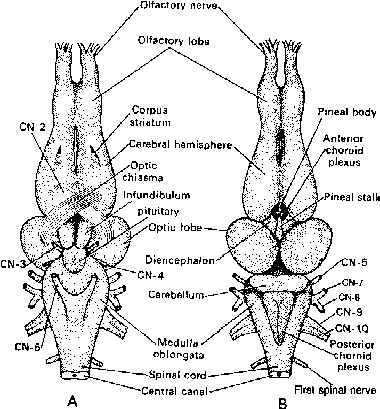 Fig. Brain of frog from ventral (A) and dorsal (B) views: CN : cranial nerves originating from brain

Brain is covered by two meninges: outer tough, fibrous duramater and inner vascular, pigmented piamater closely attached to the brain. Sub-dural space between duramater and piamatar is filled with cerebrospinal fluid which acts as shock absorber.

Cerebellum behind the optic lobes is not well developed in frog. Medulla oblongata is the posterior most part of the brain and encloses 4th ventricle or metacoel. Its roof has vascular posterior choroid plexus.

Spinal cord is the continuation of medulla. It has a dorsal fissure and ventral fissure. Spinal cord has a central canal as an extension of 4th ventricle of medulla oblongata. It is surrounded by H-shaped grey matter. Corners of grey matter are produced into a pair of dorsal and a pair of ventral horns. Dorsal horn is sensory while the ventral horn is motor in nature.

White chalky masses called calcareous bodies or glands of Swammerdam cover the dorsal root ganglia and are believed to form reserves of calcium. 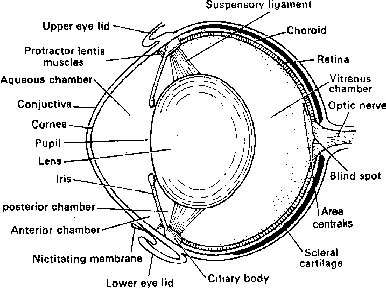 Outer sclerotic ring is cartilagenous and cornea is the part exposed out. Middle highly vascular, pigmented layer is choroid. Iris is yellow pigmented and perforated by a central aperture, the pupil. Retina is the innermost coat of eyeball and consist of inner pigmented layer and an outer receptor layer. Rods and cones are light sensitive structures found in retina.

Rods have rhodopsin or visual purple meant for night vision while cones have iodopsin responsible for day light and colour vision.

The anterior chamber is present in front of lens filled with aqueous humour while the chamber behind the lens is vitreous chamber filled with vitreous humour. Eye ball is moved in the eye orbit by a set of six muscles – two are oblique and four are recti. Besides, there are retractor bulbi and levator bulbi muscles for intrusion or protrusion of eye ball into the eye orbit, respectively.

Frog is myopic (short-sighted) at land and hypermetropic (long-sighted) in water. It has monocular vision.

Ear of frog has only middle and internal ear. Tympanic membrane is present at the body surface. Middle ear has single bone called as columella auris. Pressure of middle ear is controlled by eustachian tube.

Semicircular canals are three in number : two vertical and one horizontal. The three canals lie at right angles to each other. At their ends, these canals are dilated into ampullae. From the posterior side of sacculus arises two blind sacs – lagena or cochlea and para basilaris. Endolymph contains numerous calcareous crystals, ear stones or octoconia. Membranous labyrinth bears inwardly projections – acoustic ridges. The ridges in the ampulla are cristae and those with vestibule are maculae. These are involved with balance.

Jacobson’s organ are chemoreceptors and open into the nasal chamber.