Organisms And Their Environment

In 1859, the French Zoologist, Isodore Geoffroy St. Hilaire had proposed the term ethology for “the study of the relations of the organisms within the family and society in the aggregate and in the community.’’ At about the same time the English naturalist, St. George Jackson Mivart coined the term hexicology.

The word ecology, as given by German biologist, Ernst Haeckel in 1869, has its origin from the Greek words, Oikos means ‘home’ and logos meaning ‘to study’.

Prof. Ramdeo Misra is regarded as ‘Father of Ecology in India.’ Other famous indian ecologists include G.S. Puri and S.C. Pandeya.

Autecology : This is also known as ecology of individuals, where we study the relation of individuals species to its environment. With an autecological approach, individual species are the units of study. These are studied for details of their geographic distribution, morphology, taxonomic position and life-cycle etc., alongwith the various ecological factors which might influence different stages of their life cycles.

Synecology : Study of relationships between communities & environment. Under natural conditions, however, organisms– plants, animals, microbes etc., live together as a natural group affecting each other’s life in several ways. Thus, more complex situations exist where the units of study, instead of single organisms are groups of organisms known as a community. Such an approach where units of study are groups of organisms is called synecological approach.

Other branches of ecology are

Genecology : Study of genetic composition and changes in relation to the origin of ecads, ecotypes, new species, etc.

Organism (Individual) : It is a distinct living entity or distinct package which carries out all life processes in its body, separate from those in other individuals. Individual organism is the basic unit of ecological hierarchy as it continuously exchanges materials and information with its environment. New individuals develop from pre-existing ones. Hereditary characters are transferred during this process. The constituents of an individual cannot survive independently.

Species : Population of closely similar, interbreeding individuals which are reproductively isolated from other such population is called as species. In other words, species constitute groups of individual organisms which freely interbreed among the members of the same group, but do not do so with members of other such groupings. They are also groups of organisms which show close structural similarities and similarities in their way of life.

Biological or Biotic Community : It is an assemblage of populations of different species of plants, animals, bacteria and fungi which live in a particular area and interact with one another through competition, predation, mutualism, etc.

Landscape : It is a unit of land distinguished by a natural boundary and having patches of different ecosystem. e.g., Southern peninsula.

Biome : A complex of several types of communities, some in climax stage and others in different stages of succession, maintained under more or less similar climatic conditions is known as a biome.

Biosphere : The planet earth along with the atmosphere (air, land, water) that sustains life is known as biosphere. 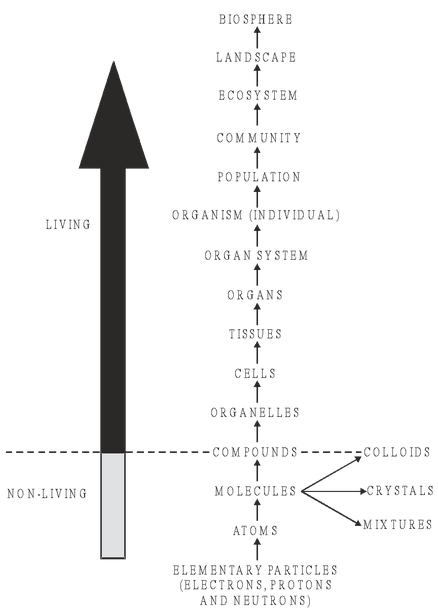 SPATIAL AND TIME SCALES OF ENVIRONMENT

Interaction of organisms with their environment takes place at several spatial and time scales. For example : A single bacterium in soil bacterium interacts with environment within fraction of cubic cm. area. A tree interacts with surrounding environment at large spatial scale. The activities of organisms influence the hydrosphere, the lower atmosphere and the near-surface part of the lithosphere. This happens due to exchange of matter and energy. Organisms have to cope with external environment from few minutes to days, seasons or longer period of geological time scale, i.e. over a range of time scale. Changes in lithosphere takes place gradually and requires longer time when compared with phytoplanktons, where population changes within few days with change in light conditions.

Climate It is average weather of an area. Weather reflects the hourly, daily or weekly changes in climatic factors and climate reflects longer period such as seasons or years. Temperature and rainfall are two most important factors which effect the climate of an area.

On the basis of variation in mean temperature along latitude, the main climatic regions are :

The mean temperature declines as we move from tropical to arctic region. A similar climatic zonation occurs with increasing altitude in the mountains. A mountain located in a tropical region will successively have tropical, subtropical, temperate and alpine zones with increasing altitude. Similarly, in temperate zone, the high altitudes will have alpine climatic conditions. Within each temperature-based climatic zone, the annual precipitation (rainfall and/or snowfall) varies considerably. These two factors, temperature and precipitation, together determine the vegetation and soil types.

Climate is of two types

Microclimate (Micro Environment) : The climate in which the organisms actually live is very much different from the gross environmental conditions. This immediate environment of the organism is called effective climate or microclimate. For instance, wind, rate of evaporation, humidity, temperature etc., prevailing in areas of limited size make up the microclimate.

Microclimates are very important in the study of distribution of microorganisms. Thus, the microclimates of a fallen log, surface of a leaf, layers of litter of forest, are areas worthy of much investigation, that show much local variations in different ecological factors like temperature, humidity, energy content etc. The variations in microbial flora in different layers of forest litter is due to such local variations. Moreover, microclimates are also very important in relation to infection of host plants by the pathogens. Plants in their immediate vicinity modify their own environment and these local variations play important role in determining the initiation or extent of infection by the pathogens. For example, on the leaf surface, there is no single surface temperature.

Similarly, inside a single oak leaf, the external changes in air movement and light intensity profoundly affect the temperature values inside the leaf.

Macroclimate (Macro Environment) : Forest is an example of macroclimate. Here, dense foliage retards the amount of light falling on ground. It also changes the prevailing temperature. The day-time air temperature inside the forest is lower than outside. Also, the interior of a forest may be more humid than a nearby non-forested area.

The place where an organism is found is called habitat. Organisms are influenced by specific habitat. Plants found in salinevsoil bear special characters which are not present in plants growing in non-saline soil.

A habitat can have many ecological niches and support many different types of species.Ecological niche in an organism indicates the various conditions it can tolerate, resources used and its functional role in ecological system. Two different species cannot have exactly same niche. The term niche was for the first time used by Grinnel (1941) to explain micro-habitats.