They are described under two headings—

Morphological Features of Characteristics Of Xerophytes

In contrast with hydrophytes which develop in conditions with plenty of water, xerophytes develop under water deficient conditions. Thus, in order to secure water, which is present in less amount and, moreover, in deeper layers of soil, in xerophytes roots become the principal organs of primary importance.

The root system is thus very well developed, with the following characteristics:

On stems and leaves there are generally hairs (e.g., Gnaphalium, Aerua, Calotropis) and/or waxy coating.

Leaves are very much reduced, scale like appearing only for a brief period, sometimes modified into spines. Lamina may be long, narrow or needle like as in Pinus or divided into many leaflets as in Acacia.

Foliage leaves, wherever present, may become thick, fleshy and succulent, or tough and leathery in texture. Leaf surfaces are generally shiny and glazed to reflect light and heat (e.g., Nerium). In some non succulent xerophytes, particularly grasses as Ammophila, Poa, and Agropyron, leaves become folded and rolled in such a manner that the sunken stomata become hidden, and thus rate of transpiration is considerably minimized (i.e, their epidermal cells renwin mostly turgid).

In some of them as Euphorbia, Acacia nilotica, Zizyphus jujuba and Capparis aphylla, stipules become modified into spines.

Anatomical Features of Characteristics Of Xerophytes

Roots hairs and root caps are well developed. In Opuntia, roots hairs develop even at the root tips. Root may become fleshy to store water as in Asparagus. In Pinus edulis and Calotropis , roots possess rigid and thickened walls. 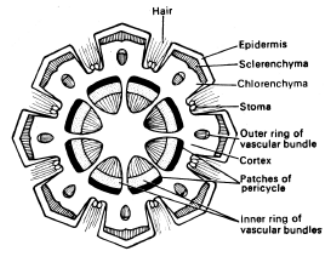 Leaves of non succulent xerophytes, such as Nerium and Pinus etc. possess: