Formation Of Baby Inside The Womb

Reproduction in animal of Class 8

FORMATION OF BABY INSIDE THE WOMB

It is a physiological barrier and an ultrafilter between the foetal blood and the maternal blood.

It is the expelling of the fully formed young one from the mother's uterus after the gestation period.

YOUNG ONES TO ADULTS:

The transformation of the larva into an adult through drastic changes is called metamorphosis. 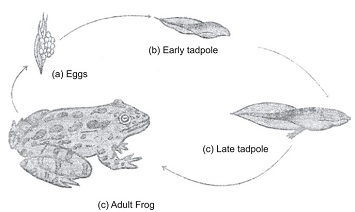 Test tube baby is the main achievement of biotechnology in human welfare. The most important human aspect of this technique is that the ladies deprived of children become capable of being pregnant. In this technique, the ovum is obtained from the body of the female and is fertilized by the sperm of the male, under controlled conditions. This whole process is completed outside the body of the female, in the laboratory. If the egg cell or ovum is correctly fertilized and the process of cleavage starts in the fertilized egg, then it is transplanted into the uterus of the female, where it undergoes normal development. Test tube baby is a baby obtained by normal development in uterus of the female but after in-vitro fertilization in the lab. The first test tube baby of the World, Louise Joy Brown was born on 25th July, 1978 in Britain. The first test tube baby of India "Harsha" was born in 1986.

Cloning is the production of an exact copy of a cell, any other living part, or a complete organism. Cloning of an animal was successfully performed for the first time by Ian Wilmut and his colleagues at the Roslin Institute in Edinburgh, Scotland. They successfully cloned a sheep named Dolly. Dolly was born on 5th July 1996 and was the first mammal to be cloned. Dolly was given birth by Scottish blackface ewe, it was found to be absolutely identical to the Finn Dorsett sheep from which the nucleus was taken. Since the nucleus from the egg of the Scottish blackface ewe was removed, Dolly did not show any character of the Scottish blackface ewe. Dolly was a healthy clone of the Finn Dorsett sheep and produced several offspring of her own through normal sexual means. Unfortunately, Dolly died on 14th February 2003 due to a certain lung disease. 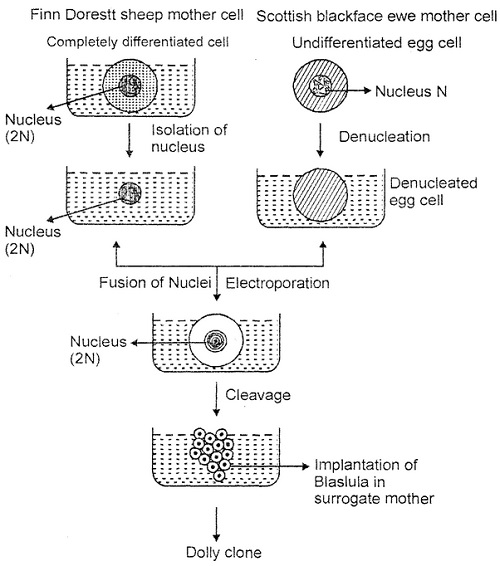