Algebra is branch of Mathematics in which we should study more as a subject for mental discipline than for anything else. Algebra is a langue to understand mathematics or convert our thought to mathematical expression. Algebra, like arithmetic is a science of numbers with the distinction that the numbers in algebra are generally denoted by letters instead of by figures .We have to understand basic terminology before starting this exercises.

Symbols: The letters of the alphabet a, b, c, ….. are used to denote numbers and the signs

+, –, ×, ÷, =, ….. and are used either to denote operations to be performed upon the number to which they are attached or as abbreviations. These letters and signs are called symbols.

In the given example 5a means letter a is multiplied by 5.

An expression is a mathematical sentence; it doesn’t have an equal sign.

The parts of an algebraically expression that are connected by the signs + are – are called its terms.

Different terminology are used for Expression and Term like:

There are three parts of most expressions: the variable, constant, and coefficient.

Variable: An unknown or changing number. Often represented by “x”.

Constant: A number that doesn’t change

Coefficient: The number that is multiplied by the variable

Quantity: Anything that can be represented by a number is called a quantity

Ex : Time, weight, money, distance etc. Quantity is also often used in the sense of number, integral or fractional. An algebraic expression also is some times called a quantity.

Variables : Any expression involving a letter is called a function of that letter. Thus,

The letters of which a function consists are called its variables.

Expressions are either simple or compound. A simple expression is one which has no parts no parts connected by the sign + or –, i.e., which consists of only one term, as monomial.

and is also called a

A compound expression consists of two or more terms, if it consist of two terms, as 2a + 5bcd,

it is called a binomial.

And if of more than three terms, a Multinomial or a polynomial.

Let’s break it down further.

Terms are each separate values in an expression. They can be separated by operations, like plus and minus signs 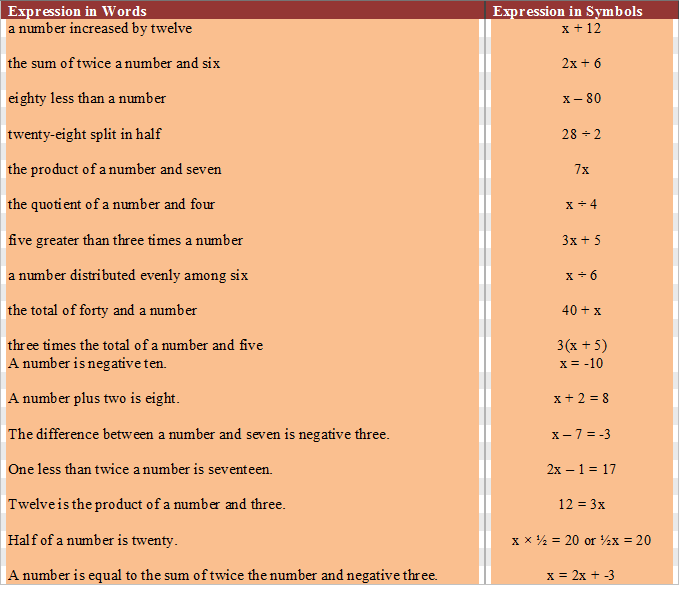