It is outermost rigid, freely permeable layer found outside the plasma membrane in all the plant cells, bacteria, blue-green algae, some protists and all fungi.

Cell wall is a rigid semi-elastic, semi-transparent, supportive and protective covering of cell in plants, fungi, prokaryotes and some protists Amongst prokaryotes a cell wall is absent in mycoplasma. It is also absent in most reproductive structures of plants like gametes and zoospores.

Cell wall is not completely dead or nonliving structure. It is metabolically active.

Matrix – It is an amorphous gel-like ground substance of the cell wall. Matrix consists of water, pectin, hemicellulose, lipids and proteins.

Middle Lamella – It is a thin, amorphous and cementing layer between two adjacent cells. Middle lamella is the first layer which is deposited at the time of cytokinesis by the activity of GC and ER. It is absent on the outer side of surface cells. It is made up of calcium and magnesium pectate.The softening of ripened fruits e.g. Tomato is due to the partial solubilization of pectin by the enzyme polygalacturonase into jelly like substance.

Primary wall – Present between middle lamella and secondary wall. It is commonly thin (0.1 – 0.3 μm) and has the capacity of extension. Some cells like leaf cells, fruit cells, cells of cortex and pith, possess only primary wall. It consists of a number of microfibrils embedded in the amorphous gel like matrix. In most of the plants microfibrils are made up of cellulose.

Secondary wall – It is present inner to the primary membrane in mature cells e.g. tracheids, vessel elements; fibres, collenchyma, It is made by deposition of material over the surface of pre-existing structure. It is thick and made up of at least three layer. Innermost layer some times have xylans, then it is called tertiary wall e.g. tension wood in gymnosperms. It is less hydrated (30–40%) as compare to primary wall. Cellulose content is high (20–40%).

A number of different materials may also be deposited in the wall. The important ones are:

Lignin: It is produced by polymerization and dehydrogenation of aldehydes and alcohols. lignin reduces the water content of the wall matrix and increases its hardness. Deposition of lignin is called lignification.

Cutin: Another fatty substance produces a layer outside the epidermal cells. cutin reduces the rate of surface transpiration. 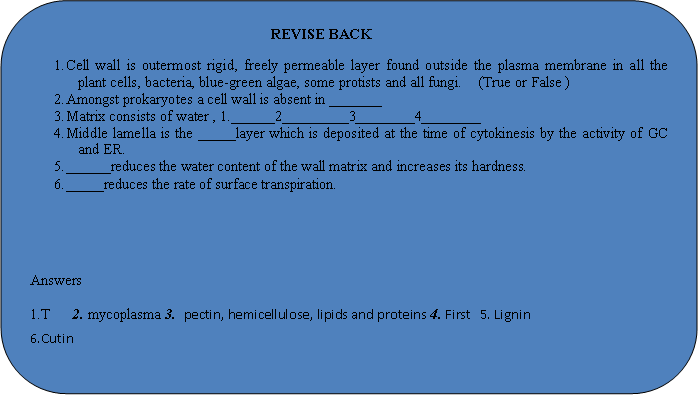