Cell division and cell development occur simultaneously in the organisms in which former is more significant and takes place continuously throughout life to certain extent.

Cells divide to replenish the degenerating cells so that protoplasm is continuously renovated by the accumulation of food material and growth. This process of replacement and repairing of cells was first suggested by ‘Nageli’ in 1846 and later ‘Remark’ described the process of cell division.

Cell division can be clearly divided into two phases, first is nuclear division or karyokinesis and second is cytoplasmic division or cytokinesis. Three Types of Cell Division are :

It is the process of cell division in which unequal division of chromatin materials or chromosomes takes place. Amitosis occurs in lower plants, bacteria, some protozoans, some bone cells, in some white blood cells and pathological cells.Its a simple division and active chromosomes do not take any active part in it. So it is also known as vegetative division.

The process of division takes place as follows :

I. Prophase (pro: first) is the beginning of mitosis. Events, which take place during this phase, are:

Cytokinesis is the division of cell cytoplasm into two separate cells. It usually occurs along with the formation of daughter nuclei after the nuclear division. It differs in plant and animal cells. At times, cytokinesis do not follow karyokinesis, as a result a multinucleate condition arise such cell is called coenocyte or syncytium.

Animal cells: A shallow groove appears in cytoplasm because of constriction of microfilaments, leading to cell division.

Plant cells: In plants, a plate appears at the equator followed by cell division, it is also called as cell plate.

Definition : Reproduction is one of the most important characteristics of the living system by which we can make a distinction between living entities from a non-living system. There is a need of dissimilar types of gametes (male gamete and female gamete) to achieve the process of reproduction. If the gametes were diploid i.e., 2n number of chromosomes, the resulting zygote or new individual would have twice the diploid chromosomes number. But every organism contains a definite number of chromosomes and to maintain this, there is a special type of division in the cells responsible for the production of gametes. This special type of cell division in the gamete producing cells is referred to as meiosis or meiotic division.A cell undergoing meiosis will divide two times; the first division is meiosis 1 and the second is meiosis 2. The phases have the same names as those of mitosis. A number indicates the division number (1st or 2nd):

I. Prophase I : It is further divided into six phases namely Proleptotene, Leptotene, Zygotene, Pachytene, Diplotene and Diakinesis. 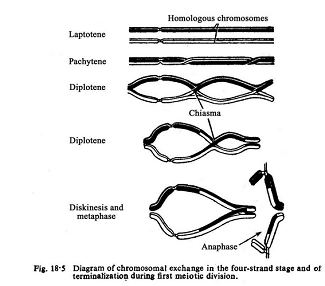 After this, cytokinesis takes place resulting into formation of four daughter nuclei with haploid number of chromosomes. 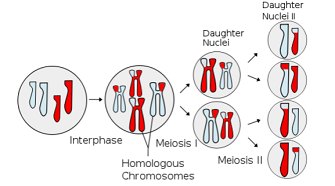 DIFFERENCE BETWEEN MITOSIS AND MEIOSIS

The differences between mitosis and meiosis are as follows: