Carbon and its compound of Class 8

About Carbon and its compound

Carbon is the seventeenth most abundant element found in earth’s crust. It is present in the bodies of plants, animals all living organisms, and also in several non-living things. It is present in air as CO2. It forms the largest number of compounds. Compounds of carbon are studied as a separate branch of chemistry known as Organic Chemistry. It exists in free as well as in combined form.

Diamond, graphite and coal are the free forms of carbon. Marble, paper, cloth and sugar are the combined forms or compounds of carbon. Carbon has a unique property that it can join with other carbon atoms to form carbon - carbon bonds.This can result in the formation of compounds with long chains. This property is called catenation.

The most important combination of carbon is with hydrogen to form a set of compounds known as Hydrocarbons.To score More in your class 8 preferNCERT solutions for class 8and go through with chemistry notes prepared by Physics Wallah.

Carbon is widely distributed in nature, both in Free State and in the combined state.In free state it occurs as diamond, graphite and coal.

In the combined state, it occurs:

(i) Carbonates in many minerals such as:

(B) In the gaseous state as:

All living systems are made up of carbon compounds such as fats, carbohydrates, proteins, vitamins, hormones etc.,

In a nutshell, life as we live today would have been impossible without carbon compounds. 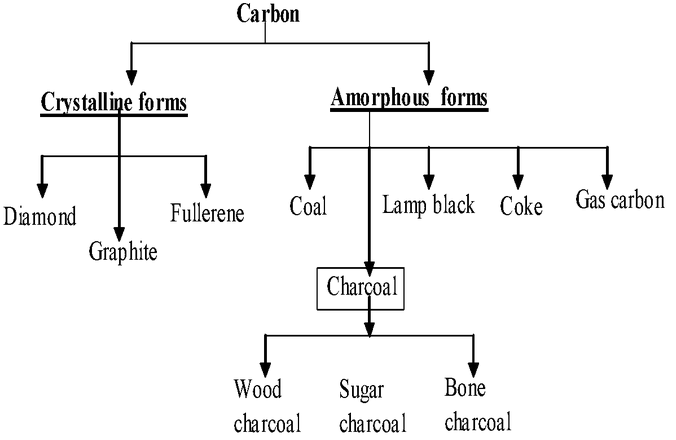 Q1. What are carbon and its compound?

Ans. The use of carbon in class 8 are

Q3. What are the four-carbon compounds?

Q4. How do you read carbon and its compounds?

Ans. Carbon compounds are those whose molecules contain a carbon atom. They are the chemical substances where a carbon atom has bonded to an atom of another element. These compounds are generally organic. However, many are under the false impression can if a molecule contains carbon, it is organic.

Q5. What are the types of carbon compounds?

Ans. Carbon compounds may be organic, organometallic, or inorganic.

Q6. What are the properties of carbon compounds?

Ans. The properties of carbon compounds (covalent compounds) are as follows: