Refraction Of Light Through A Glass Prism

Refraction Of Light Through A Glass Prism

A glass prism is a five-sided solid with a triangular cross-section. It has two parallel, triangular faces and three rectangular faces that are inclined to each other at some suitable angle, which is called the angle of prism.

In the given figure ΔABC is a glass prism of angle A. A ray of light PE is incident on the face AB of the prism at an angle ∠PEN1 = i (the angle of incidence). N1N is normal to the face AB at E. 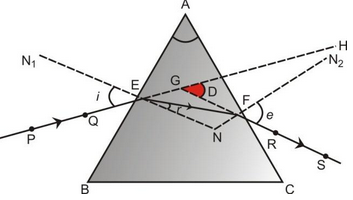 The incident ray PE after refraction at E follows the path EF at an angle ∠FEN = r (the angle of refraction). Since this ray is going from air (rarer medium) to prism (denser medium), so it bends towards normal N1N.

The refracted ray EF suffers second refraction at F and follows the path FS at an angle ∠N2FS = e, known as the angle of emergence. Since, it is going from denser medium (glass prism) to rarer medium (air) so it bends away from normal N2N.

The deviation of a ray on passing through a prism depends on angle of prism ‘A’ and angle of incidence ‘i’ of the ray on one face of the prism.

DISPERSION OF WHITE LIGHT BY A GLASS PRISM

The phenomenon of splitting up of white light into its constituent seven colours on passing through a prism is called dispersion of light.

In the year 1665, Newton discovered that if a beam of white light is passed through a triangular glass prism, the white light splits to form a band of seven colours on a white screen held on the other side of the prism. 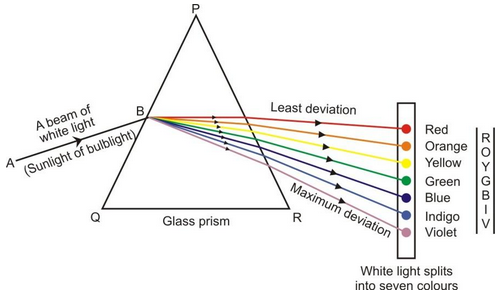 This band of seven colours formed on the white screen, when a beam of light is passed through a glass prism, is called spectrum of white light.

The colour sequence obtained on the screen is given by the famous acronym VIBGYOR where :

I stands for Indigo

B stands for Blue

For this experiment, two prisms P1 and P2 of the same material and of the same refracting angle A are arranged as shown is figure. Sunlight from a narrow slit S falls on the first prism P1 with its base downwards and gets dispersed into constituent colours (VIBGYOR) and the bending takes place downwards. Now this dispersed light falls on the second prism P2 with its base upwards so that is deviates the light upwards.

It is found that the light coming out of the second prism P2 is almost white and is in direction parallel to the direction of light incident of the first prism P1. In fact, the two prisms P1 and P2 combined together effectively acts like a parallel sides glass slab. This shows that the Prism P1 simply disperses the white light into its constituent colours and the prism P2 recombines these colours to form white light. The prism P1 is called dispersing-prism and the prism P2 is known as recombination-prism.

FORMATION OF A RAINBOW

A rainbow is a natural spectrum appearing in the sky in the form of an arch of seven colours which is produced by the dispersion of sunlight by tiny water droplets, present in the atmosphere.

A rainbow is always formed in the opposite direction to that of the sun. The colours come from the dispersion of white light by raindrops suspended in air. The water droplets act like small prisms. Sunlight entering a drop gets refracted and is split into its component seven colours. These light rays of the component colours travel through the drop and fall on its other side.

These light rays get reflected and again fall on the surface of the drop and get refracted on the way out. The two refractions bend the light through a large angle, keeping them separate.

These lights of different colours emerging from the rain drops form a rainbow, such that the red colour is at the top and violet colour at the bottom.

Rainbow in the Sky