Mineral and Power Resources of Class 8

Sedimentary rock formations of plains and young fold mountains contain non-metallic minerals like limestone. Limestone deposits of Caucasus region of France, manganese deposits of Georgia and Ukraine and phosphate beds of Algeria are some examples. Mineral fuels such as coal and petroleum are also found in the sedimentary strata.

China and India have large iron ore deposits. The continent produces more than half of the world's tin. China, Malaysia and Indonesia are among the world's leading ten producers. China also leads in production of lead, antimony and tungsten. Asia also has deposits of manganese, bauxite, nickel, zinc and copper.

Europe is the leading producer of iron-ore in the world. The countries with large deposits of iron ore are Russia, Ukraine, Sweden and France. Minerals deposits of copper, lead, zinc, manganese and nickel are found in Eastern Europe and European Russia. 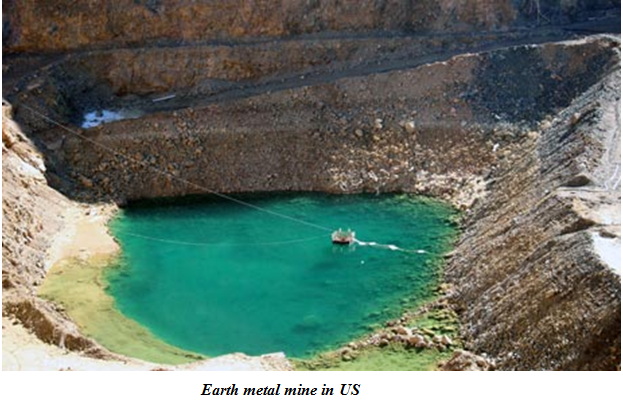 Brazil is the largest producer of high grade iron - ore in the world. Chile and Peru are leading producers of copper. Brazil and Bolivia are among the world's largest producers of tin. South America also has large deposits of gold, silver, zinc, chromium manganese, bauxite, mica, platinum, asbestos and diamond. Mineral oil is found in Venezuela, Argentina, Chile, Peru and Columbia.

It is the world's largest producer of diamonds, gold and platinum. South Africa, Zimbabwe and Zaire produce a large portion of the world's gold. The other minerals found in Africa are copper, iron ore, chromium, uranium, cobalt and bauxite. Oil is found in Nigeria, Libya and Angola.

Australia is the largest producer of bauxite in the world. It is a leading producer of gold, diamond, iron ore, tin. and nickel, it is also rich in copper, lead, zinc and manganese. Ka!goorlie and Coolagardie areas of Western Australia have the largest deposits of gold.

Significant size of deposits of coal in the Transantarctic Mountains and iron near the Prince Charles mountains of East Antarctica is forecasted. Iron ore, gold, silver and oil are also present in commercial quantities.

India is endowed with a rich variety of mineral resources due to its varied geological structure. Bulks of the valuable minerals are products of pre-Paleozoic age and are mainly associated with metamorphic and igneous rocks of the peninsular India. The vast alluvial plain tract of north India is devoid of minerals of economic use. The mineral resources provide the country with the necessary base for industrial development. A mineral is a natural substance of organic or inorganic origin with definite chemical and physical properties. Minerals may be grouped under two main categories of metallics and non-metallics. 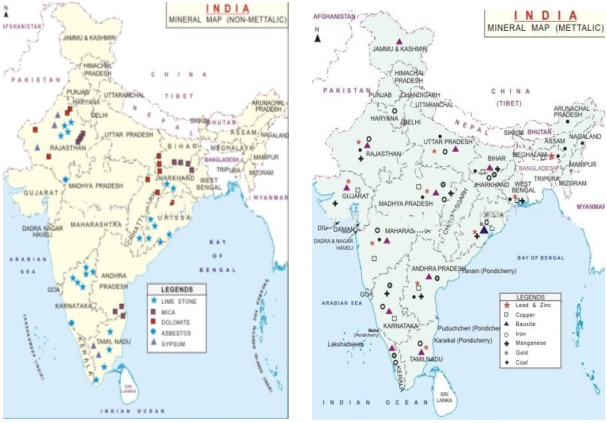 Distribution of Minerals in India

Most of the metallic minerals in India occur in the peninsular plateau region in the old crystalline rocks. Over 97 per cent of coal reserves occur in the valleys of Damodar, Sone, Mahanadi and Godavari. Petroleum reserves are located in the sedimentary basins of Assam, Gujarat and Mumbai High i.e. off-shore region in the Arabian Sea.

New reserves have been located in the Krishna-Godavari and Kaveri basins. Most of the major mineral resources occur to the east of a line linking Mangalore and Kanpur. Minerals are generally concentrated in three broad belts in India. There may be some sporadic occurrences here and there in isolated pockets.