Blood-vascular system is open and lacunar type. Body cavity contains blood, which bathes viscera in it therefore known as haemocoel. Blood-vascular system consists of a tubular heart, a blood vessel called anterior aorta and a system of ill- defined blood spaces or sinuses. 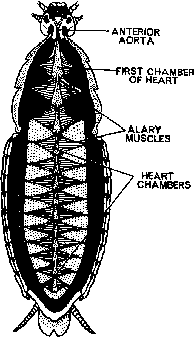 The pumping force that propels the haemolymph is provided by the pulsations of the ‘heart’. The respiratory movements of abdomen and contraction of alary muscles increase this force.

(a) From the pericardial sinus, the haemolymph enters into heart through ostia. When the heart is filled it contracts from behind forwards. This is its systole phase. Soon the heart becomes

normal in its diastole phase. Then the next systole follows after a short interval called diastasis. Thus, heart pulsates about 50 times/minute.

(b) During systole, the valve-like ostia close, prevent back-flow of haemolymph into the pericardial sinus. Therefore, some of its haemolymph is pumped into segmental vessels, while

most of it is poured into the head sinus through the terminally opening anterior aorta.

presence of oesophagus in dorsal part and so it fills into the perineural sinus.

(d) From the perineural sinus, the haemolymph, now flows into the perivisceral sinus through the pores of ventral diaphragm in abdominal region.

(e) Then from perivisceral sinus, it flows into pericardial sinus through the pores of dorsal diaphragm. Then, during heart’s diastole, it fills in the heart through the ostia.

Blood or haemolymph has a clear plasma and numerous corpuscles called haemocytes. Being devoid of any respiratory pigment, it does not serve for gaseous exchange. Its plasma contains about 70% water, rest of it is composed of amino acids, uric acid, proteins, sugars, fats and salts of Na, K, Ca and Mg. Transportation of these materials between different parts of the body is the main function of haemolymph.

A large and white, diffused fat body, divided into numerous flattened and solid lobules, fills most of the perivisceral sinuses around the gut. It is bounded by a fine membranous covering of connective tissue. Each lobule contains several types of cells — trophocytes, mycetocytes, oenocytes and urate cells performing various functions. The fat body of cockroach is functionally analogous to the liver of vertebrates.