The mouth opens in the buccal cavity that is surrounded by the vestibule, which is a space between the lips, cheeks, and teeth.

The oral cavity encloses large incisor teeth, molar teeth, the tongue, and the bony roof of the mouth or hard palate. The palate separates the nasal and oral cavities. Unlike carnivorous mammals whose teeth stop growing shortly after they emerge, the teeth of many herbivorous mammals continue to grow throughout life.

Stomach — Sac-like structure that serves as a storage site for ingested foods. The stomach is comprised of three areas that are morphologically similar but histologically different. These are the cardiac portion (entrance from the oesophagus), the fundic portion (large middle area), and the pyloric portion (constricted posterior portion). The stomach opens to the duodenum through the pyloric sphincter.

Small Intestine — Comprised of three regions which can be differentiated histologically.

Duodenum: The anterior portion receives the ducts from the digestive glands, pancreas, and liver. The second portion is the jejunum, most posterior is the ileum. 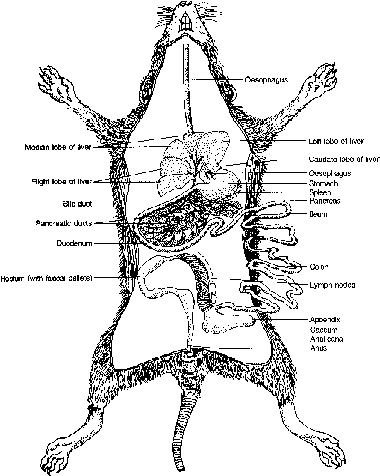 Rectum — The rectum is the continuation of the descending colon through the pelvic region. It terminates with the anus which opens externally.

There are four pairs of salivary glands. The first is the parotid gland which lies just beneath the ear and extends over the ventro-lateral surface of the neck to the shoulder. The submaxillary glands are just ventral to the slightly larger parotids and are inseparable from the more anterior overlying sublingual glands.

Fourth pair is of infra-orbital glands. Saliva contains the enzyme ptyalin that helps to digest starch of the food.

Q1. How long does it take for rats to digest food

Ans. The fasted body weight of each animal is determined and the dose is calculated according to the body weight. After the substance has been administered, food can be withheld for a similarly 3-4 hours in rats or 1-2 hours in mice.

Q2. Do rats and humans have the same digestive system?

Q3. Do rats have two stomachs?

Ans. The rat's stomach has two parts : Forestomach: thin-walled, non-glandular section that receives the esophagus and serves as a holding chamber for food. Its walls are similar to those of the esophagus.

Q4. Where can I get NCERT Solutions for Class 11?