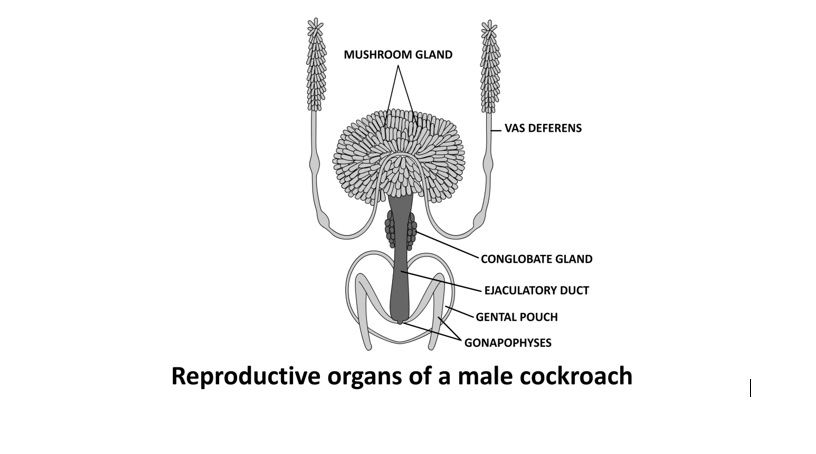 (a) Long tubules or Utriculi majores forming the peripheral part of gland.

out by a separate pore located close to the genital pore at hind end of body.

(a) Sperms start forming in the testes of a young cockroach. By the time it is fully grown, sperm formation in it slows down and testes become comparatively smaller.

(b) Mature sperms are conducted by vasa deferentia into the seminal vesicles for storage. All sperms are glued together into a large mass called spermatophore.

(c) During its discharge from a seminal vesicle into the ejaculatory duct, the spematophore becomes invested by a covering formed by milky secretion of long tubules of utricular gland.

This covering gives a pouch- like shape to the spermatophore with a small aperture on one side.

(d) The secretion of small tubules of utricular gland fills into the spermatophore through this aperture and nourishes the sperms.

(e) As the spermatophore reaches at about middle of the ejaculatory duct, it becomes invested by second covering.

(f) Finally, as copulation concludes, and a spermatophore is discharged, it becomes invested by a third covering formed by the secretion of phallic gland poured over it.

It includes a pair of ovaries and oviducts, a vagina, a genital pouch, a pair of collaterial glands, a pair of spermathecae and the external genitalia.

1. Ovaries : Like testes, these are elongated organs laterally extending, one on each side of abdomen, from its second to seventh segments. Each ovary is a loose group of eight long, thin and light yellow ovarian tubles or ovarioles having a flexible wall.

2. Oviducts : The pedicels of all the eight ovarioles of an ovary posteriorly join together, forming a small, thick and muscular oviduct.

3. Vagina : Two oviducts also join together medially in the seventh segment, forming a thicker and median common oviduct or vagina. The latter opens behind into a large genital pouch by a slit-like female gonopore located upon 8th sternite which is telescoped beneath the 7th sternite.

4. Genital pouch or gynatrium : Becoming broad and boat-shaped, the 7th sternite forms the floor of a large genital pouch. The 8th and 9th sternites become telescoped inwards to form the roof and sides of its pouch. The pouch itself is divisible into a genital chamber in front and oothecal chamber behind. The vagina and ducts of accessory reproductive glands open into the genital chamber. Oothecae are formed in the oothecal chamber. The posterior part of 7th sternite is divided into two large and oval gynovalvular plates or apical lobes.

5. Collaterial glands : These are a pair of white and highly branched accessory reproductive glands located dorsally to the genital pouch. The left gland is larger and more opaque than the right one. The secretions of the two glands also differ. Their ducts, however, join together distally and open into the genital chamber by a common pore.

6. Spermathecae : These are a pair of small structures located close to the collaterial glands. Left spermatheca is a relatively larger pyriform sac, while the right one is like a short, narrow duct. The ducts of both spermathecae distally join together and open into the genital chamber by a common pore located upon a spermathecal papilla.

7. External genitalia or gonapophyses : Three pairs of chitinous processes, hanging from the roof of oothecal chamber into its cavity, are the external genitalia of female cockroach. These are called ovipositor processes, because these serve to arrange the ova in a newly formed ootheca, and possibly help in giving proper shape to the ootheca.