MATHEMATICAL DERIVATION OF EQUATIONS OF MOTION

When the body is moving along a straight line with uniform acceleration, a relation can be established between velocity of the body, acceleration of the body and the distance travelled by the body in a specific time by a set of equations. These equations are called equations of motion.

The Three equations are:

Where u = initial velocity of the body

v = final velocity of the body

a = uniform acceleration of the body

Consider a body having initial velocity ‘u’. Suppose it is subjected to a uniform acceleration ‘a’ so that after time ‘t’ its final velocity becomes ‘v’. Now we now,

This equation is known as the first equation of motion.

This is the second equation of motion.

From the second equation of motion we have,

From first equation of motion, we have

Putting this value of ‘t’ in equation …(i) 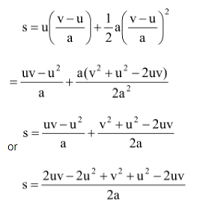 This is the third equation of motion

[distance covered by a body along a straight line in n second.

[distance covered by a body along a straight line in (n-1) sec.]

The distance covered by the body in nth second will be - 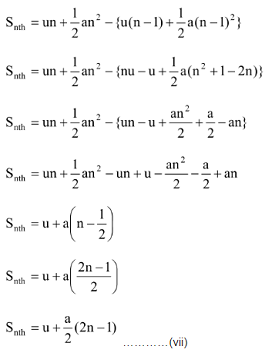 When an object is thrown in upward direction (taking positive) in space with initial velocity v0.

So, equation of motion will be

When an object is thrown in a downward direction (taking positive) in space with initial velocity v0.

So, equation of motion will be

Let initial velocity is v0 which is in vertically upward direction and finally comes down to the ground as shown in figure.

So using equation of motion, s =

Q1. A car is moving at a speed of 50 km/h. Two seconds thereafter it is moving at 60 km/h. Calculate the acceleration of the car.

Case (i): When speed (velocity) is uniform (constant): 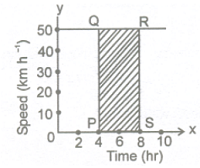 Case (ii) : When speed (velocity) as well as acceleration is non-uniform (variable)

Figure shows the speed- time graph of a body moving with variable speed and acceleration. Over a small interval of time, the speed can be taken as constant. For this small time interval, distance ΔS = vΔt = Area of the blackened strip.

For whole time-interval between t1 and t2

Distance = sum of area of all the strips between t1 and t2 = Area of shaded figure PQRS.

GRAPHICAL DERIVATION OF EQUATIONS OF MOTION

TO DERIVE v = u + at BY GRAPHICAL METHOD

Let us consider a body moving with uniform acceleration ‘a’ having initial velocity ‘u’ attains the final velocity v in time ‘t’ covering a distance ‘s’ as shown in the graph. 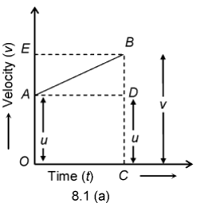 In the given velocity time graph,

To find the value of BD,

Acceleration, a = slope of line AB

Putting BD = at in equation (iii)

Let us consider a body moving with uniform acceleration ‘a’ having initial velocity ‘u’ attains the final velocity ‘v’ in time ‘t’ covering a distance s as shown in the graph 8.1 (a).

Then from the graph:

Distance travelled by the body = Area under the velocity time graph

To find the value of BD,

Acceleration, a= slope of line AB

Putting BD = at in equation (i) we get

Let us consider a body moving with uniform acceleration ‘a’ having initial velocity ‘u’ attains the final velocity ‘v’. In time ‘t’ covering a distance s as shown in the graph 8.1 (a).

Then from the graph:

To eliminate ‘t’ from the above equation

By putting this value in equation (i),

Motion of a particle (small body) along a circle (circular path), is called a circular motion. If the body covers equal distances along the circumference of the circle in equal intervals of time, the motion is said to be a uniform circular motion.

A uniform circular motion is a motion in which speed remains constant but direction of velocity changes.

Consider a boy running along a regular hexagonal track (path) as shown in figure. As the boy runs along the side of the hexagon at a uniform speed, he has to take turn at each corner changing direction but keeping the sped same. In one round he has to take six turns at regular intervals.

If the same boy runs along the side of a regular octagonal track with same uniform speed, he will have to take eight turns in one round at regular intervals but the interval will become smaller.

By increasing the number of sides of the regular polygon, we find the number of turns per round becomes more and the interval between two turns become still shorter. A circle is a limiting case of polygon with an infinite number of sides. On the circular track, the turning becomes a continuous process without any gap in between.

Example of uniform circular motion are:

Nature of Circular of Motion:

DIFFERENCE BETWEEN UNIFORM LINEAR MOTION AND A UNIFOR CIRCULAR MOTION:

RADIAN - (A UNIT FOR PLANE ANGLE):

An angle in radian is equal to the length of the arc subtending the angle divided by the radius of the circle.

Where θ = angle in radians

l = length of the arc

r = radius of the circle

Therefore, one radian is that angle that is subtended at the center of a circle by an arc having a length equal to the radius of the circle.

When the body moves on the circular path from A to B in time t. It also moves through an angle θ, which is known as the angular displacement of the body.

It is defined as the angular displacement per unit time

θ = Angle in radian, through which the body moves.

When a body is moving with uniform linear speed ‘v’ covering a distance ‘s’ in time ‘t’ on a circular path of radius ‘r’, subtending an angle θ at the center.

Putting this in equation (i)

Putting this in equation (ii)