Let us find out the time period of a spring-mass system oscillating on a smooth horizontal surface as shown in the figure(13.6).

At the equilibrium position the spring is relaxed. When the block is displaced through a distance x towards right, it experiences a net restoring force F = -kx towards left.

Note : That the time period is independent of the amplitude. For a given spring constant, the period increases with the mass of the block – a more massive block oscillates more slowly. For a given block, the period decreases as k increases. A stiffer spring produces quicker oscillations.

Note that gravity does not influence the time period of the spring-mass system, it merely changes the equilibrium position.

Series and Parallel Combinations of Springs

When two springs are joined in series, the equivalent stiffness of the combination may be obtained as

When two springs are joined in parallel, the equivalent stiffness of the combination is given by

As m1 is removed, the mass m2 will oscillate and so

Furthermore, the stretch produced by m1g will set the amplitude,

A horizontal spring block system of (force constant k) and mass M executes SHM with amplitude A. When the block is passing through its equilibrium position an object of mass m is put on it and the two move together. Find the new amplitude and frequency of vibration.

As initially mass M and finally (m + M) is oscillating,

and as at equilibrium position

(a)the displacement as a function of time

(c)the acceleration when x = +A/2, where A is the amplitude.

Thus, from the equation of displacement and velocity, we get

(b)In order to find the velocity we have to find phase when x = A/2. Equation (i) yields

The velocity is given by

At a given position, there are two velocities of equal magnitude but of opposite directions.

(c)The acceleration at x = A/2 may be found from the equation, 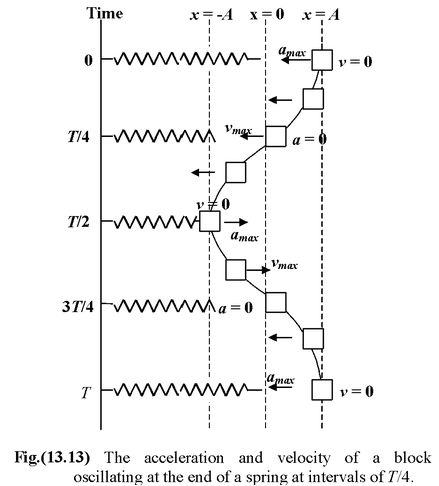 A particle of mass m is attached to three identical springs A, B and C each of force constant k as shown in figure. If the particle of mass k is pushed slightly against the spring A and released, find the time period of oscillations.

Two masses m1 and m2 are connected by a spring of force constant k and are placed on a frictionless horizontal surface. Show that if the masses are displaced slightly in opposite directions and released, the system will execute simple harmonic motion. Calculate the frequency of oscillation.

while that for m2 will be 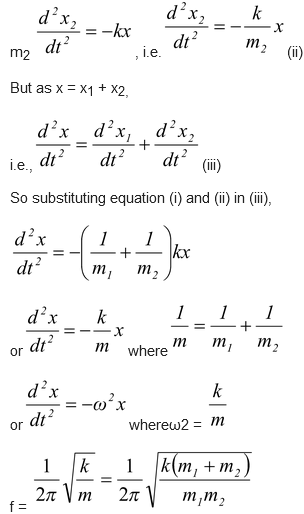 The angular displacement of simple pendulum is given by

The mass of the bob is 0.4 kg. Calculate

(a)the length of the simple pendulum; and