Sound is a form of energy which produces the sensation of hearing. This sensation is produced by longitudinal waves in an elastic medium.

A wave can be described as a disturbance that travels through a medium, transporting energy from one location to another location. The medium is simply the material through which the disturbance is moving. It can be thought of as a series of interacting particles.

In laboratory, sound is produced by a tuning fork when beaten with rubber pad, by plucking a stretched string of violin, by striking tabla, by blowing flute etc.

In humans, the sound is produced by the voice box or the larynx. Put your fingers on the throat and find a hard bump that seems to move when you swallow. This part of the body is known as the voice box. It is at the upper end of the windpipe. Two vocal cords are stretched across the voice box or larynx in such a way that it leaves a narrow slit between them for the passage of air.

When the lungs force air through the slit, the vocal cords vibrate, producing sound. Muscles attached to the vocal cords can make the cords tight or loose. When the vocal cords are tight and thin, the type or quality of voice is different from that when they are loose and thick.

The vibrating string of a musical instrument or the vibrating prongs of the tuning fork, set the molecules of the air surrounding them into vibration. These vibrating air molecules, in turn pass on their vibrations to the neighbouring air molecules and in this manner, sound travels to the listener in the form of waves. A wave is a disturbance which travels through a medium due to the vibratory motion of the particles of the medium. Sound cannot travel in vacuum. It always need a medium to travel.

SOUND NEEDS A MATERIAL MEDIUM FOR ITS PROPAGATION :

An electric bell is enclosed inside an inverted bell jar by hanging from the rubber cork. The jar is closed at the bottom by an airtight plate with a hole in the centre. A pipe through the hole leads out to a vacuum pump (pump which draws the air out of a vessel).

The bell is connected to a battery through a key.

The bell is started by closing the key. Initially when jar has normal air inside it, sound waves produced by the ringing bell heard outside the jar.

The vacuum pump is started and the air from inside the jar is gradually drawn out. With decrease air inside the jar, sound heard becomes weaker and weaker. After sometime no sound is heard, though the bell hammer is seen in vibration.

In the absence of medium (air) around the source, sound is not being propagated.

A natural fact : Moon has no atmosphere. The space above the atmosphere is also vacuum. If some explosion takes place on moon, sound of the explosion will not be propagated to the earth. So the sound waves never reach the earth.

Sound waves are of longitudinal type because these make the particles of the medium vibrate in the direction in which wave travels. A moving sound wave produces compressions (regions of more density and pressure) and rarefactions (regions of less density and pressure) alternately at regular time intervals. This wave can be graphically represented as:

The region of maximum density of medium in a longitudinal wave, is called compression.

The region of minimum density of medium in a longitudinal wave, is called rarefaction.

Since a sound wave consists of a repeating pattern of high-pressure and low-pressure regions moving through a medium, it is sometimes referred to as a pressure wave. If a detector, whether it is the human ear or a man-made instrument, were used to detect a sound wave, it would detect fluctuations in pressure as the sound wave impinges upon the detecting device. At one instant in time, the detector would detect a high pressure; this would correspond to the arrival of a compression at the detector site. At the next instant in time, the detector might detect normal pressure. And then finally a low pressure would be detected, corresponding to the arrival of a rarefaction at the detector site. The fluctuations in pressure as detected by the detector occur at periodic and regular time intervals. In fact, a plot of pressure versus time would appear as a sine curve. The peak points of the sine curve correspond to compressions; the low points correspond to rarefactions; and the "zero points" correspond to the pressure that the air would have if there were no disturbance moving through it. The diagram below depicts the correspondence between the longitudinal nature of a sound wave in air and the pressure-time fluctuations that it creates at a fixed detector location.

Intensity of a sound is an objective physical quantity. It does not depend on the response of our ears. 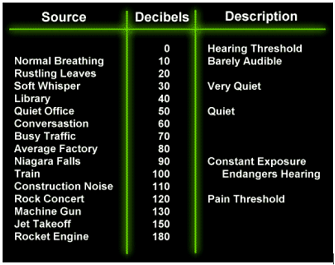 RELATION BETWEEN FREQUENCY AND TIME PERIOD

But the time taken to complete one vibration is called time-period T, hence

DIFFERENCE BETWEEN LOUDNESS AND INTENSITY OF SOUND: 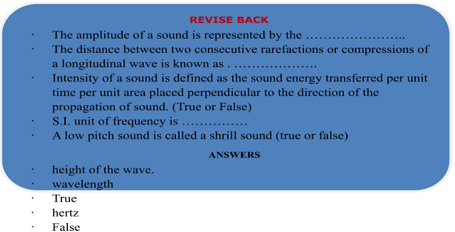