A body which does not under go deformation when it is subjected to an external force is called rigid body.

A body which undergoes deformation when subjected to an external force is called non rigid body.

A body can execute 3 types of motions

Rotatory motion: A body in which the particles move permanently around a fixed point point the the motion of the body is called rotatory motion.

Centre of mass is a point with in the boundaries of a system or a body at which its entire mass appears to be concentrated.

When two particles of masses m1 and m2 are located on a straight line, their centre of mass lies on the line joining the two particles.

Let r1 and r2 be the distance of the particles from their centre of mass respectively, then

Coordinates of centre of mass 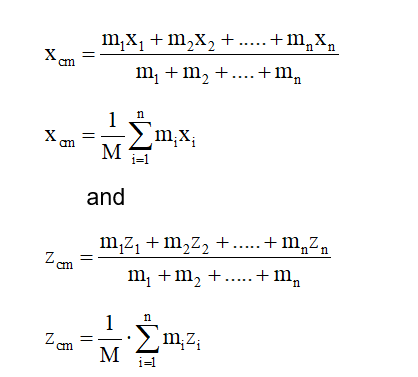 Position vector of centre of mass

Consider two particles of mass m1 and m2 whose position are represented by position vectors r1 and r2 respectively at an instant, then

Velocity and acceleration of centre of mass

Formula of Centre of Mass

Do follow NCERT Solutions for class 11 Physics prepared by expert faculty of Physics Wallah. We also have Physics Doubts section where the most common Physics doubts are explained by our expert faculty.