E – Thermo emf developed T – Temperature difference between junctions a, b – Constants for a given thermo couple 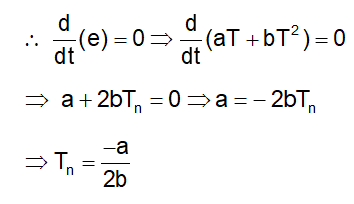 R – Resistance of wire t – Time for which current flow.

I = current through heater filament

Unit of Π: J/coulomb or volt.

The heat produced in a given resistor in a given time is proportional to the square of the current in it. i.e. Q ∝ i2.

The heat produced in a resistor by a given current in a given time is proportional to it’s resistance i.e. Q ∝R.

The heat produced in a given resistor by a given current is proportional to the time for which current flows in it. i.e. Q a t

If two wires of dissimilar metals are joined to form a closed loop and if the junction are maintained at different temperatures, an emf is developed in the circuit and a current flows through the circuit. This phenomenon is called “Seebeck effect”.

The temperature of hot junction at which thermo emf in the circuit is maximum is called  neutral temperature. It is constant for a given thermo couple.

The temperature of hot junction at which thermo emf becomes zero and tends to become negative is called inversion temperature. The difference between neutral temperature.