About one-fifth of the surface of the earth is exposed, solid and is called the land. The top surface layer of this land, capable of supporting plant growth is called soil. Over million years of time, the rocks at or near the surface of the earth are broken down by various physical, chemical and some biological processes to form fine soil particles.

Soil is a complex mixture, having five components: mineral matter – 45%, organic matter – 5%, water – 25%, air – 25% and living organisms. All these components are essential for plant growth. Temperature variations due to radiations of the sun, rainwater, winds and living organisms influence the formation of soil from the rocks.

Soil formation involves two processes: (i) weathering, and (ii) paedogenesis. Breakdown of bigger rocks into small, fine mineral particles is called weathering. It may occur due to physical, chemical or biological means. Paedogenesis involves the decomposition of organic materials by bacteria and fungi of decay and leads to humification and mineralization.

Soil profile shows four distinct layers, called horizons. Top soil forms horizon A. The horizon B has soil particles smaller and usually more compact than in the horizon C which consists of the weathered material. The latter is derived from the intact parent rock. The parent rock forms the horizon .

It is a serious environmental problem because it harbors many health risks. E.g., exposure to soil containing high benzene concentrations increases the risk of leukemia. It is important to note that all soils contain compounds that are harmful/toxic to humans and all other living organisms. Since the concentration of such substances in unpolluted soil is low enough to pose no threat to the surrounding ecosystem. Thus, when the concentration of one or more such toxic substances is high sufficient to cause harm to living organisms, the soil is considered contaminated. 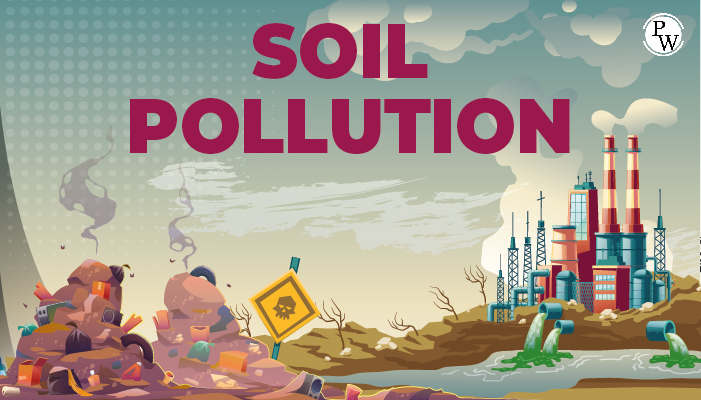 Soil pollution can be classified into two types:

In some extremely rare processes, some pollutants naturally accumulate in the soil. This can occur due to differential deposition of soil by the atmosphere. Another way this type of soil pollution can happen is by transporting soil pollutants with rainwater. Let's take an example of natural soil pollution as the accumulation of compounds containing perchlorate anion (ClO4–) in some dry arid ecosystems. It is also important that some contaminants may be naturally produced in soil under certain environmental conditions. For example, perchlorates can form in soils containing chlorine and certain metals during a thunderstorm.

Almost all the cases of soil pollution are anthropogenic. Various human activities can lead to soil contamination. Some processes are listed below.

Soil pollution hides a wide range of negative consequences that affect plants, animals, people and the ecosystem as a whole. Since children are more susceptible to disease, polluted soil poses a greater threat to them. Some important effects of soil pollution are detailed in this subsection.

Soil contaminants can exist in all three stages (solid, liquid, and gas). Therefore, these contaminants can enter the human body through several channels, such as direct skin contact or inhalation of contaminated soil dust.

The short-term effects of human exposure to pollutes soil include

Several long-term illnesses have been linked to soil pollution. Some such diseases are listed below.

Effects on Plants and Animals

Since a reduction in nutrient availability often accompanies soil pollution, plant life ceases to thrive in such soils. Soils contaminated with inorganic aluminum can be toxic to plants. This type of pollution also often increases the salinity of the soil, making it inhospitable for plant growth.

Plants grown in contaminated soil can accumulate high concentrations of soil pollutants through a process known as bioaccumulation. When herbivores consume these plants, any accumulated pollutants pass through the food chain. This can lead to the loss/extinction of many desirable animal species. These pollutants can also eventually reach the top of the food chain and manifest as diseases in humans.

Effects on the Ecosystem

Q1. What is Soil Pollution?

Ans. The presence of toxic chemicals (contaminants or pollutants) in the soil in high enough concentrations to pose a risk to humans is known as Soil Pollution.

Q2. How can soil pollution be controlled?

Ans. Properly recycle batteries, eat sustainable foodstuffs, produce homemade compost and dispose of drugs in the places authorized for this purpose. Encourage a more eco-friendly model for the industry, farming, and stock breeding, among other economic activities.

Ans. Pollutants in soil, groundwater, and the food chain can cause various diseases and excess mortality in humans, from short-term acute effects, such as intoxications or diarrhea, to long-term chronic effects, like cancer.

Q4. How does soil pollution affect the economy?

Ans. Quantifiable economic losses due to soil pollution are contamination of food products and loss of marketability, biodiversity reduction of water quality, loss of soil productivity, and decreased crop yields.

Q5. Which country has the most soil pollution?

Q6. Where does soil pollution occur?