The cell is the basic and functional, structural, and biological unit of all known living organisms. The cell is the smallest unit of life. Cells are called the building blocks of life. The study of cells is called cell biology. The human body consists of trillions of cells, all of which have particular functions. Cells are the basic or key structure of all living organisms. The cell provides structure to the body, receives nutrients from food, and performs important functions.

There are two types of cells: prokaryotic (bacteria) and eukaryotic (plant, animal, fungi). Prokaryotes do not have a nucleus - the DNA is in the cytoplasm and can form small circular strands of DNA called plasmids. Similarly, all eukaryotic cells have their DNA enclosed in a nucleus. A nucleus is an organelle that contains the genetic information for that organism. In an animal cell, the nucleus is located in the central location of the cell. Likewise, in a plant cell, the nucleus is located more on the periphery because of the large water-filled vacuole in the center.

The important integral component of the cell is the nucleus (plural: nuclei). It is derived from a Latin word “kernel of a nut.”

A nuclear membrane separates the nucleus from the rest of the cell or cytoplasm. A nucleus was the first organelle to be detected or discovered. Antonie van Leeuwenhoek observes a "lumen" in the nucleus in salmon red blood cells. Unlike mammalian red blood cells, those of other vertebrates still contain nuclei. 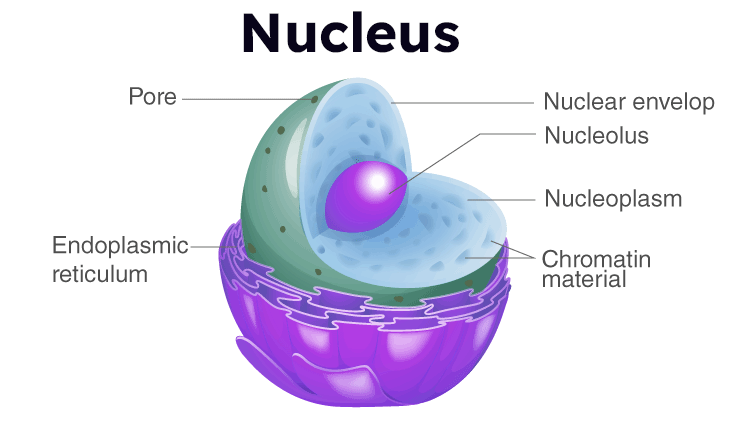 The nucleus was first observed by Robert Brown (1831). Nucleus plays determinative (in heredity) role in cell and organism, that was experimentally demonstrated by Hammerling (1934) by conducting surgical experiments with green marine unicelled algae Acetabularia.

A true nucleus with definite nuclear membrane and linear chromosome, is present in all the eukaryotes except mature mammalian RBCs, sieve tube cell of phloem, tracheids and vessels of xylem. The prokaryotes have an incipient nucleus, called nucleoid or prokaryon or genophore or false nucleus or bacterial chromosome.

Shape of Nucleus of a cell

The Parts of the Nucleus are:

The important features are mentioned below-

Different cell types are categorized based on the presence or absence of a cell. The different types are listed below.

Q1. Why is the nucleus critical in our life?

Ans. It regulates and controls the cell's activities (e.g., growth and metabolism) and carries the genes and structures that contain the hereditary information. Nucleoli are small bodies often seen within the nucleus.

Q2. What controls entry into the nucleus?

Ans. The nuclear pore is a protein-lined channel in the nuclear envelope that regulates the transportation of molecules between the nucleus and the cytoplasm.

Q3. What controls entry into the nucleus?

Ans. The nuclear pore is a protein-lined channel in the nuclear envelope that regulates the transportation of molecules between the nucleus and the cytoplasm.

Q4. Which type of cell has a nucleus?

Ans. If the distribution of mass or /and charge within the nucleus becomes non-spherical then the nucleus will be able to rotate. The rotation is known as “collective” because many of the nucleons (the protons and neutrons) are involved.