Air is an important form of inexhaustible natural resource which is essential for our survival. In a world without air, there would be no plant or animal life; no fire as burning needs oxygen; no protection from harmful solar radiation; and great temperature variation (from about 110° C at day time to about – 184°C at night).

surface of earth here. It is a medium for locomotion of flying animals, helps in dispersal of seeds and fruits; region of cloud formation.

troposphere of UV rays and cosmic rays of the sun.

At a height between 15 kms and 60 kms, there is a layer of ozone gas in the upper atmosphere. This ozone layer is very important for the existence of life on earth. This is because ozone layer absorbs most of the harmful UV radiations coming from the sun which can otherwise cause inflammatory diseases, skin cancer, cataract etc. A normal human being requires about 250 to 265 kg air per day for performing various activities.

Air is essential for the survival and continuity of life as its constituents are needed for various biological processes.

The various gases present in the air have different functions. They are:

The role of air in climate control

Air is a bad conductor of heat. The atmosphere (envelope of air) acts as a protective blanket for living organisms in the following ways:

THE MOVEMENT OF AIR WIND:

All the places on Earth are not equally heated up by the sun. When a place becomes heated, the surrounding air also becomes warm. The warm air, being lighter, rises up. A low pressure area is created there. The cold air from the cooler and high pressure regions then moves in to take its place. This movement of air takes place due to uneven heating of different places on the Earth. Due to the unequal heating of places, convection currents are produced in the air. When air moves horizontally, it is called wind. Water vapours are formed due to the heating of water bodies by solar radiations as well as the activities of living organisms.The phenomena like movement of air (whether the movement of air will be in the form of a gentle breeze, a strong wind or a terrible storm) and the rain are the result of changes that take place in our atmosphere due to the uneven heating of air and the formation of water vapours. However, couples of other factors like the rotation of Earth, the presence of mountain ranges in the path of the winds also influence.

Air in called wind. Speed of wind can be determined by:

During the daytime, the air above the land gets heated faster than water. Hot air above land rises creating a low pressure area and air from the sea moves into this area. Thus, movement of air takes place from the sea side to the land side. This is called sea breeze. During night, both the land and the sea start cooling. But the cooling of sea takes place at a slower rate than that of the land. Thus, a low pressure area is created in the sea. The air then moves from the land to the sea. This is called land breeze.

These breezes always occur in the coastal areas.

sea during night in coastal areas.

Clouds and rain (Condensation and precipitation of water vapour)

During the day, a large amount of water vapour goes to air which then rises up, expands and gets cooled. When the temperature falls below the dew point, the excess of water present in the air gets condensed around the dust particles forming tiny droplets of water. When the temperature drops further, these droplets get condensed into tiny crystals of ice which being light floats in the sky. Millions of such droplets come together to form larger droplets called clouds. When these droplets become big enough and heavy, they cannot stay in the air. They come down on Earth as rain.

Patterns of rainfall of an area or region are determined by the prevailing wind patterns. In large parts of our country, rains are mostly brought by the south-west monsoons and to a smaller extent by north-east monsoons.

Any material or act of man, or nature which leads to pollution is called as pollutants. The pollution is usually brought about by the addition to the environment of waste products of human activity. When the waste products are not efficiently assimilated, decomposed or other wish removed by natural, biological and physical processes (recycling) and the system is unable to utilize them properly, so that the balance of the system breaks down. Therefore such type of pollutants can stimulate or inhibit the biological reactions or change in their capacity. Therefore changes also take place in the ecosystem. The amount, numbers and types of pollutants are increasing with the growth of the population.

Air pollution is caused due to the addition of the unwanted substances or gases. The atmospheric pollution is mainly caused by the activities of man and concentrated to the inhabited and the industrial complexes in cities. There are two main categories of air pollutants.

Major air Pollutants and Their Effects : 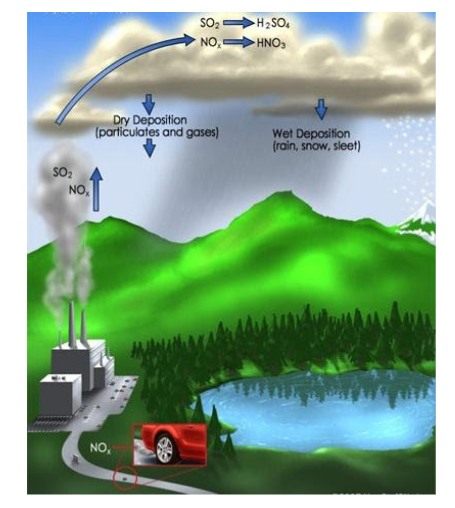