Carbon And Its Compound of Class 10

The word ‘Detergent’ means cleaning agent and so the detergents are substances which remove dirt and have cleansing action in water. According to this definition of detergents, soap is also a detergent and has been used for more than two thousand years.

There are two types of detergents:

(i) Soapy detergents or soaps

Soap is prepared by heating oil or fat of vegetable or animal origin with concentrated sodium hydroxide solution (caustic soda solution). Hydrolysis of fat takes place and a mixture of sodium salt of fatty acids thus formed are used as soap so alkaline hydrolysis of oils and fats is commonly known as saponification.

Soap is not suitable for washing clothes with hard water because of the following reasons:

Therefore, a lot of soap is wasted if water is hard.

(b) When hard water is used, soap forms insoluble precipitates of calcium and magnesium salts, which stick to the cloth being washed. Therefore, it interferes with the cleaning ability of the soap and makes the cleaning process difficult.

Detergents are also called ‘soap-less soaps’ because though they act like a soap in having the cleansing properties, they do not contain the usual ‘soaps’ like sodium stearate, etc.

A detergent is the sodium salt of a long chain benzene sulphonic acid (or the sodium salt of a long chain alkyl hydrogensulphate) which has cleansing properties in water. A detergent has a large non-ionic hydrocarbon group and an ionic group like sulphonate group, SO3–Na+, or sulphate group SO4–Na+. Examples of detergents are : Sodium n- dodecyl benzene sulphonate and Sodium n-dodecyl sulphate. These are shown below :

Synthetic detergents are prepared by reacting hydrocarbons from petroleum with conc. Sulphuric acid and converting the product into its sodium salt. 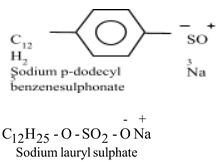 COMPARISON BETWEEN PROPERTIES OF SOAPS AND DETERGENTS:

ADVANTAGES OF SYNTHETIC DETERGENTS OVER SOAPS:

Synthetic detergents are widely used as cleaning agents these days. Some of their advantages over soaps are:

CLEANSING ACTION OF SOAPS AND DETERGENTS:

Both soaps and detergents are made up of two parts, i.e., a long hydrocarbon tail and a negatively charged head. The hydrocarbon tail being non-polar is insoluble in water and hence is hydrophobic(water repelling). On the other hand, the negatively charged head being polar is soluble in water and hence is hydrophilic(water-attracting). 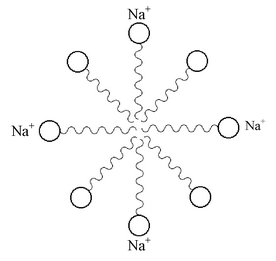 When a soap or a detergent is added to water the polar heads of their molecules dissolve in water while non-polar tails dissolve in each other. As a result, the soap or the detergent forms spherical ionic micelles, i.e., clusters of about 100-200 molecules with their polar heads (shown by solid circles) on the surface of the cluster and the non-polar chains (shown by wavy lines) directed towards the centre. In a similar way, detergents also form ionic micelles. These micelles remain suspended in water as a colloid and will not come together to precipitate out due to repulsion between the similar negative charges.

The dirt is generally held to the surface of a dirty cloth by a thin film of oil or grease. When a dirty cloth is treated with soap or detergent solution, the non-polar hydrocarbon tails of the soap or the detergent dissolve in oil or grease while the polar heads are held by the surrounding water. The stepwise formation of these micelles is shown in figure. In other words, soap or the detergent is attracted to both the greasy dirt and water. This lowers the surface tension of water and a stable emulsion of oil in water is formed. 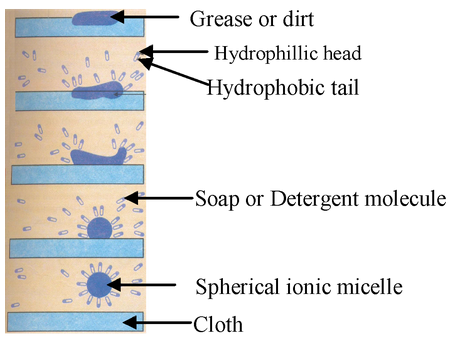 When the surface of the cloth is mechanically scrubbed or beaten on a stone or with a wooden paddle or agitated in a washing machine, the loosened oily dirt particles are removed from the dirty surface and the cloth is cleaned. Since detergents lower the surface tension of water to a greater extent than soaps, therefore, the cleansing power of detergents is much higher than those of soaps.

It may be noted that in the past, the widespread use of detergents caused pollution of rivers and other water bodies. Earlier the synthetic detergents were made from long chain of hydrocarbons having a lot of branched chains in them. These branched chain detergent molecules were degraded very slowly by the micro organisms present in water bodies like lakes or rivers.

Therefore, they tend to remain in water bodies for a long time and make water unfit for aquatic life. For example, detergents containing phosphates can cause rapid growth of algae and therefore, deplete the dissolved oxygen present in the water of lakes and rivers. As a result of lack of oxygen, fish and other aquatic animals may die.

To solve these problems, now-a-days, the detergents are prepared from hydrocarbons which have minimum branching. These are degraded more easily than branched chain detergents. Therefore, these are biodegradable and create fewer problems.

1. Why is carbon tetravalent ?

Solution: Carbon atom has 4 electrons in the outermost shell.It needs 4 more electrons to complete its octet. Therefore , carbon is tetravalent

2. What would be the electron dot structure of carbon dioxide which has the formula CO2?

Solution: The valency of carbon in all its compounds whether saturated or unsaturated is 4.

4. Why is high temperature not favourable for alcoholic fermentation?

Solution: The high temperature destroys the enzymes which are needed to carry fermentation .

6. What are the two properties of carbon which lead to the huge number of carbon compounds we see around us?

Sol. The two features of carbon that give rise to a large number of compounds are as follows:

(i) Catenation − It is the ability to form bonds with other atoms of carbon.

(ii) Tetravalency − With the valency of four, carbon is capable of bonding with four other atoms.

7. Draw the structures for the following compounds.

*Are structural isomers possible for bromopentane?

(ii) There are many structural isomers possible for bromopentane. Among them, the structures of three isomers are given. 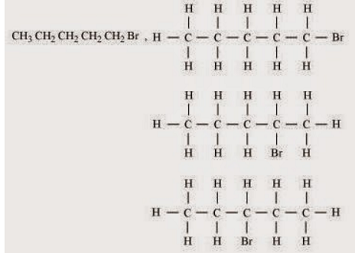 8. What is the difference in the molecular mass of any two adjacent homologues?

9. Which substance is added to denature ethyl alcohol?

10. Which gas is evolved when sodium carbonate or bicarbonate is added to ethanoic acid ?

11. Explain the formation of scum when hard water is treated with soap.

Solution: Soap does not work properly when the water is hard. A soap is a sodium or potassium salt of long chain fatty acids. Hard water contains salts of calcium and magnesium. When soap is added to hard water, calcium and magnesium ions present in water displace sodium or potassium ions from the soap molecules forming an insoluble substance called scum. A lot of soap is wasted in the process.

12. What change will you observe if you test soap with litmus paper (red and blue)?

Solution: Since soap is basic in nature, it will turn red litmus blue. However, the colour of blue litmus will remain blue.

13. What is hydrogenation? What is its industrial application?

This reaction is applied in the hydrogenation of vegetables oils, which contain long chains of unsaturated carbons.

14. Explain the mechanism of the cleaning action of soaps.

The dirt present on clothes is organic in nature and insoluble in water. Therefore, it cannot be removed by only washing with water. When soap is dissolved in water, its hydrophobic ends attach themselves to the dirt and remove it from the cloth. Then, the molecules of soap arrange themselves in micelle formation and trap the dirt at the centre of the cluster. These micelles remain suspended in the water. Hence, the dust particles are easily rinsed away by water.

15. Give a test that can be used to differentiate chemically between butter and cooking oil.