CIRCUMFERENCE OF A CIRCLE

The collection of all the points in a plane, which are at a fixed distance from a fixed point in the plane, is called a circle. 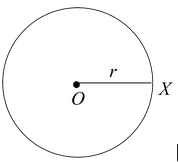 CIRCUMFERENCE OF A CIRCLE:

The circumference of a circle is the length of the complete circular curve constituting the circle.

CHORD OF A CIRCLE:

ARC OF A CIRCLE:

. The larger part is called a major arc as shown in figure (iii). It is denoted by

where P is a point on this part of the arc.

Length of an arc

The length of an arc

is the length of the fine thread which just covers the arc completely. If

is the major arc and

is the minor arc, then we get that 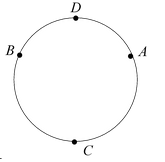 INTERIOR OF A CIRCLE:

The plane region lying in the circle as shown in figure is called the interior of the circle. 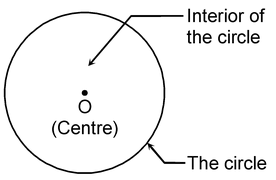 The circle and its interior both as a whole constitutes the circular region.

SEGMENT OF A CIRCULAR REGION:

Two circles are congruent to each other if and only if they have equal radii.

A diameter is the longest chord and all diameter have the same length, which is equal to two times the radius. In figure, AOB is a diameter of circle.

The region between an arc and the two radii, joining the centre to the end points of the arc is called a sector. Like segments, we find that the minor arc corresponds to the minor sector and the major arc corresponds to the major sector. In figure, the region OPQ in the minor sector and the remaining part of the circular region is the major sector. When two arcs are equal, then both segments and both sectors become the same and each is known as a semicircular region.

Equal chords of a circle subtend equal angles at the centre.

Given :AB and CD are the two equal chords of a circle with centre O. 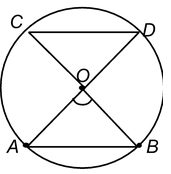 Converse of above Theorem:

In the angles subtended by the chords of a circle at the centre are equal, then the chords are equal. 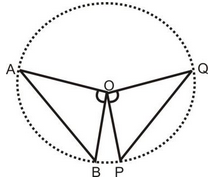 Given :∠AOB and ∠POQ are two equal angles subtended by chords AB and PQ of a circle at its centre O.

question 1 AB is a chord of a circle having centre at O. If ∠AOB = 60º, prove that the length of chord AB is equal to radius.

⇒ ΔOAB is an equilateral triangle.

The perpendicular from the centre of a circle to a chord bisects the chord.

Given:  A circle with centre O. AB is a chord of this circle. OM

Converse of above Theorem:

The line drawn through the centre of a circle to bisect a chord a perpendicular to the chord.

Given :A circle with centre O. AB is a chord of this circle whose mid-point is M.

There is one and only one circle passing through three given non-collinear points. 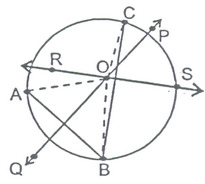 O lies on the perpendicular bisector PQ of AB.

O lies on the perpendicular bisector RS of BC.

i.e., the points A, B and C are at equal distances from the point O.

question 2 In the given figure, AB is the diameter of the circle. If C is a point on the circle such that 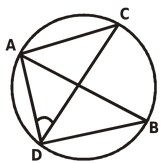 Solution: Given AB is the diameter,

As AB is the diameter of the circle,

BDC ( As angles in the same segment are equal)

question 3 In figure, AB = CB and O is the centre of the circle. Prove that BO bisects

Solution: Given: In figure, AB = CB and O is the centre of the circle. 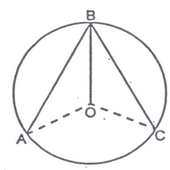 question 4 A, B and C are three points of a circle whose centre is not indicated. How will you located the centre.

will meet at O which will be centre. 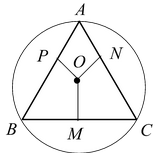 question 5 Two circles with centres A and B intersect at C and D. Prove that ∠ACB = ∠ADB.

Solution: Given :Two circles with centres A and B intersect at C and D.

BC = BD [Radii of the same circle]

question 6 In figure, AB≅ACand O is the centre of the circle. Prove that OA is the perpendicular bisector of BC.

Solution: Given :In figure, AB≅AC and O is the centre of the circle.

To Prove :OA is the perpendicular bisector of BC.

If two arcs of a circle are congruent, then their corresponding chords are equal.]

Equal chords of a circle subtend equal angles at the centre] 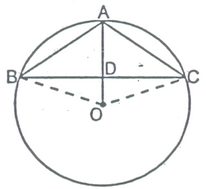 So, by (iii) and (iv), OA is the perpendicular bisector of BC. Hence Proved.

question 7 Two circles with centres A and B intersect each other at P and Q and M is the mid-point of PQ. Give reasons fro the following statements:

Solution: (i) M is the mid point of chord PQ. A is centre

AMB is a straight line.

question 8 In the following figure, the bisectors of angles BAD and BCD intersect the circle at E and F respectively. If 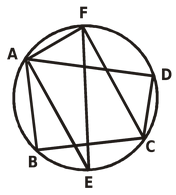 Solution: In the figure, if 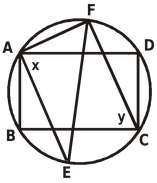 As angles in the segment are equal

Equal chords of a circle (or of congruent circles) are equidistant from the centre (or centres). 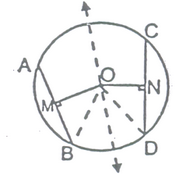 [The perpendicular drawn from the centre of a circle to bisect the chord.]

Side BM = Side DN [Proved above]

Chords equidistant from the centre of a circle are equal in length.

question 9 In a circle of radius 13 cm find the distance of a chord of length 24 cm, from the centre. 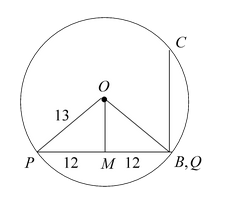 PC is a diameter

question 10 AB and CD are equal chords of a circle whose centre is O. When produced, these chords meet at E. Prove that EB = ED.

Solution: Given :AB and CD are equal chords of a circle whose centre is O. When produced, these chords meet at E. 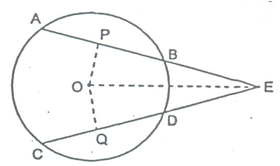 Equal chords of a circle are equidistant from the centre]

Side OP = Side OQ [Proved above]

question 11 Bisector AD of ∠BAC of ΔABC passed through the centre O of the circumcircle of ΔABC. Prove that AB = AC.

Solution: Given :Bisector AD of ∠BAC of ΔABC passed through the centre O of the circumcircle of ΔABC,

Chords equidistant from the centre are equal] Hence Proved.

Given: An arc PQ of a circle subtending angles POQ at the centre O and PAQ at a point A on the remaining part of the circle.

Construction :Join AO and extend it to a point B.

In all the cases,

∴ ∠OAQ = ∠OQA ...(ii) [Angles opposite equal of a triangle are equal]

NOTE :For the case (c), where PQ is the major arc, (v) is replaced by reflex angles.

Angles in the same segment of a circle are equal.

Proof: Let P and Q be any two points on a circle to form a chord PQ, A and C any other points on the remaining part of the circle and O be the centre of the circle. Then, 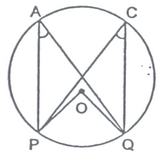 From above equations, we get 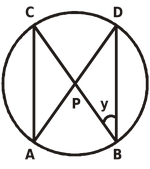 Angle in the semicircle is a right angle. 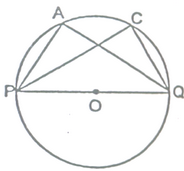 Proof :∠PAQ is an angle in the segment, which is a semicircle.

If we take any other point C on the semicircle, then again we get

If a line segment joining two points subtend equal angles at two other points lying on the same side of the lien containing the line segment the four points lie on a circle (i.e., they are concyclic).

Given :AB is a line segment, which subtends equal angles at two points C and D. i.e., ∠ACB = ∠ADB.

Proof :Let us draw a circle through the points A, C and B.

Suppose it does not pass through the point D.

If points A,C,E and B lie on a circle,

∠ACD = ∠AEB [∴ Angles in the same segment of circle are equal]

This is possible only when E coincides with D. [As otherwise ∠AEB >∠ADB]

Similarly, E’ should also coincide with D. So A, B, C and D are concyclic. Hence Proved. 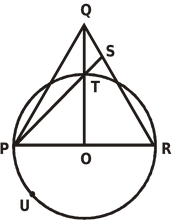 PTO = 700 (both are vertically opposite angles)

As PR is the diameter of the circle,

question 14. In the given figure,

ABD is equal to 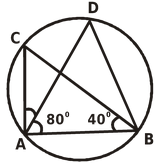 A quadrilateral ABCD is called cyclic if all the four vertices of it lie on a circle.