Force and pressure of Class 8

The thrust (compressive force acting perpendicularly to the surface) acting per unit area is called pressure.

From the definition of Pressure, it is clear that pressure is inversely proportional to the area of contact i.e.,

This shows that lesser the area of contact more is the pressure and vice versa.

VARIATION OF PRESSURE WITH AREA

A small pressure applied on the flat top through falling hammer becomes a large thrust. The same thrust acts on the wooden board through the pointed end of the nail. It result in a large pressure. The nail can easily be fixed in the wooden board.

A small force of fingers makes the needle pierce into the cloth easily and sewing becomes quicker.

An angry child in arms prefers biting her mother with her tiny sharp teeth rather than punching her with fist.


A cone about 12 cm high such that the area of the broad end is 5 cm or less, a large amount of wet sand, 1 kg weight or a brick.

Method:Now, repeat the experiment with narrow end of the cone. You will notice that the depression in case of narrow end is more than in the case of the broad end. 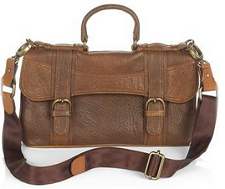 Why a sharp knife cuts better than a blunt knife?

It is for the same reason that a drawing pin is kept broad at the thumb side, but very sharp at the pin side. The broader thumb tack reduces the pressure on the thumb, but the sharp pin tip increases the pressure on wooden board, and hence, it can easily penetrate in it.

Why heavy vehicles have broad / multiple tyres or broad chains?

Rear wheels of buses or the trucks are provided with double wheels. It is because most of the weight of these vehicles is towards their rear axle. Thus, to prevent the tyres from sinking in the ground or to prevent damage to the roads, double wheels are provided. The double wheels increase the area of cross-section, and hence, decrease the pressure. It is for the same reason that tank trailers are provided with 16 wheels or more.  The army tank is made to move over broad steel tracks rather than on the wheels, as the broad tracks increase the area of contact and reduce the pressure on the ground. 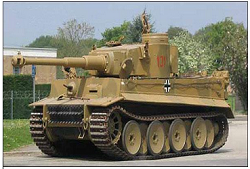 Why skiers have flat and long skies?

The skiers use flat and long skies to slide on the snow, because the larger the area of contact the lesser is the pressure on the snow.

Why porters / coolies place around cloth on their head?

Pressure exerted by the heel of a girl

Pressure exerted by the elephant = F/A 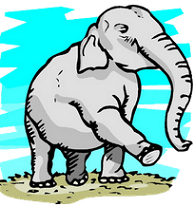 Pressure exerted by the elephant

Experiment: To prove that the pressure exerted by a liquid increases with the height (depth) of the liquid.

Materials required: To one end of the glass tube, tie a small membrane cut from a balloon. Now hold the tube in a vertical position and pour water in it, such that half the tube is filled with water. Observe the bulge produced in the membrane. 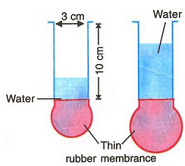 Experiment: To prove that pressure exerted by a liquid increases with the density of liquid.

We have learnt that pressure in liquids increases with depth.

Deep sea divers have to wear specially designed suits, otherwise the huge pressure of water will crush their bodies.