Force Laws of Motion of Class 9

Momentum is a vector quantity and its direction is in the direction of velocity.

According to this law, the rate of change of momentum of an object is proportional to the applied unbalanced force in the direction of force.

Now, Rate of change of momentum

So, according to this law,

Suppose of an object

u = initial velocity along a straight line

t = time for which the force is applied

Rate of change of momentum

= rate of change of velocity

= acceleration of the object (a)

from equation (ii) into (i)

Rate of change of momentum = m × a

where k is a constant of proportionality. The value of constant k in S.I. units is 1, so the above equation becomes :

The S.I. unit of force is Newton which is denoted by N. A Newton is that force which when acting on a body of mass 1 kg produces an acceleration of 1 m/s2 in it.

The second law of motion gives us a method to measure the force acting on an object as a product of its mass and acceleration. While calculating, if a minus sign comes with the force, it will indicate that the force is acting in a direction opposite to that in which body is moving. Since force is a vector quantity.

Some of our day-to-day observations can be explained in terms of Newton’s second law of motion.

∴ The force F can be reduced by increasing the time taken t for the change in momentum of the body. For example :

(i) Catching a cricket ball: To catch a fast cricket ball, a player pulls his hands backwards to prevent injury to his hands. By doing so, the player increases the time during which high velocity of the cricket ball reduces to zero. Thus, the acceleration of the ball

is decreased, and therefore, the impact of catching the fast ball (i.e., F = ma) is reduced, i.e., the player has to apply a smaller force against the ball in order to stop it. The ball, in turn, exerts a smaller force on his hands and the hands are not injured. 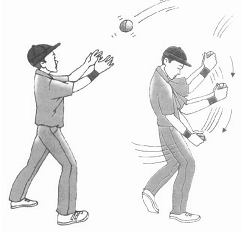 (iii) Use of seat belts in cars: All the cars these days are provided with seat belts for the passengers, which are rightly called safety belts. The purpose of seat belts is to prevent injuries to the passengers in case of an accident or in case of sudden application of brakes. In both the cases, the momentum of the car reduces to zero in a very short interval of time resulting in the development of a large force causing injuries. The stretchable safety belts worn by the passengers of the car exert a force on their body and make the forward motion slower. Thus, the time taken by the passengers to fall forward increases. Therefore, rate of change of momentum of passengers is reduced. Hence, the stopping force acting on the passengers is reduced. They may not get injuries at all or they may get away with minor injuries.