A projectile motion near the surface of the earth consists of two independent motions, a horizontal motion at constant speed and a vertical one subject to the acceleration due to gravity.

In order to deal with problems in projectile motion, one has to choose a coordinate system and clearly specify the origin. If the x axis is horizontal and the y−axis points vertically upward, then

One can easily assume the origin such that the initial horizontal coordinate is zero.

The equations of kinematics for projectile motion are

(a)Find its time of flight

(b)Find its horizontal range R (the horizontal displacement from the point of firing).

The coordinates at a latter time are given by

(a)When the ball lands, its vertical coordinate is zero

Note that the time of flight does not depend on the value of the horizontal component of the initial velocity. If the ball were dropped from the same height it would have reached the ground in 3 s. 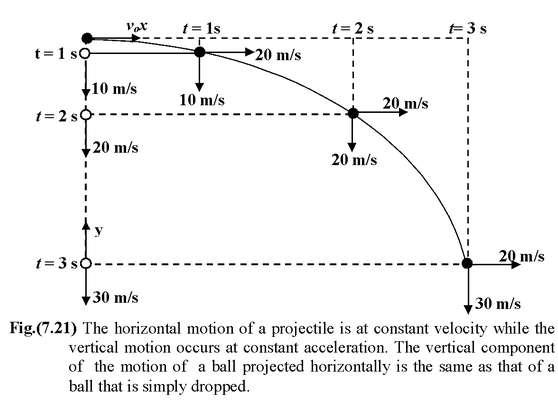 (a)Find the time of flight

(c)Determine the maximum height obtained by the ball

(d)Obtain an expression for the trajectory of projectile

The origin is assumed at the point of projection. The instantaneous x and y coordinates of the ball are given by

(b)To find the horizontal range we substitute (iii) in (i)

A hunter with a blowgun wishes to shoot a monkey hanging from a branch. The hunter aims right at the monkey, not realizing that the dart will follow a parabolic path and thus fall below the monkey. The monkey, however seeing the dart leave the gun, lets go of the branch and drops out of the tree, expecting to avoid the dart. Show that the monkey will be hit regardless of the initial velocity of the dart so long as it is great enough to travel the horizontal distance to the tree before hitting the ground.

Let the horizontal distance to the tree be x and the original height of the monkey be H, as shown in Fig. (7.24). Then the dart will be projected at an angle given by tan θ = H/x

If there were no gravity, the dart would reach the height H in the time t taken for it to travel horizontal distance x: