Note that equation (7.28) is a vector sum we worry about signs only when we take components. Let us consider the case where a man walks across a train with velocity vo. The ground forms a stationary frame (x, y) while the train forms a moving frame (x′, y′). We want to find the velocity of the man relative to the ground (v). 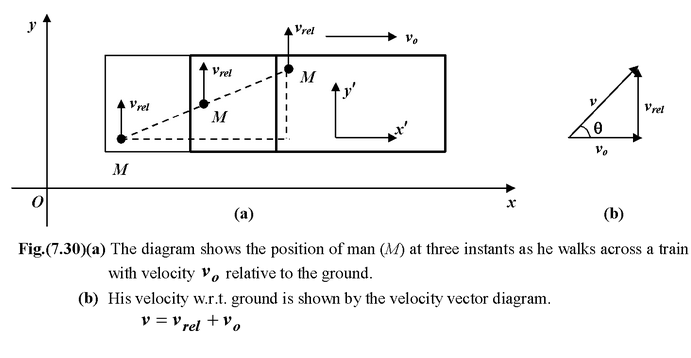 A boat can travel at 10 m/s relative to the water. It starts at one bank of river that is 100 m wide and flows with a velocity u = 7.5 m/s. If the boat points directly across, find

(a)Its velocity relative to the bank

From the velocity diagram

The magnitude of the velocity w.r.t. bank is

The direction of motion of the boat w.r.t. the river current is represented by the angle θ measured anticlockwise from the y−axis.